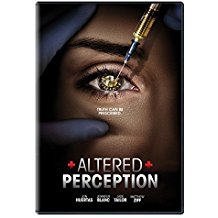 “Drugs are tested by the people who manufacture them, in poorly designed trials, on hopelessly small numbers of weird, unrepresentative patients, and  analyzed using techniques which are flawed by design, in such a way that they exaggerate the benefits of the treatments.” Forbes

This is the quote that opens up the film Altered Perception. It lets us know right out of the gate that we are about to watch a film that involves drug testing. Unfortunately, it doesn’t quite deliver.  The cover art shows us a needle as it’s about to be injected into the eye with a government logo on the eye.  It’s a little amusing considering the film is supposed to be about false perceptions that people develop, and, well, for what the film really is, it’s a bad take on couples therapy.

There are three sets of couples; each one is dealing with their own set of hangups that range from jealousy to loyalty to rape accusations.  The drug they are going to be taking is supposed to help them in conflict resolution, but really, can a drug help people who are simply damaged goods?  There is a lawyer who is insecure about his partner being a sex worker in the past, then there is a lesbian couple where one of the women is accusing the other’s brother of rape, then there is the couple where the wife believes her husband is cheating with her best friend.  The easy answer for these couples would be to have them separate; they are in unhealthy situations that will only spiral downward and get worse, but instead they think taking drugs that are still in the testing phase equals a good idea.

We get to watch the three stories play out while a board of doctors and government officials debate on what should be done about the drug.  They have cameras installed in the homes of the couples so they can watch from a safe distance. The problem is I just have a hard time believing these couples would act how they do while they know they are being monitored.  From openly having sex, physical abuse, to even murder at one point, it’s hard to believe these couples would act as though they are on the new season of Big Brother on steroids.

Since the film only has a 79-minute running time, it doesn’t give us much time to get to know these couples and care about them.  Rather than spend time and see these characters develop and possibly evolve as the test progresses, we are instead given very generic characters.  Hidden beneath this mess is a good idea; it just simply wasn’t fleshed out enough.  We don’t get to see the characters have follow-up visits about the drugs being injected into them. The daily journals do nothing more than move the story from one scene to the next, and as we see the board members discuss what’s going on, it just gets more frustrating.

Katie Rees Davies directed the film, and to a point she executes the script as it was delivered to her.  The sequences with the board panel does reflect the film’s smaller budget; I mean, when you look at films like 12 Angry Men, you can see what can be done with a single set when you let the performances carry the scene, but these scenes simply fall flat.  As for when we are inside the homes of the couples, each scene starts off with a locked-down shot before shifting to a handheld vibe. These scenes do work better, though I couldn’t help feeling I was watching some reality TV show.

The idea that is presented in the quotes that bookend the film does present a good idea for a film. Unfortunately we really don’t get to see anything about the drugs and their effects.  Honestly, from what the film presents, it’s more of a narrative that would have happened with or without the drugs, and the real lesson here is, if you have proof a partner is cheating or you are made to feel guilty about your past or being raped, maybe this person just isn’t for you.

Brent Lorentson is a horror writer and film critic based out of Tampa, Florida. With a BA in Digital Film, he co-wrote and co-directed Scavenger Hunt. His short stories have appeared in various horror anthologies. In 2019 his short script Fertile Blood will be a part of the anthology horror film Slumber Party. He is currently working on his first novel A Dark and Secret Place set to be released in late 2019. Favorite Films: Taxi Driver, Fight Club, I Saw the Devil, The Wild Bunch, Dawn of the Dead, A Clockwork Orange, Pulp Fiction, Heathers, The Monster Squad, and High Fidelity.
Ocean’s 8 Coming to America (Blu-ray)