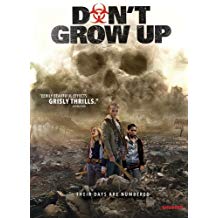 No adults? Well, that must be every kid’s and teenager’s dream. No one to tell them what they can and can’t do, what to wear, or how late to stay out. Then again, I suppose if all the adults were transformed into mindless, violent zombies, that might put a damper on the festivities. I know it did for the group from Don’t Grow Up. For this group of juvenile delinquents, they are the last to know that the world as they know it has changed. One minute they are living it up, and the next they are fighting for their lives. Granted, production value is not of the highest caliber. The film more than makes up for it in an engaging story and not shying away from gore in this post-apocalyptic tale.

A group of kids housed in a youth detention center awake one day to find that they are no longer under adult supervision. In fact, they are the only people in the entire facility. It doesn’t take long for them to find trouble; ransacking the administration office, pilfering booze stashed away in a detention officer’s drawer. Things couldn’t be better until they make that fatal (and I do mean fatal mistake): they leave the detention center. Granted, they had little choice given that they ran out of food, but it is then that they learn the reason for their utopia, and there is no going back.

Adults have been transformed in to violently psychotic zombies that actively hunt minors. After an initial skirmish, the group attempts to retreat with their wounded and find help. It doesn’t take long before they that realize that help is not coming, and they must band together if they hope to survive. Personal issues will be revealed and friendships will be tested as these teens attempt to reach a safe haven.

So on the spectrum of post-apocalyptic/zombie films from best (28 Days Later and Dawn of the Dead) to worst (Zombie Stripper), I would rate Don’t Grow Up on the better side. If I had to assign it a number between 1-10, I would give it between a 7-8 (however, for the purpose of our rating scale here on Upcomingdiscs.com, it is a 3.5). This film made it clear early on that no one, whether it be teenager or child, was safe and did not pull its punches with the savagery that the zombies are capable of. The early introduction to this savagery what sent my wife running from the room, but had me leaning in closer to the screen. It takes a bold type of story to be willing to go to that depth. Additionally, the film addresses several themes such as teenage sex, bullying, and first love.

As I mentioned earlier, no one was safe from meeting their maker. Even people that I was sure would survive, didn’t. As a reviewer that is a breath of fresh air; to be caught completely off guard by a film, especially when you are sure that you have it all figured out. That was the best part of Don’t Grow Up for me. Not to mention, the film featured a character that becomes the hero of the feature, and final couple pairing was another thing that I did not see coming.

If you love zombie/post-apocalyptic films and gore doesn’t make you queasy, check out Don’t Grow Up. Though the production value is not of the highest quality when it comes to night shooting, they put actual effort into the blood and gore. Also, just as a disclaimer, though the title is kid-friendly, this is not suitable movie for kids; not unless you want to deal with their nightmares.

Jeremy Butler is a film school graduate of the International Academy of Design and Technology. He is been writing for Upcomingdiscs since 2012; however, movies have played a big part of his life for much longer. Favorite genres include horror, science fiction/fantasy, and comedy. Favorite movies are V for Vendetta, Boondocks Saints, Kiss Kiss Bang Bang, and The Godfather.
A Quiet Place (UHD Blu-ray) (4K) Mission: Impossible – Rogue Nation (UHD Blu-ray) (4K)