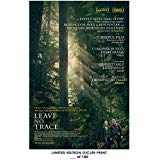 In 2010 there was a little film called Winter’s Bone that came out; it didn’t make a splash at the box office, but it was one of the critical darlings of that year.  For many it was the first time people got to see Jennifer Lawrence on screen, and it’s safe to say it is because of that film she is the star that she is today.  I remember first seeing Winter’s Bone and being so floored by the film I immediately watched it again, and I had to know who it was that had directed the film. Debra Granik was the woman responsible for the film. It was a name I had never heard before, but it was one I’d be on the lookout for in the following years. Though she did a documentary between projects, it seems the wait is finally over as Leave No Trace is about to hit the big screen.

Will (Ben Foster) and Tom (Thomasin Harcourt McKenzie) are father and daughter who are living off the grid in a park on the outskirts of Portland, Oregon.  When we first meet the pair we get a glimpse into their day-to-day life as they forage for food and practice hiding in their environment.  It’s in these opening scenes we get to see the happiness these two share while living in this beautiful, lush, green sanctuary, and we can almost understand why someone would want to choose this lifestyle.  Whenever the pair is in need of supplies they trek back into the city, where Will stops off at the VA  hospital for his check up and receives his medication.  Will turns around and sells his pills to nearby homeless veterans, and with that money he buys groceries and supplies with his daughter.  It may not be a perfect life, but it’s clear that Will and Tom are happy with how things are.

Things take a drastic turn as Will and Tom are found illegally living in the park, and they are both thrown into the social services system.  With the two separated, it’s difficult to not sympathize with their situation. Then when you have the media discussing how immigrant families are being separated at the border, it’s impossible to not appreciate the timeliness of the film.  Though the film doesn’t come out and bluntly say it, it’s clear that Will suffers from PTSD and is simply doing his best to raise his daughter.  He’s a loving dad who is educating his daughter as best he can under the circumstances, and Foster does a remarkable job with this performance.  But the film’s attention is more aimed at Tom, as we see her as a teenager who is struggling with changes in her lifestyle over the course of the film.

The journey we see Tom go on with her father is one that is not difficult to imagine that several other families are experiencing.  Getting to see how Tom seems to blossom as a character makes her one of the more engrossing characters we’ve gotten to see on the screen this year.  From seeing her with her father, going through the social services system to the new home they are relocated to and onwards, we are constantly seeing a character develop and learn to adapt to her surroundings.

When we see Will and Tom get placed into a new home and Will is given a job, we can see that these two are out of their element.  Will understands that to keep his daughter he has to comply with what the people at social services expect of him, but this is clearly the life Will is trying to escape.  As for Tom, this is the point where she meets a young farm boy who introduces her to his 4H group, and she gets a chance to be a part of something more.  While we’re happy for what Tom has managed to find, it’s obvious from the moment of their arrival that this isn’t the home for them.  Granik does such a beautiful job by filming the emotional responses and getting the performances out of her characters that manage to show us, rather than tell us what is going on with them.  I can’t remember the last time I saw a film that so genuinely captured the tenderness of the father and daughter dynamic so well. Will is certainly a character who will frustrate you, but it’s difficult to dislike the man for his genuine love for his daughter and wanting what is best for her.  Then with the performance that Thomasin McKenzie delivers, it is something special.  The final third of this film is simply an emotional one that is handled exceptionally well. From the moment Tom is forced to reach out for help from strangers to the final credits, this is where the film shines its brightest.

We’re in July, and I’ve seen several films this year that I’ve enjoyed quite a bit, but this might be the first film this year that I’d actually call memorable and profound.  Just as Winter’s Bone pulled me in, Granik has done it again with Leave No Trace. In a summer filled with so much brainless action fodder, Leave No Trace is a film that is unfortunately going to slip through the cracks and not be seen by audiences, but hopefully come awards season this film will find an audience.  Though the film may seem simple, its emotional complexity is something that is difficult to put into words.  While I’m not saying this film is a grab-your-tissues tearjerker, this is still an emotional film that definitely tugs at the heartstrings.

Brent Lorentson is a horror writer and film critic based out of Tampa, Florida. With a BA in Digital Film, he co-wrote and co-directed Scavenger Hunt. His short stories have appeared in various horror anthologies. In 2019 his short script Fertile Blood will be a part of the anthology horror film Slumber Party. He is currently working on his first novel A Dark and Secret Place set to be released in late 2019. Favorite Films: Taxi Driver, Fight Club, I Saw the Devil, The Wild Bunch, Dawn of the Dead, A Clockwork Orange, Pulp Fiction, Heathers, The Monster Squad, and High Fidelity.
Sorry to Bother You Skyscraper