Posted in: No Huddle by Jeremy Butler on August 9th, 2018 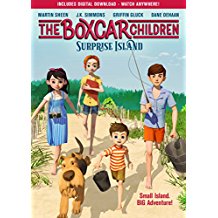 The Boxcar Children: Surprise Island is the second film adaptation of the popular literary series of 1920s. Going into the series I knew very little about it. I wasn’t even aware that there it was a book series until the making of featurette, but we will get to that later. The series focuses on the Alden children, who live with their grandfather following the tragic death of their parent. What these children are most known for his going on adventures and solving mysteries. However, the director said it best, “When the boxcar children solve a mystery, it doesn’t end with someone going to jail, but with someone being emotionally healed.”

In this latest film, the group learns that they will be spending their summer on a private island that their father and their grandfather before him used to spend their summers on. Excited for this new adventure, the group meets a kind stranger who lives on the island. He is very pleasant and always eager to help the children out, but it is very clear that he has a secret, one that affects him very much. It is up to these junior investigators to discover what is and help their new friend.

So, I’m going to be completely honest with you all and admit that this one lost Nalyce’s attention very early on, and it never managed to recapture it. I’m pretty sure it a lot to do with the animation. To my daughter’s credit, the character’s movements did appear slower than normal at times. So obviously, the film did not get the Nalyce seal of approval; however, given that it had a cast that included Martin Sheen, J.K. Simmons, Joey King, and Dane Dehaan, I still wanted to give it a fair shake. The main thing I learn is that I am way out of the target audience for this film, as I struggled to maintain my interest in the plot. I also had a difficult time wrapping my head around the idea of their guardian leaving them on an island with what amounted to be a complete stranger.

On the positive side, I will say that there is a clear message and emotional depth to the story, which I understand is a key component to each book in the series. That was the one part that I enjoyed, that it pulled from a real place. There is also an educational portion, as the film has an archeology subplot. That at the very least made the story relatable. I imagine that fans of the book series won’t be disappointed, as it is my understanding that the film closely follows the book.

So as I said, the film didn’t get the Nalyce stamp of approval, but that isn’t to say that there aren’t some things to enjoy. I have no doubt that fans of the books will enjoy the movie. Also, it is very hard to invest in these characters without seeing the first film, so I would recommend seeing that first. A couple references to the original film would have helped in this regard for newcomers to the franchise. Otherwise, it is like starting a story at the middle of the book. Maybe if I had a chance to show Nalyce the books beforehand, she would feel differently. However, I doubt it. She tends to be very set in her ways. She gets that from her mother.

Jeremy Butler is a film school graduate of the International Academy of Design and Technology. He is been writing for Upcomingdiscs since 2012; however, movies have played a big part of his life for much longer. Favorite genres include horror, science fiction/fantasy, and comedy. Favorite movies are V for Vendetta, Boondocks Saints, Kiss Kiss Bang Bang, and The Godfather.
The Death of Superman: Deluxe Edition (Blu-ray) BlackKKlansman