Posted in: No Huddle by Brent Lorentson on August 30th, 2018 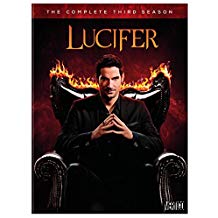 After two seasons it seemed as though Lucifer had finally found its niche, and I was looking forward to seeing what season three would have in store. The story of Lucifer Morningstar (Tom Ellis) as the devil who has been vacationing on Earth is a fitting guilty pleasure of mine.  This isn’t a show aiming to win Emmys; it’s simply a show that wants to indulge its audience for 44 minutes of fun, and week after week, it succeeds in doing just that.  When Season 2 left off, Lucifer was kidnapped and left in the desert, and his wings had been returned to him. This is pretty much right where Season 3 picks up, and as expected, it’s a helluva fun ride.

Lucifer getting his wings back is a pretty big deal, and Season 3 spends a lot of time getting into what this all means and the sacrifice Lucifer made when he first removed his wings. This only further complicates things between Lucifer and his brother, Amenadiel (D.B. Woodside), who is now struggling with finding his purpose considering Lucifer has his wings back, while to Amenadiel’s dismay his wings have not returned.  In episode 11, City of Angels, we get a flashback to when Lucifer first lost his wings.  Personally this is one of my favorite episodes, and it feels like the writers and the cast had a lot of fun with this episode that is all about when Lucifer decided he wanted to stay on Earth.  Everything from Lucifer and Amenadiel crashing a porn set to Amenadiel training to be a “human” fighter (with a sweet little homage to The Karate Kid), I mean, this episode is a fun ride.

But if I have to pick a favorite episode of this season there’s no competition. Episode 7, Off The Record, is a great episode of television. I’m not just saying of the season or how it’s the best episode the show has had (which it is), but this is one of my favorite episodes of television, period.  This is a well done standalone episode about a reporter who is out for revenge against Lucifer after he discovers he is sleeping with his estranged wife, Linda (Rachel Harris).  Granted, we know the relationship between Linda and Lucifer, but seeing how this episode is mainly explored through the eyes of her estranged husband, this is a breath of fresh air I wish the show injected more of.  Don’t get me wrong, though, the third season is still entertaining, but it is hard to outshine this episode.

This season we also have the “will they, won’t they” romance drama between Lucifer and homicide detective Chloe Decker (Lauren German), only there is a wrinkle added when Lt. Pierce (Tom Welling) arrives in their department.  Seeing Pierce and Lucifer butt heads over the course of the season as they both are struggling to win the affections of the detective can get a bit tiresome, and, well, to be honest, Lucifer does seem to lose his edge for a bit, and that’s a shame.  While I’m not against the notion of the Devil falling in love, I do kind of wish the show swayed more to the dark side to somewhat balance this out.   It’s arguable that this season there are numerous characters who would be better suited for the title of Prince of Darkness.  Another character that enters the fray this season is Cain.  Ever since Cain killed his brother Abel, he’s been stuck on Earth as his punishment to remain an immortal, and in his travels he’s managed to find his way to LA.  Cain eventually comes to Lucifer to ask for his help to finally die, and Lucifer is more than happy to oblige, only things are not that simple.

Charlotte Richards (Tricia Helfer) returns, though she’s no longer a vessel for Lucifer’s mom but has returned to find out what has happened to her.  Seeing how all the characters react to her return and their interactions is awkward and fun, but seeing Charlotte and Linda is one of those moments I felt a little cheated, since there should obviously be more bad blood, if not more horror, on Linda’s part. Also this season we get to see a rift work its way between Linda and her BFF and demon-without-a-soul Mazikeen (Lesley-Ann Brandt).  As the show has developed Mazikeen is one of its strongest points. She can do some pretty horrible things, but she’s a character you can definitely sympathize with. The tension that develops between Maze and all the characters is really one of the strongest story arcs of the season, and a lot of it is due to the performance Brandt gives in her vulnerable moments.

When I first heard that Fox was going to be cancelling Lucifer, I was bummed, and apparently so was the rabid fan base of the series.  Thankfully it seems Netflix has swooped in to save the series, and we will be getting a Season 4.  Honestly, this is the shift I believe the series needed.  Though I really enjoy the show, when you have 26 episodes in a season, you are going to have a lot of storyline fat that can be trimmed.  A leaner and meaner season of Lucifer is what I have my fingers crossed for.  Give us a little more sex and violence and really dig into the playground of what having the devil coming to play on Earth can possibly be like.  As I said, this show is a guilty pleasure, and it does have its moments of being exceptional, but it never can quite grasp that full potential.  I want this show to go on and continue to improve; in 2019 it looks like we’ll get to see how it all turns out.

Brent Lorentson is a horror writer and film critic based out of Tampa, Florida. With a BA in Digital Film, he co-wrote and co-directed Scavenger Hunt. His short stories have appeared in various horror anthologies. In 2019 his short script Fertile Blood will be a part of the anthology horror film Slumber Party. He is currently working on his first novel A Dark and Secret Place set to be released in late 2019. Favorite Films: Taxi Driver, Fight Club, I Saw the Devil, The Wild Bunch, Dawn of the Dead, A Clockwork Orange, Pulp Fiction, Heathers, The Monster Squad, and High Fidelity.
The Flash: The Complete Fourth Season (Blu-ray) Masters of Sex: The Complete Series (Blu-ray)