Posted in: Podcasts by Gino Sassani on September 4th, 2018 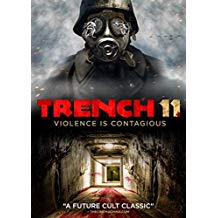 This coming Veterans Day will also mark the 100th anniversary of the end of World War I. I’m sure there will be plenty of events to mark the event. WWI is also the subject of the latest horror film out by RLJE Films called Trench 11. It appears those Germans have been developing a bio-weapon deep underground and all is not quiet on the Western front. An elite group of soldiers are sent to unlock the secret and what they find is… That would be telling. I got the story directly from the film’s director and co-writer Leo Scherman. Now you can eavesdrop on our chat. Just bang it here and listen to my conversation with Leo Scherman.

Gino Sassani is a member of the Southeastern Film Critic's Association (SEFCA). He is a film and television critic based in Tampa, Florida. He's also the Senior Editor here at Upcomingdiscs. Gino started reviewing films in the early 1990's as a segment of his local television show Focus. He's an award-winning recording artist for Omega Records. Gino is currently working on his 8th album Merchants & Mercenaries. Gino took over Upcomingdiscs Dec 1, 2008. He works out of a home theater he calls The Reel World. Favorite films: The Godfather, The Godfather Part II, The Body Snatcher (Val Lewton film with Karloff and Lugosi, not the pod people film), Unforgiven, Gladiator, The Lion King, Jaws, Son Of Frankenstein, The Good, The Bad And The Ugly, and Monsters, Inc.
Jack Ryan 5-Film Collection (UHD Blu-ray) (4K) Tuesday Round Up: September 4, 2018