Posted in: No Huddle Reviews by Gino Sassani on September 12th, 2018 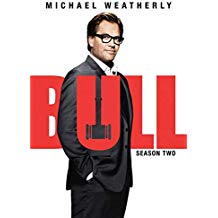 When Michael Weatherly left NCIS it was like losing an old friend, both for the cast and crew of the franchise and for the millions of fans who had invited him into their living rooms for almost 15 years. But he returned to both. His presence was very much alive in the last season of NCIS. He was discussed, shown in flashbacks, and somehow continued to carry on his teasing war with McGee. But he wouldn’t return in person. That’s because he was busy with the second season of his own show Bull. And while Bull is reportedly based on the early career of Dr. Phil, nothing could be farther from the reality that Bull is 100% Michael Weatherly. I’m not sure if the shows exist in the same television universe, but they continue to be somewhat entangled. Both shows aired an episode with the exact same title on the exact same day. The shows were called Keep Your Friends Close, and there’s obviously a message to the fans in there that however successful Bull turns out to be, we’re not completely done with Tony, and there’s an effort to keep the family bonds close.

There were no cast changes going into the second season, but there will be going into the next. The show did a good second-year job of showing some evolution of these characters from one year to the next, and we learn more about them in this release than we did in the first. Bull (Weatherly) himself is looking a little more human and fragile. Events of the season will take a bit of a toll, and he begins to inch toward some self-destructive behavior. It’s very nice to see some flaws in the cocky armor, something blatantly missing in the first year. Benny (Rodriguez) was the courtroom lawyer about half the time in Season 1. This year he rarely takes a back seat, and the trust between the two characters is a great improvement. Marissa (Carr) has quite an emotional year that sees her questioning if she should stay. She falls for a guy who turns out to be a con man, and the damage is quite dramatic. She certainly gets the most emotional growth this season. Chunk (Jackson) is no longer just the gay fashion consultant on the show dressing witnesses for the stand. He ends up going to law school, where he encounters a professor who has quite the chip on his shoulder for what the firm does. Cable lets her own emotions get in the way of her judgment and makes a big mistake that puts the entire firm in jeopardy. Annabelle Attanasio is the daughter of the show’s producer Paul Attanasio, and she’ll be leaving the series after this release. Danny (Kirchner) has her own loyalties tested this season.

The season also introduces us to quite a few people from Bull’s past. When a self-possessed actress comes to him for help about a foreign adoption, she sues Bull when things don’t work out. The actress hires an ex-lover of Bull’s to defend her. Another ex-lover shows up when her lawyer son comes to Bull for help. A local company has tainted a small town’s water supply, and the residents are getting deadly cancers, including Bull’s ex. He rides to the rescue. His old college roommate is now a drinker and professional gambler who gets kicked out of a casino and then is charged with the murder of the security head he clashed with. Of course, he comes to Bull for help. He’s certainly lived a colorful youth, and many of those blanks get filled in this season.

At its heart, Bull is still a courtroom drama, and last season often got too formulaic and predictable. This year the show has a new showrunner, and the emphasis has been moved to the actual court procedures. Yes, the mirror jury and the jury selection are still the shtick that separates this show, but it’s been moved a bit more to the background. In fact, several episodes this season put the team in a situation where they can’t use their usual mirror jury tactics. It’s going to be necessary to do more of this to keep the gimmick from getting too stale. The mirror jury element is the least likable part of the series. It creates incredible continuity issues. I can’t count the number of times Marissa is standing in front of the red/green monitors to tell Bull how the jury is leaning when her dialog does not match the screens we see. They don’t match at least as often as they do. It also looks like a thankless job for the actress to do those scenes. I absolutely want to see this show become more about the legal issues and trial strategy that goes beyond jury selection, and that’s exactly the path the show is taking.

The final two episodes are the rare multi-part stories where Bull is trying to keep a client off death row. It pushes him to that bottom he’s been circling all season. There’s a bit of a cliffhanger that will get Season 3 off to a running start. You get all 22 episodes on six discs and a few extras that include the traditional CBS season wrap-up, a gag reel, and 20 Questions with Michael Weatherly. It all gets you ready for the upcoming Season 3 premiere. “To be continued.”

Gino Sassani is a member of the Southeastern Film Critic's Association (SEFCA). He is a film and television critic based in Tampa, Florida. He's also the Senior Editor here at Upcomingdiscs. Gino started reviewing films in the early 1990's as a segment of his local television show Focus. He's an award-winning recording artist for Omega Records. Gino is currently working on his 8th album Merchants & Mercenaries. Gino took over Upcomingdiscs Dec 1, 2008. He works out of a home theater he calls The Reel World. Favorite films: The Godfather, The Godfather Part II, The Body Snatcher (Val Lewton film with Karloff and Lugosi, not the pod people film), Unforgiven, Gladiator, The Lion King, Jaws, Son Of Frankenstein, The Good, The Bad And The Ugly, and Monsters, Inc.
Silicon Valley: The Complete Fifth Season Modern Family: Season 9