Posted in: No Huddle by Brent Lorentson on December 28th, 2018 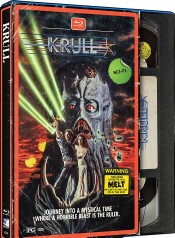 In 1983 when Krull first came out it was riding the wave of sci-fi and sword-and-sorcery films that were attempting to cash in following the success of Star Wars.  I didn’t see this in theaters, but I did eventually see it once it was on VHS.  My memories of the film were vague at best, but what I never could forget was the “glaive” weapon that you see displayed on the cover art.  For many, though, I can understand if you are just now hearing about Krull for the first time considering the film’s age and its lack of commercial success.  While Krull isn’t a great movie, it’s still a silly (unintentionally) yet fun movie that was directed by Peter Yates.  In case you need a little reminder, Yates is responsible for a little-known film some may have heard of called Bullitt.  So, after three decades, how does the film hold up?  Well, saddle up; I’m about to tell you.

In the opening moments we get an opening shot in space, and we are watching a massive ship pass across the screen (no, this is not Star Wars). Not to be too judgmental so early on, but it does bother me that the spaceship looks like a giant log in space.  The ship lands on the planet on Krull. It’s here where Prince Colwyn (Ken Marshall) is marrying Princess Lyssa (Lysette Anthony).  As luck would have it, the wedding is crashed by The Slayers, a violent futuristic race that decides to kidnap the Princess and kill Colwyn’s father-in-law, the King of planet Krull.  With no other options, Colwyn gathers up a group of men to assist him on his journey into The Black Forest to kill off The Slayers along with their leader and hopefully rescue the princess in the end.  I wouldn’t call this an original concept by any stretch, but it’s a fun way to kick off this campy adventure film.

Perhaps the most enjoyable bit of this film is seeing Liam Neeson playing Keegan, one of the members of Colwyn’s group.  We really don’t get enough of this likeable ladies’ man with numerous wives, but even back in ‘83 we can see Neeson’s charm coming through, though I doubt anyone could have expected the star he would become.

There are many portions of this film that we’ve seen before, and for some it’ll be hard to not think about The Lord of the Rings while watching this, but what is amazing about this film are how well the sets and some of the effects hold up over time.  Considering the stage design was done at Pinewood studios (where the James Bond films are mostly shot) it’s no surprise to see how large and ornate many of the sets are.  One of my favorite moments, though, is when a character must face the Widow of the Web. Sure, the effects may not be up to the standards we are used to today, but the white spider that we see in this sequence is creepy as hell. Really, over the course of Colwyn’s journey every location is one beautifully constructed set after the other, and it does help immerse you into this world as compared to the films of today that rely so heavily on CGI, and as a member of an audience we know a majority of the sets are green screens in real life.

Sadly, though, great sets do not equal a great movie.  The plot is rather generic and straightforward, and the dialog dangles between cheesy and cringe-worthy.  As for the finale when we see Colwyn go up against the big bad, this is about as anticlimactic as it gets, and how we see members of his group whittled down by The Slayers in this final act just seems rushed and meaningless.  Don’t even get me started on the Cyclops.

At the end of the day, though, Krull is nothing more than a cheesy sword-and-sorcery romp that goes on for two hours.  It’s fun, but I still will watch Beastmaster ,and of course the Conan films, first.  But if you’re a fan of the genre, this is definitely one that belongs in your collection if for no better reason than they simply don’t make these kinds of films like they used to.

Brent Lorentson is a horror writer and film critic based out of Tampa, Florida. With a BA in Digital Film, he co-wrote and co-directed Scavenger Hunt. His short stories have appeared in various horror anthologies. In 2019 his short script Fertile Blood will be a part of the anthology horror film Slumber Party. He is currently working on his first novel A Dark and Secret Place set to be released in late 2019. Favorite Films: Taxi Driver, Fight Club, I Saw the Devil, The Wild Bunch, Dawn of the Dead, A Clockwork Orange, Pulp Fiction, Heathers, The Monster Squad, and High Fidelity.
12 Days Of Christmas Giveaways: Day 3 – River Runs Red on UHD-Blu-ray (4K) From Cinedigm On the Basis of Sex