Pick Of The Litter 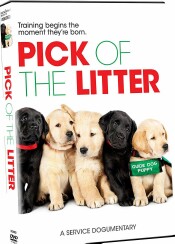 Pick of the Litter indeed. I never quite understood that phrase until I saw this documentary which follows the 18-month training period from the birth of a service dog to their placement with blind people to act as guides. I also didn’t realize how extensive a process that it was to train a guide dog, but when you think about it that makes sense given the importance these animals will play as people’s eyes. According to statistics, out of 800 dogs born to be service dogs, only 300 make it through the training process. So that means that 500 dogs don’t become guides. That’s surreal, but after watching the documentary, and seeing how in-depth the training is and the importance for the dogs to have the right temperament; I am glad to see how seriously the trainers take this task.

During the 18-month period, we meet five pups; Patriot, Poppet, Phil, Potomac, and Primrose. From the moment they are born they are trained to become guide dogs for the blind. The importance of this job is perfectly illustrated in the opening sequence where several people recount instances where guide dogs saved their lives, whether it be preventing the person from walking into traffic or stopping them from tumbling down a dark stairway. This illuminated the dangers that blind people face every day; in both instances, the people state that they attempted to make the guide move, and the animal refused as it sensed the potential danger to the person. That is an incredible and vital instinct that trainers emphasize that every animal must possess.

In addition, we are brought into the lives of the people who raise and care for the animals during the training period. They are all dedicated individuals, and it is clear that a bond is quickly formed between the raiser and animal, which only adds to the heartbreak, as at any given moment the dog can be taken away from the raiser to be placed with another raiser or career-changed (the term used to describe a animal that has been cut from the program). With every animal there are certain behavioral issues, whether it be aggressiveness or being easily distracted, both things that have to be curtailed, as a guide must be alert at all times and never aggressive. It is heart-wrenching to watch when the raisers is forced to give up the dog or return it so that it can complete its training. I know that I wouldn’t be able to do it; after caring for the animal for a year, it would be impossible for me to give it back. I know that the animal is for a worthy cause, but it takes a special kind of person to do this job.

During the film, my family and I wagered on which dogs would make it through the program. I’m proud to say that I was right about at least one of my guesses as well as one that I was sure wasn’t going to make it all the way through. It is unfortunate when an animal is career-changed, but on a positive note, the animals are always placed with loving families to serve as pets. My wife and daughter just kept asking where can we sign up to receive a dog that has been career-changed.

This was a great subject matter, and I remained invested the entire time; it is a refreshing topic that deserves more awareness. I wholeheartedly recommend seeing this film, but I do warn you that you better be prepared to fall in love with these animals.

Jeremy Butler is a film school graduate of the International Academy of Design and Technology. He is been writing for Upcomingdiscs since 2012; however, movies have played a big part of his life for much longer. Favorite genres include horror, science fiction/fantasy, and comedy. Favorite movies are V for Vendetta, Boondocks Saints, Kiss Kiss Bang Bang, and The Godfather.
Schindler’s List: 25th Anniversary Edition (UHD Blu-ray) (4K) Tuesday Round Up: January 15, 2019