Posted in: No Huddle by Brent Lorentson on January 21st, 2019 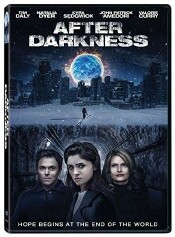 Any time you make a low-budget film that for a majority of the film takes place in a single location, it can be a bit of a risk.  Factor in shooting a film on a small budget, small cast, then you have to hope that the idea can hook an audience, and it’s a script that will keep an audience hooked for the duration of the film.  The problem After Darkness has from the get-go is it doesn’t have the budget to match its ambition, nor does it have the script to help the actors carry the burden of this film.  Even with Kyra Sedgwick and Natalia Dyer (Stranger Things), this film was a struggle to get through. For those brave souls who want to know more, it’s time to hunker down, ‘cause this one was a doozy.

Here’s the deal. The sun is about to black out, which of course would mean a catastrophic event not just for a few people, but enough to effect a good portion of the galaxy.  Whether the blackout is for a few hours or for eternity is not known for sure, but basically the world is on high alert and is in full doomsday prep mode. This brings us to the Beaty family, who seem to have a plan for survival. Raymond (Tim Daly) is the patriarch of the family who seems to be politically connected and has worked out a deal where he and his family will seek shelter in a cave system that has been set up by the government to ensure humanity’s survival. All Raymond and his family have to do is wait things out a bit till they can be picked up and taken to safety.

Really the setup is all the film has going for it, and it seems like most of these characters don’t understand what is going on in the world.  The family is coming together knowing there is a disaster looming, but rather that there being doom and gloom attitudes, most of them are acting like they are coming together for Thanksgiving dinner.  There’s no tension, no suspense to what is coming, I mean, these people are making comments about cutting some wood for their fireplace. Seriousl,y has no one in this family seen a Roland Emmerich disaster film?  Adding to the family drama, one of Raymond’s sons has decided to bring his girlfriend, and to make matters worse, she’s pregnant.  This is simply insane to me, because this adorable couple has managed to keep the pregnancy from the family for so long, but even better, these knuckleheads didn’t think to get supplies to raise a kid during the end of the world.  But that’s OK; there is a pantry sort of filled with supplies for the family to survive before help arrives except….rats have gotten into the food. But really, there is no need to panic since help is on the way.

At this point of the film I really didn’t care whether the family survived the cold or not. Their decision making is so absurd it’s difficult to root for their survival.  Tim Daly does what he can  to give urgency to the family’s position, but the filmmakers seem to make him out to be a bad guy for simply losing his patience with his family who don’t seem to appreciate the magnitude of the crisis going on.

As for the look and feel of the film, it’s about as bland as a late-night infomercial.  There is nothing that even resembles atmosphere in this film. If this were a found-footage film, it would have at least had more style and substance; it’s as though even the camera guy fell asleep pressing record.  Simply put, this is lazy filmmaking, and it’s a shame to see when there are actually talented performers involved with this.  It was a chore to sit through this, and hopefully you’ll be lucky enough to pass on this film as well.  Perhaps you’re hoping that this is one of those titles that are so bad that it’s good. Unfortunately, this is just bad.

Brent Lorentson is a horror writer and film critic based out of Tampa, Florida. With a BA in Digital Film, he co-wrote and co-directed Scavenger Hunt. His short stories have appeared in various horror anthologies. In 2019 his short script Fertile Blood will be a part of the anthology horror film Slumber Party. He is currently working on his first novel A Dark and Secret Place set to be released in late 2019. Favorite Films: Taxi Driver, Fight Club, I Saw the Devil, The Wild Bunch, Dawn of the Dead, A Clockwork Orange, Pulp Fiction, Heathers, The Monster Squad, and High Fidelity.
Glass Tuesday Round Up: January 22, 2019