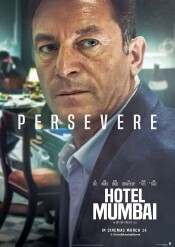 “Welcome to The Taj. Home to statesmen and celebrities for over a century.”

There are times when movies come almost uncomfortably close to real life experiences. This can be both a blessing and a curse. I’ve heard World War II vets have mixed feelings after watching Steven Spielberg’s relentless portrayal of the D-Day storming of the beaches of Normandy. Many cried because it brought them back to a place that lives vividly in their own minds. Some were resentful for the pain they experienced. As an audience member who has never experienced anything close to battle, it was compelling and also fatiguing. It seems like director Anthony Maras took a page from Spielberg’s book and made it into an entire movie. This time it cuts closer to home for a generation that was significantly changed by the terrorist attacks of 9/11. We live with those images, and it has changed the way we conduct our daily lives from flying in a plane to obtaining identification credentials that used to be matter of course. It doesn’t help that these attacks, albeit on a much smaller scale, continue to happen throughout the world by an extremist sector of an otherwise peaceful religion. What might be worse than the fear is that we might be getting somewhat numb to these events. At least that’s what I thought before I saw Hotel Mumbai and I realized there were still plenty of nerves to be rattled on the subject of terrorist attacks. If you’re concerned that you might have become desensitized to the subject, just one viewing of Hotel Mumbai will answer that question in a resounding way.

The worry about becoming numb to attacks begins with the embarrassing revelation that I didn’t really pay too much attention to the attack on the Taj Hotel in Mumbai, India in November of 2008. It’s more of a function of often confusing the facts and details of one attack with those of another. I don’t know if I should thank Maras for educating me on this particular attack or hate him for making me witness such an event with such grisly detail. And while the characters here are largely fictional, the experience was uncomfortable and exhausting.

The film begins as we observe 10 Pakistani members of the Lashkar-e-Taiba approaching India’s largest city in a Zodiac watercraft. They are listening to “inspiring” words from their leader in their headsets. They appear calm and businesslike as they land their boat and begin their systematic dispersion throughout the city for a series of coordinated bombing attacks, the climax of which will be the populated and popular Taj Motel. For a brief few minutes, Maras allows us to meet some of the important players in the massacre to come. He’s allowing us the time to get to know some of these players as emotional humans. The first of these is Arjun, played by Dev Patel. He’s a worker in the hotel’s kitchen, where he is already late because of his concern for his wife and child whom he does not want to leave. Once there he is admonished for not having the proper footwear and almost sent home if not for the empathy of an otherwise drill-sergeant boss. But his character and heroism becomes a huge part of the movie. They are preparing for a VIP, so he lends Arjun his shoes, which are obviously too small and cause the young worker pain. But he can’t afford to miss hours and suffers in silence. Then it’s time to meet the VIPs, a rich American couple who have been here before, so much so that the hotel staff are already familiar with their desires up to the temperature in the woman’s bath water. The group includes famous architect David, played by Armie Hammer, his wife Zahra Nazanin Boniadi, their child and babysitter, Sally (Cobham-Hervey). The hotel’s guests also include the enigmatic Vasili, played by Jason Isaacs.

The stage is barely set when the attacks begin throughout the city. But we don’t even have time to deal with those. The hotel is swiftly under a brutal attack. Machine gun fire takes out scores of guests and workers, and their bodies are soon strewn all over the hotel’s landscape. Eventually the people inside the building are either dead, taken hostage, or in hiding from the terrorists. David and Sally are soon separated, as is Sally from her baby and the sitter. But Maras doesn’t stop there. He lingers on the aftermath. We’re forced to look at the littered bodies for long moments at a time as the terrorists continue to search for survivors and rig the building to explode. Now the film becomes somewhat of an intimate affair as we follow these few survivors and watch them make both good and bad decisions. This part of the film reminded me of the various groups in The Poseidon Adventure who can’t decide which end of the ship to go to. There’s disagreement and in-fighting that doesn’t really help anyone’s chances to survive.

This is when the film makes one of its more compelling points. A group of staff are moving toward a particular place in the hotel that appears to offer them a chance to get out. Of course, the press get this info and broadcast it to the world, including the terrorists who are watching on their cell phones. It might just be the most enlightening moment in the film amid all of this bloodshed and struggle to survive. The ability to both deliver and ultimately consume news in real time is a double-edged sword, and what news editor doesn’t figure the bad guys have phones?

The director is in danger of wearing the audience completely out. The saving grace is how effectively he allows just a handful of characters get under our skin enough to really care what happens to them. This is a story of a massive and deadly attack, but it’s these micro moments that allow the macro work to be at all bearable. Otherwise this is the storming of Normandy for two straight hours, and I’m not sure I could have lasted through something like that. Even with these smaller stories, Maras never really lets up, and you can’t walk out of this film with a lot of emotional energy remaining. It’s not for everyone.

I said it at the beginning. Maras’s style and skill is both a blessing and a curse. He puts together a horrific narrative with skill and an immersive style. It’s truly compelling. But he’s often so skillful. Too often so immersive that it can be somewhat traumatic. Certainly there’s a lesson or two to learn here, and there’s no chance of those lessons not getting through. But the cost might be too high for some. It’s not for everyone, and it’s an experience you won’t soon forget. If you can’t take it? “There’s no shame in leaving.”

Gino Sassani is a member of the Southeastern Film Critic's Association (SEFCA). He is a film and television critic based in Tampa, Florida. He's also the Senior Editor here at Upcomingdiscs. Gino started reviewing films in the early 1990's as a segment of his local television show Focus. He's an award-winning recording artist for Omega Records. Gino is currently working on his 8th album Merchants & Mercenaries. Gino took over Upcomingdiscs Dec 1, 2008. He works out of a home theater he calls The Reel World. Favorite films: The Godfather, The Godfather Part II, The Body Snatcher (Val Lewton film with Karloff and Lugosi, not the pod people film), Unforgiven, Gladiator, The Lion King, Jaws, Son Of Frankenstein, The Good, The Bad And The Ugly, and Monsters, Inc.
Dumbo (2019) Tuesday Release Round-Up For Tuesday April 2nd, 2019