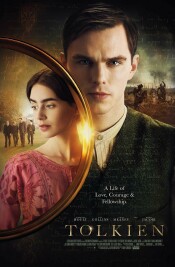 One of the first people in my life to tell me a story was J.R.R. Tolkien. I was given a colorfully illustrated copy of The Hobbit that I still have to this very day. Sure, it was abridged and was mostly filled with pictures, but I was likely five years old when I got the book. The fact that I’ve kept it this long should tell you something about the kind of story Tolkien told me. Since that time I’ve read the Fellowship Of The Ring trilogy at least three times. I’ve written music inspired by those stories. And then there are the six massive films from Peter Jackson. In all these years I’ve never quite shaken the words of a man I never did have the opportunity to meet… that is, until now. Watching the biographic drama Tolkien leaves me with a sense of connection that I always wished I might obtain to the man himself. It’s still rather early in the film season, and while this might not quite be the season for such things just yet, I must say I’ve at least seen the best film of 2019 to date.

World War I had a tremendous affect on J.R.R. Tolkien (Hoult), and so it seems somewhat appropriate that the film begins with the man huddled in the trenches at the battle of Somme in France looking for a lost comrade and friend. We leave that quest unfulfilled as we are catapulted to the man’s early years. The film makes somewhat of a whirlwind of his younger days spent with his brother and parents. It’s a whirlwind because those days were brief for the future author. He lost his father and mother both while still a young and rather penniless lad. He and his brother fall under the wing of their uncle, Father Francis, a Roman Catholic priest who takes the raising of the lads to heart. He provides Tolkien with a solid education, which leads him to Oxford and the company of three friends who would help to build the man he would eventually become. The four are artists of different ilk and form a society dedicated to intellectual conversation, creative inspiration, and the taking of chances in life. His friends would not be the only influence on his life. At his boarding school he quickly falls under the spell of a young piano student staying at the house named Edith Bratt (Collins). Their courtship is distracting to the point it nearly gets Tolkien dismissed from Oxford because of falling grades, causing Father Francis to forbid their relationship until after his education. But Tolkien still has to deal with failing school. He solves it by convincing an elder language teacher of his brilliance in the art of not only learning languages but creating them, a skill that would come in quite handy in the realms of Middle Earth.

“You shouldn’t take six hours to tell a story about a magic ring.”

All the while that we watch Tolkien grow and , the story intercuts with his obsessive push to find his friend Geoffrey (Boyle) with whom he has lost contact and fears the worst. He’s wracked with fever and kept going through the help of a faithful subordinate named Sam (Roberts). I think you have some idea where that story is going. All the while he copes with his fever and the raging war by visions of grander creatures and events. He sees dragons where German soldiers work their flamethrowers, and he envisions horribly deformed man-like creatures performing the horrible acts of war about him. The experience leaves him somewhat broken but with a head filled with these images and the concepts of fellowship and the ideal of a noble quest. The stories are littered with these experiences from war that might account for some of the visceral imagery that makes the books so compelling.

Certainly there are aspects of the man’s life that aren’t explored here. Tolkien was also influenced by his devout Christian upbringing that is also quite undisguised within these stories, but we really get little of that beyond the influence of Father Frances, who is played delightfully by Star Trek: The Next Generation and Deep Space Nine engineer Colm Meaney. The film is simply brimming to overflowing with emotional performances that make this more complete than merely the tale of just one man. I was able to get to know Edith through a powerful performance by Lily Collins. His friends who gathered at Barrow’s Tea Room formed the Tea Club Barrovian Society (TCBS) and pledged a brotherhood loyalty which is brought to life quite emotionally with the performances of Ty Tennant, Albie Marber, and Adam Bergman. The chemistry between the four is inspiring. Of course, I can’t credit enough Nicholas Hoult, who plays the film’s guest of honor, Tolkien himself. He doesn’t overplay the big moments. Director Dome Karukoski allows us to discover these gems without drawing undue attention to them. It’s a simple illustration or a sentence with no more focus than any other that puts these gems in your hand. The filmmakers trust the audience to be looking for the connections and allows us the joy of feeling like we discovered them, and they weren’t merely handed to us. I love a film that trusts us to get it. And that’s where the movie is at its best. It’s a treasure hunt, and Karukoski merely provides the map. All you need do is to allow it to play out and keep your eyes open. Hey, “What’s the worst that could happen?”

Gino Sassani is a member of the Southeastern Film Critic's Association (SEFCA). He is a film and television critic based in Tampa, Florida. He's also the Senior Editor here at Upcomingdiscs. Gino started reviewing films in the early 1990's as a segment of his local television show Focus. He's an award-winning recording artist for Omega Records. Gino is currently working on his 8th album Merchants & Mercenaries. Gino took over Upcomingdiscs Dec 1, 2008. He works out of a home theater he calls The Reel World. Favorite films: The Godfather, The Godfather Part II, The Body Snatcher (Val Lewton film with Karloff and Lugosi, not the pod people film), Unforgiven, Gladiator, The Lion King, Jaws, Son Of Frankenstein, The Good, The Bad And The Ugly, and Monsters, Inc.
Pokemon Detective Pikachu Princess Mononoke Collector’s Edition (Blu-Ray)