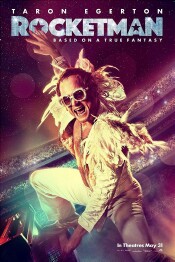 “My name is Elton Hercules John.”

When I was a kid he was Captain Fantastic, and I spent a lot of time and money on Elton John records since the early 1970’s. I was a 12-year old kid when Goodbye Yellow Brick Road came out, and I’ve been a pretty huge fan ever since. I’m a veteran of about 50 concerts over the years, and I was looking forward to this movie in the same way I used to anticipate a new Elton record for decades. Most of the time I was rewarded with brand new songs that would quickly become part of my own story growing up. Once in a while I was disappointed. I hated Victim Of Love so badly that I threw the record across the room, and there is still a stain of peach paint on my copy. I wish that I could say that the film Rocketman was more like those wonderful vinyl treasure chests, but it was more like the latter, and no one is more frustrated than I am. I wanted terribly to love this film. Unfortunately, it was a bit of a middle finger to Elton’s fans, and I think it’s going to be a long, long time before I get over it.

Like many of you, I suspect, I was expecting this to be 2019’s Bohemian Rhapsody. And why not? It was directed by Dexter Fletcher, who rescued that project by stepping into the director’s chair when Bryan Singer was fired. I was looking forward to that same wonderful style of rock ‘n’ roll historical piece wrapped in a compelling drama. But it turns out this was never intended to be that kind of a story. I watched Elton John himself explain that this was going to tell the true story. And while it’s true that the film didn’t shy away from some rather low moments in the man’s life, there is very little about this film that’s true. The style isn’t even one that lends itself to a biography. It’s much more a fantasy that would serve better on a Broadway stage than the local box office theater. I suspect that’s where the material is headed and that it will find more success there than it’s going to find in the local multiplex. It’s going to get stomped by Godzilla, and deservedly so.

The story is told from the perspective of Elton in a group therapy meeting during his 1989 stint in rehab. He’s telling the others gathered about his loveless childhood and of his rapid rise to stardom that brought with it just about every kind of addiction there is. Those early years are told often with characters breaking out in song from one of Elton’s hits like I Want Love. While not what I expected, I was still on board the train until the lies started pouring in. When Elton meets Bernie, he’s already provided lyrics to songs like Daniel that didn’t come until years later. He’s auditioning for Dick James (Graham) with songs like I Guess That’s Why They Call It The Blues, which wouldn’t be written for decades. It’s as if Fletcher and Elton didn’t trust the audience to know the titles of the more obscure stuff that started the thing rolling. The more unforgivable sin came when the film depicts Elton’s triumphant show at the Troubadour, where he fell under the notice of the influential critics and promoters like John Reid (Madden). The success is attributed to a rousing performance of Crocodile Rock, which also didn’t come along until years later. The band is portrayed as one with an unnamed guitarist, but that first set of shoes was just Elton on piano, Nigel Olsson on drums, and the late Dee Murray on bass. There was no guitarist, and there was no Crocodile Rock. It’s an unnecessary lie. Perhaps the point was that Elton is an unreliable narrator, and I get a bit of that. But this film is aimed clearly at the masses with little regard for the fans. An even more unforgivable sin is that these important band members never even get a mention in the film at all. Elton’s pretty much saying, “I did this by myself”, and it’s terribly insincere.

That’s not to say there aren’t some wonderfully emotional moments. The film does a rather nice job of showing the relationship between Elton and lyricist Bernie Taupin (Bell), and I thought that the heart of that relationship really came through. There’s another moment where he’s writing the music to Your Song and Taupin is watching from a doorway amazed at what he was hearing. These are incredible moments, and I wish the film was more like that throughout. I’d love to hear what Davey, Nigel, and other musicians thought of the film. There’s also a generous amount of Elton music which will likely distract many people enough to enjoy the film. Taron Egerton is much better than I suspected he would be, and the performances are certainly a highlight of the film.

One of the knocks on Bohemian Rhapsody was that some thought the film glossed over Mercury’s homosexuality. I thought the point was very clearly made. Fletcher must have decided he didn’t want to hear that about Rocketman, and the film’s a bit too graphic and sidelined by John’s relationship with manager and lover John Reid. It’s an overreaction to something that wasn’t really missing in the Mercury film. I doubt that there’s anyone who knows who Elton John is who doesn’t know about his sexual nature. And they didn’t even get that right. It is much later in the film when Elton comes out to his mother, when the truth was out thanks to a Rolling Stone interview in the early 70’s where Elton made the admission with the famous line that he drew the line at farm animals. It certainly never damaged his career. We call bought the records anyway. I don’t care who he’s sleeping with as long as I like the music. And even here the film neglects the positive side of his orientation. It’s only in a postscript that it’s mentioned that Elton’s raised a half a billion dollars for AIDS research through his foundation. That’s the kind of thing that completes the story, not a graphic romp in the sack.

I still have a tremendous respect for Elton as a musician. I’ll keep buying the music, but I don’t think I’m going to trust him on film again. Instead I’ll rerun those 3-foot boots in Tommy and play the music over and over again. That will cheer me up, because honestly, “This boy’s too young to be singing the blues.”

Gino Sassani is a member of the Southeastern Film Critic's Association (SEFCA). He is a film and television critic based in Tampa, Florida. He's also the Senior Editor here at Upcomingdiscs. Gino started reviewing films in the early 1990's as a segment of his local television show Focus. He's an award-winning recording artist for Omega Records. Gino is currently working on his 8th album Merchants & Mercenaries. Gino took over Upcomingdiscs Dec 1, 2008. He works out of a home theater he calls The Reel World. Favorite films: The Godfather, The Godfather Part II, The Body Snatcher (Val Lewton film with Karloff and Lugosi, not the pod people film), Unforgiven, Gladiator, The Lion King, Jaws, Son Of Frankenstein, The Good, The Bad And The Ugly, and Monsters, Inc.
Godzilla King of the Monsters 13 Hours: The Secret Soldiers of Benghazi (UHD Blu-ray) (4K)