Posted in: No Huddle Reviews by Archive Authors on July 10th, 2019 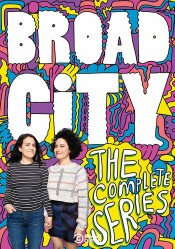 Stop me if you’ve heard this one before: single gal(s) looking for love — among other things — in the big city. On television, the trope dates back to the days of Laverne & Shirley and continues with more contemporary entries like Sex and the City and Girls. It’s an effective, well-worn story hook that has now gotten a funny, tremendously weird spin thanks to Comedy Central’s Broad City. Broad City began life as a web series.  Now CBS has brought together all five seasons of the series and put it in one big release. You get 11 discs. Each season has 10 episodes spread out on two discs. You also get an extra disc with all new bonus features that give you an added reason to pick this collection up.

Abbi and Ilana do interact with a recurring cast of characters that includes Lincoln (Hannibal Buress), Ilana’s nurturing, supportive sex buddy; Bevers (John Gemberling), Abbi’s roommate’s slovenly boyfriend, who spends way too much time at her place (the joke is we never actually see Abbi’s roommate); Jaime (Arturo Castro), Ilana’s sensitive, drug-dealing gay roommate; and Jeremy (Stephen Schneider), the nice guy neighbor Abbi has a massive crush on. These characters mostly float in and out of Abbi’s and Ilana’s life, with the exception of Ep.7/“Hurricane Wanda”, which has all of them — plus a temperamental sibling — holed up in Abbi’s apartment during a storm. It’s an extended showcase for the supporting cast, while also featuring the hallmarks of any Broad City episode: sharply-observed humor involving sex and drugs, Ilana going to insane lengths to help Abbi, and clever sight gags. Oh yeah: there’s also an extended sequence involving a turd. (Would you believe me if I told you it’s not even the most disgusting gag involving a toilet? That dishonor goes to the Season 1 finale, “The Last Supper.”)

Toilet humor aside, Broad City scores major points (and major laughs) because of the specificity and authenticity it brings to the “single gal in the city” TV pantheon. Unlike the 2 Broke Girls on CBS’s sitcom, Abbi and Ilana legitimately seem like two broke girls who don’t know where their next payday is coming from. The first episode/“What a Wonderful World” sees them engaging in a scheme involving stolen office supplies and street drumming, all so they can afford to go to a secret Lil Wayne concert. The fact that neither of them seems to have a clear idea of who Lil Wayne actually is doesn’t seem to matter that much.

Jacobson and Glazer are both the stars and creators of Broad City, which began life as a web series. The show counts Amy Poehler (Saturday Night Live, Parks and Recreation) as an executive producer, and I imagine she informed some of the show’s more improvisational bits, like a colorful debate involving Michael Buble and Janet Jackson. (It’s also safe to assume Poehler’s comedy clout attracted guest stars like Amy Sedaris and former SNLers like Fred Armisen, Rachel Dratch, and Janeane Garofalo.)

However, the show seems very much like an expression of Jacobson and Glazer’s casually druggy, ’90s hip-hop-loving sensibilities. (The duo are gifted improvisers themselves.) Jacobson is the more neurotic and insecure of the pair. She also displays a great knack for physical comedy that comes in handy during Abbi’s many humiliations on the show. Glazer is the more impish and abrasive performer, but Ilana’s assertiveness and fierce loyalty to her best friend mostly counteract the character’s obnoxiousness. Yes, Broad City has its share of raunch and other potentially off-putting humor, but it’s told in an assured, exciting way that makes me interested in following Abbi and Ilana on their misguided adventures.

I will end with a bizarre fact that all the nudity (and there is a lot) is pixilated, even on the DVD. What is the point of copious nakedness if it’s hidden from view? Another contradiction? Or is it?