Posted in: No Huddle by Gino Sassani on October 2nd, 2019 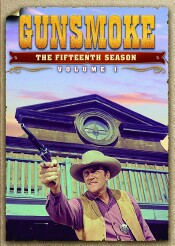 The 15th season is now out, and we’re closing in to that last handful of seasons. The two season halves have been released at the same time. It offers you the opportunity to buy it all together, and why wouldn’t you? You get 26 episodes on seven discs total. The only extras are a few episode promo spots.

Highlights from the season include: Stryker. We learn a lot about Matt Dillon’s past here. He was once the deputy to a marshal named Stryker. However, it was Dillon’s testimony that sentenced his former boss to 15 years in prison for murder. He’s out and has a little revenge on his mind. I love the back story stuff here. In The War Priest Kitty ends up kidnapped by a warrior Indian who is running from the Army. Matt Dillon has to track and find them before things get out of control. Matt Dillon ends up transporting a lot of prisoners, and this season there’s no shortage of adventures to be found on that road. In The Pack Rat, a trio of outlaws are willing to kill the marshal to free his prisoner. More of Dillon’s history is on display in The Badge. Kitty moves to another town after Dillon is nearly killed in a gunfight. In the new town she makes some discoveries about the marshal.

This was the show that keeps on going. While Dick Wolf managed to match the 20 years, Gunsmoke still has more episodes than any scripted television series in history. At 635 episodes, it’s proved its lasting power. Only The Simpsons beats it, so it’s the longest-running non-animated show in television history. We’re now only five seasons away from having the entire series out on DVD. That’s going to be nice to see it all up there on your video shelves. “I’ve been waiting a mighty long time for this.”

Gino Sassani is a member of the Southeastern Film Critic's Association (SEFCA). He is a film and television critic based in Tampa, Florida. He's also the Senior Editor here at Upcomingdiscs. Gino started reviewing films in the early 1990's as a segment of his local television show Focus. He's an award-winning recording artist for Omega Records. Gino is currently working on his 8th album Merchants & Mercenaries. Gino took over Upcomingdiscs Dec 1, 2008. He works out of a home theater he calls The Reel World. Favorite films: The Godfather, The Godfather Part II, The Body Snatcher (Val Lewton film with Karloff and Lugosi, not the pod people film), Unforgiven, Gladiator, The Lion King, Jaws, Son Of Frankenstein, The Good, The Bad And The Ugly, and Monsters, Inc.
Contest: Win Bonehill Road From WildEye Billions: Season Four