Life with Lucy: The Complete Series 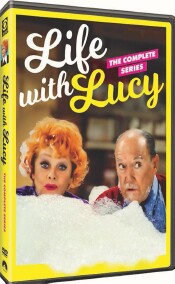 Lucille Ball was originally a radio personality starring in a popular comedy, My Favorite Husband. It was here that she began to develop the character she would continue to play for decades in television through several shows, all bearing her name in one form or another: I Love Lucy, The Lucy Show, Here’s Lucy, and Life With Lucy. See the pattern? Anyone who was a fan of the radio show would instantly recognize the red-haired actress even though they had never actually seen her on the radio. That exaggerated cry was already a staple of her physical comedy, even when she couldn’t be seen. She had also toured for many years with her real-life husband Desi Arnaz. When they could not convince a network to film a pilot of a show featuring both of them, they made it on their own dime. CBS was so impressed with the pilot they reimbursed the couple, and in 1951 I Love Lucy hit the airwaves.

Lucy played the character she had already perfected on radio and on the stage. Desi played her husband, a Cuban bandleader who headlined at the Tropicana. Lucy was always trying to find a way to get into Ricky’s act. She had no talent, but that never stopped her, usually embarrassing Ricky along the way. The couple lived in an apartment owned by the Mertzes, Fred (Frawley) and Ethel (Vance). They were not only the Ricardos’ landlords but also their closest friends. Ethel would often find herself talked into one of Lucy’s crazy schemes. The show also found comedy fodder in Ricky’s thick Cuban accent. Sometimes his mispronunciations caused hilarious misunderstandings. William Frawley as Fred had the job of playing straight man most of the time. It was a thankless job, to be sure, but he was perfect at it. He didn’t talk as much as the others, but he had some golden moments over the show’s very successful six-year run. During that time the series never once fell below number three for the entire year in ratings.

When I Love Lucy ended in 1959 (including the three-year run of The Lucy-Desi Comedy Hour) Lucy refused to go off into television sunset. Two solid shows would follow. The Lucy Show would debut in 1962. Lucy teamed with her old friend Vivian Vance, and for the first time she would work with her ongoing foil Gale Gordon. That show ended in 1968. The very next year she was back with Here’s Lucy, where she was joined by her real-life children Lucie Arnaz and Desi Arnaz, Jr. Once again her boss and foil was the lovable Gale Gordon. That show lasted until 1974 and would begin the longest television drought of Ball’s career. It wouldn’t be until 1986 that she would maker her return to television, but unfortunately it wasn’t a triumphant one.

Life With Lucy once again featured her teamed with Gale Gordon. Lucy Barker (Ball) was living with her children and grandchildren. She was running a jointly-owned hardware store while her partner and son-in-law’s father Curtis (Gordon) was on vacation. When he returns to find Lucy running the store and living with the kids, he has a bit of a fit and decides to also move in with the kids to keep Lucy from dominating the family. The antics of the two competing for attention and trying to run the business together were the core of the entertainment. The show also starred Larry Anderson as Ted, Curtis’s son, and Ann Dusenberry as Margo, Lucy’s daughter. There were also two grandchildren running about. The show featured memorable guest appearances by Peter Graves, John Ritter, and Audrey Meadows. Episodes were directed by Star Trek great Marc Daniels. Much of this a wonderful nod to the Desilu productions of both Star Trek and Mission: Impossible. There were many such nods and Easter eggs, but they weren’t enough to keep the ship afloat.

The show was cancelled after just eight weeks with five episodes that were filmed and never broadcast. You’ll get them here. There are a lot of reasons why the show just didn’t catch on. The world had changed a lot since Lucille Ball’s glory days. Her brand of comedy had almost become something of a spoof, and when she would do her trademark cry or other antics, they just didn’t have the kind of charm anymore. Age had also taken its toll, and the result was almost painfully obvious. I could never get used to seeing Lucy in the context of the more modern references that just didn’t feel like part of her world. Lucy took pride in the fact that she was indeed typecast, and she made it work to her advantage for four decades. Time had to run out eventually, and it did here. None of the plots were fresh or clever, and the show was strictly running on fumes from the pilot. It was a sad end to a rather glorious story, but it was indeed an end.

When the show was cancelled, it was the perfect storm of tragic events for Lucille Ball. A few days after she learned she was cancelled, Desi Arnaz died, and the loss was profound. While they had been split for decades and she was remarried, Lucy always felt close to Arnaz and always credited him with the innovations that launched her career. Ball would never fully recover and would pass herself a couple of years later.

So this is it. This is the last Lucy show we’re ever going to see, and with all of its flaws, it’s a part of television history. You get all 13 episodes and a couple short interview promos on two discs. As much as a lot of folks might have wanted to see Lucy back on top again, “I guess it was a mistake. A tragic, tragic mistake!”

Gino Sassani is a member of the Southeastern Film Critic's Association (SEFCA). He is a film and television critic based in Tampa, Florida. He's also the Senior Editor here at Upcomingdiscs. Gino started reviewing films in the early 1990's as a segment of his local television show Focus. He's an award-winning recording artist for Omega Records. Gino is currently working on his 8th album Merchants & Mercenaries. Gino took over Upcomingdiscs Dec 1, 2008. He works out of a home theater he calls The Reel World. Favorite films: The Godfather, The Godfather Part II, The Body Snatcher (Val Lewton film with Karloff and Lugosi, not the pod people film), Unforgiven, Gladiator, The Lion King, Jaws, Son Of Frankenstein, The Good, The Bad And The Ugly, and Monsters, Inc.
“31 Nights Of Terror” Tribute To Boris Karloff: Man Created A Man Stuber (UHD Blu-ray) (4K)