Posted in: No Huddle by Jeremy Butler on November 7th, 2019 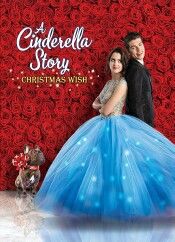 Wonder what happened to Laura Marano from Austin and Aly? Well, she is following in the footsteps of fellow Disney Channel actresses, Hilary Duff and Selena Gomez, by starring in the latest incarnation of A Cinderella Story, and this time it’s Christmas-themed. On the one hand, I am wondering how many different ways this premise can be recycled. I mean, it has already gone from a theatrical release movie (the first film with Hilary Duff) to a home media release (the second one with Selena Gomez). Given that that the story revolves around a girl being mistreated by her stepmother and step-siblings, you would think that there would be nothing new to add to that idea. Apparently that is not the case, as the film does a good job getting the audience prepared for the upcoming holiday season. Also starring Gregg Sulkin (Marvel’s The Runaways) as her love interest, the film is sweet and manages to entertain, despite not really breaking new ground.

Kat dreams of becoming a famous singer and songwriter, but in reality, she is forced to live as servant to her stepmother and step-siblings, all while holding down a job as an elf at the local Christmas-themed establishment (with her stepmother taking her tips). It is not all bad, as she is allowed to sing her original compositions for the people who frequent the establishment. While out one day, she suffers a rather embarrassing debacle in front of billionaire heir Dominic Wintergarden. Her family and Dominic’s friends ridicule her, but Dominic attempts to help her. Their eyes meet and there is a connection, but she is whisked away by her callous stepmother.

Wishing to put the entire situation behind her and focusing on surviving until she is 18 and can claim the inheritance left to her by her dearly departed father, Kat focuses on her job. Meanwhile, Dominic, hoping to prove himself to his father, takes a job at the same establishment where Kat works, as Santa. Not recognizing each other due their costumes, there remains the connection between the two. Meanwhile, the Wintergarden annual gala is approaching, and Kat’s stepmother is determined to go and sink her hooks into the elder and widowed Wintergarden.

So, we already know that this story ends with a happily ever after, so let’s not focus too much on that. The thing that I want to draw focus to is the connection between the two leads, because that is what keeps the film from becoming completely stale and cheesy. That is truly a testament to the dedication of these two young actors, especially given the ridiculous idea that they don’t recognize one another because of a Santa beard, as well as fake elf ears and wig. Granted, I will admit that Marano’s face was obscured by the debacle during their first meeting, but at a certain point Sulkin’s character gets a good enough look at her face to recognize her later. Therefore, the idea that he spent days looking at the same face and did not recognize does not pass muster. In the words of my wife, Sulkin and Marano are cute together. There is an element of wonder that comes from their portrayal, in which they see each other for the person they are inside.

Part of accomplishing this goal was with the reveal of Sulkin’s character’s fortune, where he points out how everyone just assumes that he is only interested in the finer things and content with just living off his father’s fortune. Providing this context keeps his character from being one-dimensional. I would say that his character had the most growth, despite his counterpart being the main focus of the film, which is not to say that Marano’s character did achieve growth when she finally stood up for herself against her step-family, but given this was a necessary progression to complete the story, it does not have the same significance in my opinion.

The target audience of the film is obviously pre-teen girls, and though this should be taken with a grain of salt because I am both an adult and male, I do believe that the story will resonate with them. I tried to involve Nalyce, but it wasn’t really her cup of tea just yet. I have no doubt that within five years that I won’t be able to get her to stop watching movies like this.

Just in time for the holiday season, I would encourage folks to watch this film as a family, in order to get the most from the experience. It will likely help get the whole family in the spirit for the holiday. As the fifth film in the Cinderella Story franchise, I would like to tell you that there won’t be more to come, but let’s be honest, I’d be lying if I said this will be the last one.

Jeremy Butler is a film school graduate of the International Academy of Design and Technology. He is been writing for Upcomingdiscs since 2012; however, movies have played a big part of his life for much longer. Favorite genres include horror, science fiction/fantasy, and comedy. Favorite movies are V for Vendetta, Boondocks Saints, Kiss Kiss Bang Bang, and The Godfather.
Motherless Brooklyn Yellowstone: Season Two (Blu-ray)