Posted in: The Reel World by John Delia on November 8th, 2019 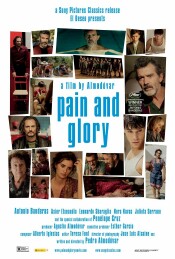 Taking a lot of liberties while giving a cinematic interpretation of a time in his life, Pedro Almodovar’s movie Pain & Glory is as expressive as Roma. His directing and screenwriting is by far some of the best I’ve seen by the famous director, and yes, there’s a spark of surprise in this one, as in every one of his films. Taking extra liberties, he even shocks his audience at one point. That said, if you are a fan of Almodovar’s films, then you will not want to miss the amazing performances that bring the man’s film to the big screen. The story follows Salvador Mallo (Antonio Banderas), a screenwriter and director who has had huge success with his film Sabor. He has not written another for some time, yet he’s still known by many for his work. Now living in semi-seclusion, we find him working on a new project while visiting the past in his mind. In flashback, we see his life at an early age (Asier Flores) and his inquisitiveness that led him to become a great director. His darker side includes taking a turn with drugs and a gay lover from the past.

Beautiful and endearing scenes featuring Penelope Cruz as his mother are sensational and memorable as she enjoys trips to the river to wash clothes and sing with the other women. As a mother, she’s loving yet strong when it comes to her only son.   The beauty and touching visual sensation she shows is a sample of what Almodovar is capable of drawing out in his actors, and Cruz is one of his prime examples. Cruz always gives her all to a film, and the camera loves her in this one as she shines.

But the film best performance goes to the amazing depiction of Salvador by Antonio Banderas, who steps out of his normal to deliver a role that is easily in consideration for an Oscar.  It’s not easy to play both sides of the coin, but Antonio nails it. Not flinching at doing scenes that are openly out of his ordinary realm, the love that he shows burns up the screen.

Pain & Glory has been rated R for drug use, some graphic nudity, and language. The explicit nudity is male frontal, and the drugs are prevalent throughout. The movie spools out in Spanish with English subtitles. Not my cup of tea, but still a very good effort.

John Delia has been on all sides of the movie business from publicity, writing for publications and on line blogs, script writing, to film making. Writer, critic, film editor he has worked as a film critic on this second go around for 14 years. He earned his Bachelor’s degree at the college of Journalism and Communications at the University of Florida in Gainesville, Florida. John is an active member of the Southeastern Film Critics Association (SEFCA) . Favorite Films: Lord of the Rings/Hobbit trilogies, The Godfather trilogy, the Indiana Jones trilogy (I didn't like the 4th), The Avengers and for TV it's Game of Thrones. As for animation it's a tie between anything Pixar and everything Hayao Miyazaki.
Yellowstone: Season Two (Blu-ray) Spirited Away Collector’s Edition (Blu-Ray)