Posted in: No Huddle by Gino Sassani on October 2nd, 2021 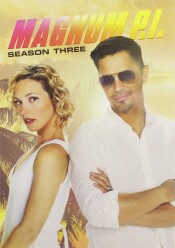 Revamping old shows and movies is the latest trend in television. CBS has made several endeavors at this with varying success. Such was their attempt when they tried to convert Rush Hour into a TV series; however, the Macgyver reboot gaining a fourth season shows that the practice is not without its merits. CBS’s recent reboot of the popular series Magnum P.I. is the newest foray into this genre of television, and the fact that it has earned a second season bestows credit onto the show. Starring Jay Hernandez in the titular role, the character that Tom Selleck made famous, is breathing new life with new action. Minus the mustache, of course.  Staying true to its source material, Hernandez’s Magnum is a former Navy Seal, and his best friends T.C and Rick are Marines. While staying true to its source, the series also digs deeper into the characters’ connection by illustrating the three as former POWs along with a fourth compatriot whose death serves as the catalyst for the pilot episode.

With the exception of this arc, every episode unfolds in a Monster of the Week format, which is best suited for the show in my opinion. It makes every episode a standalone, assuring that audience members can enter the show at any episode without fear of being completely lost, as well as guaranteeing that each mystery will be wrapped up by episode end, reducing anxiety attributable to curiosity over what will happen next. Like the original series, each episode features a voice-over narration from Magnum. T.C. and Rick also draws parallels to their original characters, with T.C. owning and operating a helicopter business that Magnum uses as his own private chauffeur service, while Rick is a club owner with connections that Magnum uses to solve his cases.

Now that we have established how the characters are similar, we need to address a major change from the original show involving one particular character: Higgins. Higgins is now a woman. Despite the gender swap, her relationship with Magnum is still the same. In her eyes, he is a freeloader living off the charity of Robin Master (and yes, like the original show, this character is mentioned but never seen). Though their relationship starts off coolly, they eventually develop a friendship leading to her using her former MI-6 skills and contacts to aid him in his investigations. Of course, those feelings are evolving in ways the original show would not have even hinted at. But what about the Hawaiian shirts and the Ferrari, you ask? Well, these two items are also featured in the reboot. A running theme in the show is that Magnum wrecks the Ferrari and has to pay to have it repaired. In fact, Magnum’s use of Robin Master’s prized car is the source of much of the banter between Magnum and Higgins. So the character may have changed somewhat, but the key attributes that fans loved are still present in this reboot.

The series also shares the same universe as another CBS reboot, the long-running Hawaii Five-0 series, featuring multiple crossover characters including the medical examiner Noelani Cunha and everybody’s favorite proprietor of shave ice, Kamekona Tupuola. A shared universe between TV shows — we all know what that means. A crossover episode is a definite possibility. The show also introduced a new character starring another CBS alumnus, Tim Kang, who plays HPD Police Detective Gordon Katsumoto. Magnum spends most of his time drawing Detective Katsumoto’s ire for his blatant disregard for police procedure and his constant insinuation into open cases.

This season continues where the second left off. In order for her to stay in the country, Magnum was going to fake–marry Higgins. That was made unnecessary when Robin gave the estate to Higgins, giving her an American company to run, meaning they can remain in the country. But now Higgins is Magnum’s boss, and that leads to some rather comic moments. In the first episode Higgins gets shot, and that introduces her to Dr. Ethan Shah, who saved her life and is played by Jay Ali. He becomes a romantic interest, and that, of course, brings out the emotions between Higgins and Magnum, but never overtly. That brings us to a season finale where he asks her to join him overseas with Doctors Without Borders. It’s a separation I don’t expect to end.

You get all 16 episodes on four discs with only a gag reel and some deleted scenes for extras. It’s a new Magnum, and it’s kind of finding its legs still. “See how you like this.”

Gino Sassani is a member of the Southeastern Film Critic's Association (SEFCA). He is a film and television critic based in Tampa, Florida. He's also the Senior Editor here at Upcomingdiscs. Gino started reviewing films in the early 1990's as a segment of his local television show Focus. He's an award-winning recording artist for Omega Records. Gino is currently working on his 8th album Merchants & Mercenaries. Gino took over Upcomingdiscs Dec 1, 2008. He works out of a home theater he calls The Reel World. Favorite films: The Godfather, The Godfather Part II, The Body Snatcher (Val Lewton film with Karloff and Lugosi, not the pod people film), Unforgiven, Gladiator, The Lion King, Jaws, Son Of Frankenstein, The Good, The Bad And The Ugly, and Monsters, Inc.
The Many Saints of Newark SEAL Team: Season Four