Posted in: Podcasts by Gino Sassani on October 10th, 2021 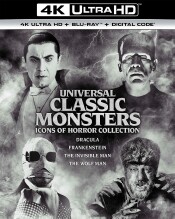 After nearly 100 years the Universal Horror cycle stands as one of the most enduring collection of horror movies today. Their influence on modern horror is unmistakable. There have been literally thousands of incarnations of Dracula, The Wolf Man and Frankenstein’s Monster, but the first image that comes to your mind will always be the nightmare creations of those Universal films. Now the first collection of Universal Horror classics finally comes to UHD Blu-ray and glorious 4K. It doesn’t get any better than this. A while back I got to talk with Sarah Karloff, daughter to the legendary monster himself, Boris Karloff. Here what she had to say about those monsters of the past. Bang it here to listen to my interview with Sara Karloff

Gino Sassani is a member of the Southeastern Film Critic's Association (SEFCA). He is a film and television critic based in Tampa, Florida. He's also the Senior Editor here at Upcomingdiscs. Gino started reviewing films in the early 1990's as a segment of his local television show Focus. He's an award-winning recording artist for Omega Records. Gino is currently working on his 8th album Merchants & Mercenaries. Gino took over Upcomingdiscs Dec 1, 2008. He works out of a home theater he calls The Reel World. Favorite films: The Godfather, The Godfather Part II, The Body Snatcher (Val Lewton film with Karloff and Lugosi, not the pod people film), Unforgiven, Gladiator, The Lion King, Jaws, Son Of Frankenstein, The Good, The Bad And The Ugly, and Monsters, Inc.
No Time To Die Lady of the Manor