Night of the Animated Dead (Blu-ray)

Posted in: No Huddle by Brent Lorentson on October 13th, 2021 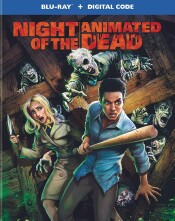 “They are coming to get you, Barbara.”

Step aside, Gus Van Sant’s 1998 remake of Psycho; there’s a new most useless remake (of all time) in town. Seriously, to whoever is responsible for getting this film green-lit, I seriously hate you and all that you’ve done to George A. Romero’s classic and not to mention groundbreaking film. The fact that his name isn’t even in the credits on the Blu-ray is equally a blessing and a low blow. George A. Romero’s Night of the Living Dead is pretty well known for being the first film to depict zombies as undead, flesh-eating beings and literally kick-started its own subgenre in horror. It’s also perhaps known for one of the biggest blunders involving copyright protection, which resulted in Romero losing out on millions and the distributors pocketing most of the financial gains the film had. In 1990, Tom Savini would go on to remake the film, but this time shoot the film in color and also update it with new and improved special effects. The remake is good, but not great, but it would introduce many horror fans to Tony Todd before he took on the now iconic role of Candyman. So in the age where Hollywood is obsessed with reboots and remakes, what makes this film stand out as the dumpster fire that it is?  Simply put, this was obviously not a passion project, but instead an obvious cash grab that has the artistic integrity of an amateur porn film.

For fans of Romero and of his zombie films in particular, I’ll simply say don’t waste your time, and simply forget this film even exists.  Quite literally this disc will bring more satisfaction being used as a coaster for your drinks than to watch it if you are a fan of the 1968 film or even the 1990 film. This film offers up nothing of value to the story with the exception of some “gory” animation of some kills and of the corpses. Then there is the animation. It’s terrible and choppy and just doesn’t work for this film.  There is zero atmosphere and just looks more like scenes done for early generation Playstation system than a film given distribution from Warner Brothers.  Clearly this film had a small budget and was made at the bare minimum, so it will possibly just break even. Had the filmmakers given a damn about the intellectual property they were financially exploiting, they would have hired a crew of animators that could have actually given this story depth or at least be pleasant to look at. I’m not expecting quality like Frank Miller or Todd McFarlane or even Tony Moore from The Walking Dead comics, but this looks like they simply hired interns who had no experience with horror.

Honestly, the saving grace for this film is the voice talent; apparently this is where the budget went. Barbara is voiced by scream queen Katharine Isabelle, and she does a good job in the voice department, but honestly this is a casting choice I would have loved more to see her actually on screen for. Dule Hill takes on the role of Ben, another actor I would have enjoyed seeing more in front of the camera with this role. Harry is played by Josh Duhamel, and then Judy is voiced by Katee Sackhoff.  Now, for those who are unfamiliar with the plot, it’s fairly simple, Barbara is visiting at a cemetery with her brother, and they are randomly attacked by a zombie.  Barbara manages to make her escape and ends up in a remote farmhouse where she meets Ben and a group of other survivors, and they have to survive the night from a horde of zombies.  It is relatively simple, but what Romero injected in the film that gave it an added layer was a social commentary, and the fact that Ben was an African American and the hero of the film, well, this was relatively unheard of at the time, and to a degree is still not as common as you’d expect. A lot of the tension between the characters that was present in the original film has been taken away to make this a more fast-paced story. At 71 minutes there is a good chunk of the script that’s been tossed aside, and yet everything that was added does little to help this story.  The long animated sequences with the characters arguing with the uninspired animation just don’t translate as well, and honestly, it just makes this film boring.

I really can’t think of anything positive to say about this release.  I love zombies, and I love George Romero’s films even more.  If they at least attempted something original like maybe a more modern take on the original, just that little bit would have been an improvement on what this final product is. I know Warner has a good animation department, but this isn’t an example of it at all.  If it wasn’t for the original script, I’d say this film would be borderline unwatchable. If this were a student project or even an independent release, maybe I could be more forgiving, but when you have Warner Brothers putting out your project, audiences deserve better.

Brent Lorentson is a horror writer and film critic based out of Tampa, Florida. With a BA in Digital Film, he co-wrote and co-directed Scavenger Hunt. His short stories have appeared in various horror anthologies. In 2019 his short script Fertile Blood will be a part of the anthology horror film Slumber Party. He is currently working on his first novel A Dark and Secret Place set to be released in late 2019. Favorite Films: Taxi Driver, Fight Club, I Saw the Devil, The Wild Bunch, Dawn of the Dead, A Clockwork Orange, Pulp Fiction, Heathers, The Monster Squad, and High Fidelity.
Lady of the Manor The Blacklist – Season 08