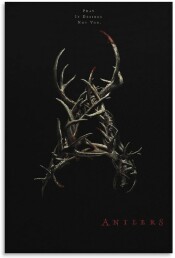 “Can anyone give me an example of a myth or a story They’re afraid of?”

Look at every element of Searchlight’s new horror film Antlers and you see nothing but the promise of an extraordinary horror film. Guillermo del Toro is one of the producers and he’s got a reputation for building some of the best horror atmosphere you’ll ever see. He’s one of those visual geniuses that has been inspired by the black & white classics of the genre and his imagination is truly amazing. The film is based on Nick Antosca’s short story The Quiet Boy which itself has some pretty incredible imagery. The film also sports a pretty sweet cast starting with Keri Russell known for the Cold War series The Americans. There’s Jesse Plemons who blew me away on Friday Night Lights and hasn’t disappointed yet. Young Jeremy T. Thomas has a pretty good career if his performance here is any indication of what he can do. The kid does one of the best deadpans I’ve seen since Christina Ricci’s wonderful Wednesday Addams. The British Columbia locations are truly stunning. This looks like a truly great film. And it’s certainly not a bad film. But it’s far from great. It’s an okay film and often that would be fine with me. I enjoy an average horror film as much as the next guy. The trouble is this should have been great and that’s a huge disappointment.

Julia (Russell) is returning to her quaint little Oregon town after spending years in California. She moves in with her brother Paul (Plemons) who is now the town sheriff. In her classroom she encounters Lucas (Thomas) who strikes her as disturbed and possibly abused. He has been drawing some seriously dark images that have begun to haunt her. Who get a small glimpse of Lucas’s family as the film begins and we know there was some kind of a trauma that in some way harmed his father. It’s all very vague and Julia starts to look into the kid’s homelife and history. Meanwhile little brother Paul is dealing with ripped and mutilated bodies that are starting to pile up as people start disappearing. It isn’t the kind of thing he’s used to in this quiet little town. Of course, we know the two situations are related and Julia eventually ends up alone at the family home where she encounters something horrific. Eventually we’re following the path of a Wendigo and finally piece together what happened to Dad earlier. Young Lucas has been attempting to control the beast and keep it fed so that it doesn’t munch on the local folks about. Well… that doesn’t really work out well. Of course, if it did we wouldn’t have a very interesting horror film, now would we. The problem is it isn’t as interesting as it should be.

All of the performances are great. Kudos to the kid who does a great job all around. In fact kudos all around for a great cast. The story has so much potential that is never explored. Instead director Scott Cooper went too often for the simple path and the cheap scare instead of building with some of these really incredible pieces he has at his disposal. My greatest frustration is with the story behind the creature. The previous sheriff and Paul’s mentor is a Native American who starts to put the puzzle pieces together. He knows what this creature is and he eventually lets the good guys know and that’s about 2 minutes of the film. This was an opportunity to give this character far more life. He’s Van Helsing for crying out loud and he’s given no time to give us the real goods. It’s all glossed over when there was a huge chance to develop some truly atmospheric folklore and explore the old sheriff’s spiritual connection to the story. Graham Green is a terrific actor and his character is just begging to put some meat on this story, at least in my mind he is and he never gets that chance.

Don’t get me wrong. There is a really good creature here with a lot of fright potential. And because of that and all the other positive things I’ve mentioned we get a pretty good movie. But I gotta believe that Graham Green would tell us he could have given us a great one. Instead you’ll get your scares. You’ll get a fun film that will entertain you but it will be forgotten and that’s more the pity. “A cautionary tale for people who believe in it.”

Gino Sassani is a member of the Southeastern Film Critic's Association (SEFCA). He is a film and television critic based in Tampa, Florida. He's also the Senior Editor here at Upcomingdiscs. Gino started reviewing films in the early 1990's as a segment of his local television show Focus. He's an award-winning recording artist for Omega Records. Gino is currently working on his 8th album Merchants & Mercenaries. Gino took over Upcomingdiscs Dec 1, 2008. He works out of a home theater he calls The Reel World. Favorite films: The Godfather, The Godfather Part II, The Body Snatcher (Val Lewton film with Karloff and Lugosi, not the pod people film), Unforgiven, Gladiator, The Lion King, Jaws, Son Of Frankenstein, The Good, The Bad And The Ugly, and Monsters, Inc.
The Suicide Squad (UHD Blu-ray) (4K) Superman – The Complete Animated Series (Blu-Ray)