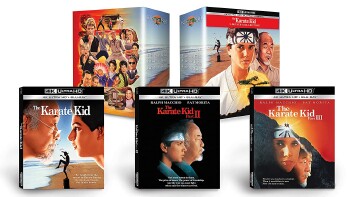 I think I see your problem. You have this list. It’s a list of people you need/want to buy a Christmas gift for. The trouble is that they’re into home theatre, and you don’t know Star Trek from Star Wars. You couldn’t tell a Wolf Man from a Wolverine. And you always thought that Paranormal Activity was something too kinky to talk about. Fortunately, Upcomingdiscs has come to the rescue every Christmas with our Gift Guide Spotlights. Keep checking back to see more recommendations for your holiday shopping. These gift guides ARE NOT paid advertisements. We take no money to publish them. With conditions as they are, shopping won’t be easy this season. The nice thing about discs is that they’re so easy to get from places like Amazon that you can give a great gift and stay perfectly safe while you do it. This spotlight is on Sony Pictures release of The Karate Kid 3 Film Collection in 4K.

In the 1970’s, Pat Morita was pretty much a staple of the American television landscape. It’s fair to say he often got work in a less politically correct era as a token Asian on situation comedies. He landed iconic recurring roles as Arnold, who owned the burger hangout in Happy Days, and Ah Chew, the target of Redd Foxx’s bigoted antics on Sanford And Son. His is a long career in the annals of 70’s television. While he did appear in a few feature films, none of these appearances had the lasting fame or adoration that he experienced as Mr. Miyagi in the Karate Kid franchise. The role would define him for the remainder of his days. When Karate Kid appeared in 1984, it delivered a modest return at the box office but found some enduring returns in the young home video market. It was enough to score a sequel in 1986 that would become the best moneymaker of the franchise’s original collection of four films. It pulled in enough scratch to warrant a third film, and that’s pretty much where it all went downhill faster than a speeding bullet, which might have mercifully ended the movies on a high note.

Daniel (Macchio) is forced to move from his familiar surroundings in Newark, New Jersey for the sunshine and palm trees of Southern California with his mother who is trying to raise him on her own. He has trouble adjusting from the beginning. He tries to get to know a pretty girl named Ali (Shue), who shows him some interest. Unfortunately, his interest in her leads to bullying by Johnny (Zabka), who runs a local motorcycle gang and also happens to be the local karate champ. He is trained at Cobra Kai by ruthless sensei Kreece, played by Cagney& Lacey’s Martin Kove. He teaches relentless brutality and never showing mercy. Daniel is in a pretty bind until he goes to see the apartment maintenance guy who happens to know more than a little bit of karate himself. Mr. Miyagi is played by the aforementioned Pat Morita. To stop the bullying, Daniel must agree to compete in the tournament just two months later, and Miyagi agrees to be his trainer. It doesn’t appear to be working out for Daniel, as he appears to be more of a slave than a student. He’s painting fences and the house along with washing and waxing old cars. But this leads to one of film history’s most famous training sequence. The famous line “Wax on. Wax off.” and that magical moment when Daniel realizes that he’s been training all along.

If any of this sounds a bit like Rocky, there are several reasons for that. Director John G. Avildsen also directed Rocky and Rocky V. He also brought along composer Bill Conti from those films to do the score here. Many of the Rocky themes can be found here, and this original film has become a classic just like Stallone’s iconic character. The real heart of the film comes from the developing relationship between Daniel and Mr. Miyagi. There are some truly tender and emotional moments here, and the unlikely pair create wonderful chemistry. They are a compelling team to watch, and the heart of these films exited stage left as soon as they tried to do these films without both of these stars. Honestly, the next three films start to lose steam almost immediately with paper-thin plots that just don’t seem to matter when these two actors and characters are together on the screen.

It’s two years later, but on the screen it’s like no time has gone by at all. There’s a reason for this. The film begins with a totally unnecessary recap of the important story beats of the first film and treat us to an equally unnecessary scene that takes place in the parking lot after Daniel wins the match. It’s mostly Miyagi giving some payback to Kreece. It’s the biggest blunder of the film and franchise, as it’s repeated in the next film as well. After about 10 minutes of this nonsense, the film starts to go its own way, and Kreece isn’t a part of any of it.

Mr. Miyagi receives word that his father in Okinawa is very ill. So he decides to go home and see him. Daniel’s mother is taking care of a sick uncle, so he ends up tagging along with his teacher and friend. In Okinawa Mr. Miyagi finds his father has died and his Uncle Sato, played by the original Hawaii Five-O’s Danny Kamekona, has been holding a grudge because Miyagi had left the family at a crucial time. Sato has been very successful and even owns the land where their family’s village sits upon. Sato wants revenge, and after giving Miyagi three days to mourn his father, wants to fight him to the death to satisfy this honor grudge. Of course, Miyagi doesn’t want to fight, and he looks for ways to avoid the confrontation. Of course, Daniel has found another girl, and lo and behold, another bully. This time it’s Sato’s son who uses the grudge to be cruel and try to force Daniel into fighting him. A storm rages through the village, and the confrontations come and one of the opponents finally has a change of heart when he witnesses Daniel’s bravery saving another family member.

This film isn’t quite as good as the original. It hits too many of the same beats, and they don’t work quite so well the second time around. What does work is the flipped location. Now they are more in Miyagi’s turf but still find the same problems. What also works is how much this film deepens the relationship between these two characters. Both continue to shine, and their heart is once again compelling even if the story isn’t.

The film begins by reminding us of the events of the previous movie. Martin Kove played a karate master named Kreese. He trained through brutality and a bit of anger. Of course, Ralph Macchio’s Karate Kid, Daniel, ends up beating his prize student to win a coveted championship. The defeat was a public humiliation for Kreese, whose life began to spiral out of control in the aftermath. He lost his students and his dojo. He lives in disgrace. But all of that is about to change, and in a plot that was recently reworked for the latest Creed film, Kreese is looking to regain his dignity. He turns to an old Vietnam War comrade, Terry (Griffith), who is now the sleazy owner of a toxic waste disposal company. He agrees to bankroll Kreese in his attempt to take down Miyagi and Daniel. The problem is that Kreese is looking for revenge instead of redemption. They recruit Karate’s bad-boy up-and-comer, Mike Barnes (Kanan), to defeat Daniel for the championship.

The trouble is that Daniel and Miyagi aren’t interested in a return to karate competition. Daniel wants to find a way to repay his teacher and uses his college fund to buy a broken-down storefront to open a bonsai tree shop. As luck would have it, the storefront sits across the street from a small homemade pottery shop run by the attractive Jessica, played by Robyn Lively. But the romance is threatened by Mike Barnes and his goons bullying Daniel into entering the contest. The harassment becomes too much, and Daniel enters with the expected results.

The biggest problem with this movie is how much everyone appears to be phoning it all in. The series’ popularity comes from its heart and emotional journey. None of that happens here. The writing is exceptionally lazy. The villain, Terry, is reduced to a typical mustache-twirling villain, and there is just no depth to the character anywhere. His own motivations are paper-thin, and he has goons with names like Snake. They might as well have put them in hoodies with the word Henchman 1 and Henchman 2. We could have filmed the “lair” of the bad guys at an angle and called it 1960’s camp. On second thought, 1960’s camp was fun. There’s nothing fun about The Karate Kid Part III. The climax is an even worse joke. The henchmen literally surround the mat during the tournament hurling cliché taunts during the match. Really? No one took this film seriously, not the writer, the director, or the actors. Pat Morita appears literally in pain trying to portray this previously heartfelt character. Ralph Macchio destroyed his chances of continuing his career at a better pace by being difficult on the set. He was abusive and showed up late to the shoot. He would later blame the unfinished shooting script. It’s obvious this production was a mess from start to finish and ended the Macchio participation in the franchise.

Sony gives you both the Blu-ray discs and the UHD discs in three separate cases with nice sleeves. It all fits into a sweet box. The only real new extra is found on the UHD of the first film. It’s a look back from a few of the actors. Unfortunately, Pat Morita is no longer with us, and that dampens my excitement for these features, but it is a good coda to the original three films. This is the ultimate collection of the three films that feature both Macchio and Morita. They look fantastic. The grain stands out and the UHD upgrades look really sweet. Of course, you might be able to find the old DVD’s. “J.C. Penney, $3.98. You like?”

Gino Sassani is a member of the Southeastern Film Critic's Association (SEFCA). He is a film and television critic based in Tampa, Florida. He's also the Senior Editor here at Upcomingdiscs. Gino started reviewing films in the early 1990's as a segment of his local television show Focus. He's an award-winning recording artist for Omega Records. Gino is currently working on his 8th album Merchants & Mercenaries. Gino took over Upcomingdiscs Dec 1, 2008. He works out of a home theater he calls The Reel World. Favorite films: The Godfather, The Godfather Part II, The Body Snatcher (Val Lewton film with Karloff and Lugosi, not the pod people film), Unforgiven, Gladiator, The Lion King, Jaws, Son Of Frankenstein, The Good, The Bad And The Ugly, and Monsters, Inc.
Holiday Gift Guide Spotlight: Warner Brothers/CW Television Sets Holiday Gift Guide Spotlight: The Film Detective – The Sherlock Holmes Vault Collection