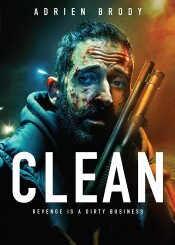 I’m still looking for answers. I just don’t know the questions anymore. I just know there’s too much out there. Seas of filth. An endless onslaught of ugliness. Blight. Plastic. Cheap s#$t cloggin’ up our minds. Cloggin’ up the drains, poisoning our water, turning us to s@4t. Where does it all go? I’ve got blood on my hands. I’m stained. I’m dirty. No matter how hard I try, I can’t wash away the past.

With Adrien Brody’s picture-perfect delivery of this monolog, I was all in with this film. It was like Brody’s voice was made for this voiceover. And while the film did have some intriguing moments, it didn’t really break any new ground like I hoped it would. It reminded me of a couple years ago when Hollywood tried to remake Death Wish, and while I did enjoy this film immensely more than that one, Clean isn’t a film that I will feel compelled to rewatch anytime in the near future. The film essentially has more of a one-and-done feel to it.

Brody stars as Clean, a garbage collector leading a fairly quiet existence. Or perhaps a better word would be self-exile. It is hinted at very early on that Clean used to be a violent man, a killer, but a tragic circumstance prompted him to turn his life around. That circumstance, without giving too much of the plot away, has marked and shaped the person he’s become and involved possibly the only person on the planet that he loved. This tragedy is what makes the character relatable, as it is very clear that he is not looking for nor does he believe he deserves redemption. However, that is essentially the purpose of the film: redemption. To that end, Clean becomes involved in a situation that has life-threatening implications for him, all for the sake of saving someone who serves as a reminder of the person he loved and lost.

When it comes to setting up this arc, the film follows the recipe to a tee. It establishes the connection between our protagonist and the object of his redemption very early on. It creates an obstacle, which prompts Clean to go against his better judgement to intervene, thereby pitting him against a dangerous and resourceful enemy. Dangerous and resourceful may be a bit of a stretch, I suppose. While it is true that Glenn Fleshler’s character did have corrupt cops in his pocket, there never really appeared to be a match for Brody’s character. He dispatched them fairly easily, and as far as it goes, from the other men at Fleshler’s disposal, they weren’t much of an obstacle either. That was probably my biggest issue when it came to the film; there was no real obstacle, in my opinion. Don’t get me wrong, Brody’s character still had to go through the trouble of dispatching folks, but at no point did I believe that he was in danger of losing.

This is partially explained away by the character’s backstory as a ruthless and merciless killer. Even so, I think a couple of setbacks were needed to even the playing field a bit. I suppose it could be argued that the character suffered at least one as the situation was being built up, but as it was before the character was fully engaged, it didn’t have the desired effect. Something else might have gone a long way towards rectifying the mix-match power dynamic, perhaps laying in a connection between our protagonist and antagonist. Maybe give them shared history, like our protagonist being formally in the employ of our antagonist. It isn’t new ground, but it would have provided an opportunity for Fleshler’s character to appear as if he was going into the situation with both eyes open. Maybe even warn his men not to tag Clean lightly, and when they did, it would have bolstered the credibility of Clean’s reputation in his past life.

As is the film is good, but in my humble opinion, the aforementioned avenues would have elevated the overall story and made for a more compelling cinematic experience. That aside, I did enjoy the film, especially the action sequences. I’m not used to seeing Brody in action sequences. I’m aware that he’s done action films in the past (i.e. Predators), but in this film he really got his hands dirty. I mean that both literally and ironically given the title of the film. On top of that, his weapons of choice were creative in themselves. The shotgun was a straightforward tool, but outside of that, everything else he wielded was pretty unconventional: wrenches, screwdrivers, and even a flare gun. Above all else, the weapons selection makes the film stand out, as well as makes for gritty and graphic kill sequences.

I would say Clean is definitely worth seeing at least once. While it does not reinvent the wheel, there are some elements of the film that made it a unique and enjoyable experience. Besides, how often do you get see someone use a wrench as their weapon of choice? That alone makes it worth watching at least once.

Jeremy Butler is a film school graduate of the International Academy of Design and Technology. He is been writing for Upcomingdiscs since 2012; however, movies have played a big part of his life for much longer. Favorite genres include horror, science fiction/fantasy, and comedy. Favorite movies are V for Vendetta, Boondocks Saints, Kiss Kiss Bang Bang, and The Godfather.
Touch of Evil (UHD Blu-ray) (4K) Beverly Hills Cop II (UHD Blu-ray) (4K)