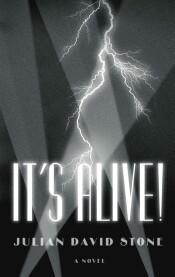 We mostly deal with movies and television shows here at Upcomingdiscs. As the name implies discs are what we’re all about. But once in a while we find something we just have to tell you about. Many times we take a look at books written by or about the film industry folks. It’s rare when I came upon a novel that I just have to tell you about. It’s Alive is deserving of that rare post. Written by Julian David Stone the novel takes us back to the Hollywood of the 1930’s. It’s the very first days of the “talkies” when actors first spoke on film. It was the height of the “studio system” where stars were at the beck and call of the studios who paid their salaries. It was also the rise of Carl Laemmle, Jr. or Junior to those who knew him. His father, Carl Sr founded Universal Studios and now it was Junior’s turn to shine. It’s just days before the production start on Frankenstein and Junior still can’t convince his father that these horror films are going to launch Universal into the future. Worse. He still hadn’t decided who would play the pivotal role of The Monster. Bela Lugosi was intended for the role following his hit in Dracula but he was playing hard to get. There was this other guy discovered by the film’s director, James Whale. He was an unknown small-bit actor by the name of Boris Karloff. We all know how it turned out. Now go deep inside and see how it almost didn’t happen. I read the book and I loved it. I also got the chance to spend some of my Memorial Day Monday talking with the book’s author. Now you get to eavesdrop on that conversation and let us take you back to 1931. Bang it here to listen to my interview with Julian David Stone.

You can pick up the book from our Amazon link to the right. You can also head over to the author’s web site here: Stone Web Page.

Gino Sassani is a member of the Southeastern Film Critic's Association (SEFCA). He is a film and television critic based in Tampa, Florida. He's also the Senior Editor here at Upcomingdiscs. Gino started reviewing films in the early 1990's as a segment of his local television show Focus. He's an award-winning recording artist for Omega Records. Gino is currently working on his 8th album Merchants & Mercenaries. Gino took over Upcomingdiscs Dec 1, 2008. He works out of a home theater he calls The Reel World. Favorite films: The Godfather, The Godfather Part II, The Body Snatcher (Val Lewton film with Karloff and Lugosi, not the pod people film), Unforgiven, Gladiator, The Lion King, Jaws, Son Of Frankenstein, The Good, The Bad And The Ugly, and Monsters, Inc.
Infinite (UHD Blu-ray) (4K) Jurassic World Dominion