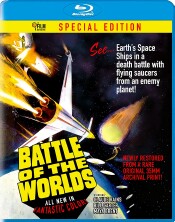 “Most things happen unexpectedly, even the apocalypse!”

I can’t deny that Italians, we love to cook and eat. It’s a stereotype that I embrace with pride. So it shouldn’t be too much of a surprise that food finds its way intruding in other aspects of life. In the 50’s and 60’s we called the Italian western films of directors like Sergio Leone Spaghetti Westerns. Later we would talk about the Italian horror films from masters like Mario Bava and Dario Argento Spaghetti Nightmares. Well, why should we leave out the same period’s Italian science fiction films? So even if it’s not terribly original, I’m going to coin the term Ziti Sci-Fi. One of the true masters of Ziti Sci-Fi has to be director Antonio Margheriti. Don’t be too surprised if you don’t know the name. His films were always low-budget affairs, and he usually directed under the more American-sounding name of Anthony Dawson or Anthony M. Dawson. He understood that the American audience was the Holy Grail of box office success, so he attempted to make his films appear in the promotions as if they might be American or at least British films. Like many foreign genre films at that time, it was also important to get a relatively well-known American actor to lend their name to the project. The original Godzilla shot American scenes that featured Raymond Burr to sell here, and Margheriti was no different. Now thanks to a restoration and release by Film Detective, we get to see one of his better films.

Battle Of The Worlds hasn’t been available in anything better than washed out VHS or DVD bootlegs in the decades since its American release in 1964. The Film Detective release features a restoration that doesn’t really cover up any of the flaws of the no-budget film, but it restores it to the color and clarity that you would have seen in an American drive-in movie house in the mid 1960’s. The work is actually quite astounding. I have an old bootleg of the film, and the difference is somewhat shocking. If you’ve been searching for the film or have been content with your brightly-washed, almost monochromatic copy, you need to check this out.

Battle Of The Worlds might appear by the title to be a foreign ripoff of George Pal’s film of H.G. Welles’ novel War Of The Worlds, and why wouldn’t you think that. Margheriti wasn’t immune from that process, and he knocked off his share of imitations of films, including Alien, which is kind of ironic, because Ridley Scott often talked about the inspiration he received from Margheriti. But this time you would be guessing incorrectly.

The film begins by introducing us to two young lovers playfully enjoying some time at the beach. Dr. Fred Steele (Orsini) is reporting for his last day of duty at a remote astronomy observatory. He’s leaving with his fiancée, Eve (Brent) to be married. After their little frolic in the surf, things are about to change in their lives. Fred discovers an unusual object has entered the solar system and appears to be headed for Earth. There’s a bit of a heated discussion among the observatory’s staff, and it’s decided that someone needs to inform the leader of the group, Professor Benson, played by film legend Claude Rains. No one wants the job because the professor is considered more than a little eccentric and also often hostile. Fred doesn’t have anything to lose. I mean, this is his last day. What could happen?

We meet Benson in his office that is more like a greenhouse than an academic setting. He’s surrounded by plants, and all of the pottery is covered with mathematical equations. It turns out he’s not surprised by the discovery. In fact he’s a bit disappointed that it took them so long. He has already christened the intruding body The Outsider and tells Fred there is nothing to fear, because it will miss the Earth by some 95,000 miles. Apparently while everyone knows Benson is a genius, he’s got a reputation for being arrogant and sometimes very wrong. Fortunately, Fred has a buddy running Mars Base Three, and he decides to ring up his old buddy Commander Bob Cole (Carter). They should have been the first to discover The Outsider but are experiencing a magnetic storm. By the time the secret is out, Benson has updated his calculations, and now he’s sure it’s going to collide with Earth in about 800 hours. This guy changes his mind so often and makes such crazy demands that the world leaders he has contact with on his television screens pretty much blow him off. But things change yet again.

The Outsider doesn’t collide. It goes into orbit around the Earth and unleashes a squad of flying saucers. Mars Base sends a fleet of rockets for the spectacular, for its time, space battle. Fred makes a discovery while joining the battle. If they turn off their radio signal guides from base, the saucers can’t detect them, and he manages to down one of the saucers. Turns out they are unmanned and utilize a computer guidance sound that Benson and Fred learn to replicate. After taking out the saucers, there’s just that big planet to deal with. Benson wants to explore it before it’s destroyed. The final 10 minutes of the film display obvious inspirations for future science fiction films that include Star Trek: The Motion Picture, Independence Day, and Close Encounters Of The Third Kind. Benson becomes obsessed with learning the secret of the race that sent their entire planet out in search of a new home for their race. It’s a rather dramatic and emotional climax that deserves a bit more cinematic historical significance than it ever gets.

“I don’t like the smell of the story, because it’s inspired by non-scientific notions.”

Claude Rains was 70 when he did this film that he later admitted was really just for the paycheck. And there’s been considerable debate about the level of his performance in the film. It’s not an Oscar-winning performance under any circumstances, but like the film itself, it’s hugely underrated. Rains never phones in a single line. He looks to be giving it everything he’s got, and honestly there are some really solid moments here. When he’s talking to the leaders on television screens, he is absolutely magnificent. I’ll admit that while he’s always pushing the performance, there are awkward moments when it doesn’t really fit the film or his co-stars. Most of that I chalk up to how much his co-stars had to be dubbed because they were Italian actors. I think Rains unfairly takes the hit for what is really a situational awkwardness. If you focus on him, you’ll see in his face that’s he’s not phoning any of this in. Often when a star is hired to add his name to market the film, their participation is minimal. Rains has a ton of screen time here, so he’s working as hard as anyone else on the film.

There’s an Audio Commentary by film historian Justin Humphreys. It’s a little dry, but you’ll certainly learn a lot about the film, cast, and Margheriti. There’s also a 30-minute feature on the director. I’m happy to add this one to the collection. I can throw out yet another crappy VHS tape and enjoy something in a way I have not encountered before. If this one sells well enough, I think Film Detective will dig up a few more gems for us. “I just had an idea, and naturally it’s a great one.”

Gino Sassani is a member of the Southeastern Film Critic's Association (SEFCA). He is a film and television critic based in Tampa, Florida. He's also the Senior Editor here at Upcomingdiscs. Gino started reviewing films in the early 1990's as a segment of his local television show Focus. He's an award-winning recording artist for Omega Records. Gino is currently working on his 8th album Merchants & Mercenaries. Gino took over Upcomingdiscs Dec 1, 2008. He works out of a home theater he calls The Reel World. Favorite films: The Godfather, The Godfather Part II, The Body Snatcher (Val Lewton film with Karloff and Lugosi, not the pod people film), Unforgiven, Gladiator, The Lion King, Jaws, Son Of Frankenstein, The Good, The Bad And The Ugly, and Monsters, Inc.
Caged Birds Film Noir: The Dark Side of Cinema VIII (Street of Chance / Enter Arsene Lupin / Temptation) (Blu-ray)