Posted in: The Reel World by Brent Lorentson on September 8th, 2022 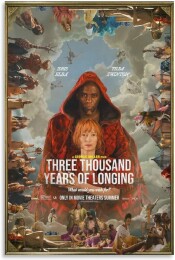 George Miller is a filmmaker who will forever be known for his Mad Max films, and to be fair, it’s a pretty awesome legacy to leave behind, but when you take a look at his filmography, it is one that is filled with variety. There is The Witches of Eastwick, his segment from The Twilight Zone: The Movie, and then there is Happy Feet, a variety that shows that he has more to offer than testosterone thrill rides. I feel it is worth mentioning this because it shows that as a director he’s willing to take chances and stray beyond his comfort zone and show that he is one of the more talented visual storytellers still working in the industry. The film Three Thousand Years of Longing is, simply put, a love letter to storytelling and its use over the existence of mankind. Sure, there are some mythical aspects involved and plenty of CGI, but at its heart the film is simply about two characters sharing stories inside a luxurious hotel room where Agatha Christie is said to have written “Death on the Nile”. Tilda Swinton plays Alithea, a self proclaimed “narratologist”, an academic who tells stories. She’s in Istanbul to help give a lecture on the history of storytelling, and it’s not long after her arrival that things seem to be a little strange. Alithea has a condition that causes her to hallucinate figures, OR does she have a gift to see into another realm? Miller really isn’t interested in what the truth is, and that’s one of the film’s strengths, it asks the viewer to ignore logic and simply accept fantasy for the next two hours. Logic simply has no place with this experience, and it’s something more if us should embrace when we consider the stresses in the real world that we are all dealing with these days.

Idris Elba plays the Djinn that Alithea releases in her hotel room. Though it appears some prosthetics and CGI were used to make the Djinn more whimsical, I appreciate that the look they went for with the film was nothing like the Genie we saw in the live-action film for Aladdin. To be fair, going into this film I was worried that this film would be just a more adult version of the Disney classic, though in the end it really had me calling back to the great 2006 film The Fall (if you’ve seen it, then this should get you excited for 3000 Years of Longing; if you haven’t seen The Fall, it is one of the most beautiful films ever put on the screen and should be seen immediately). I feel these movies perfectly complement one another with how they are filled with stories that are beautifully told cautionary tales. When Alithea is confronted with the task of making her three wishes, she is quick to object, and this begins the Djinn telling his story and about the previous people that had come before Alithea and were given the chance to ask for their wishes. The stories are told with a visual flair and are done in a stark contrast to the very sterile hotel room. The bond that develops between Alithea and the Djinn is very charming, but when it inevitably develops into a romance, this is where the film lost its hold on me.

The first two thirds of this film I thoroughly enjoyed, but when the film slides into its final act, I couldn’t help but feel it was rushed and to a point unnecessary. There is quite literally a point in the film where it should have just ended, and if it had done so I’d feel comfortable putting this on my list for top films of he year, but the last 20 minutes or so just ruined the spell the film had over me. I’m sure plenty of people will disagree, and that’s fine, but I feel in a move to please the audience and :give them what they want for the characters it ruins the magic if the first two acts of the film. I wouldn’t say this was going to be an award contender, especially with some potentially great films coming out in the next few months, but this could have been a film that haunted and stuck with viewers if the film just offered a little more ambiguity. I still enjoyed the film, and the performances by Swinton and Elba make this worth checking out, but I’m sure I won’t be the only one wishing this could have been something a little more than it was.

Brent Lorentson is a horror writer and film critic based out of Tampa, Florida. With a BA in Digital Film, he co-wrote and co-directed Scavenger Hunt. His short stories have appeared in various horror anthologies. In 2019 his short script Fertile Blood will be a part of the anthology horror film Slumber Party. He is currently working on his first novel A Dark and Secret Place set to be released in late 2019. Favorite Films: Taxi Driver, Fight Club, I Saw the Devil, The Wild Bunch, Dawn of the Dead, A Clockwork Orange, Pulp Fiction, Heathers, The Monster Squad, and High Fidelity.
The Tarzan Vault Collection Film Detective (Blu-ray) 1883: A Yellowstone Origin Story (Blu-ray)