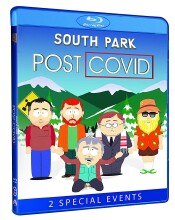 “From the green hills of Vermont to the verdant canyons of Arizona, people all over the country are beginning to realize it’s nearly over. We have almost beaten COVID, and the best news of all? Things are finally getting back to normal. Infection rates are at an all-time low. New stronger vaccinations have ebbed the tide. And we humans are cleaning up the mess and finally getting on with our lives But as we start to get back to our jobs and schools, one question remains: What lingering effect will the pandemic have on our children?”

This has been a tough year for everyone. Productions all around the world have been uprooted because of the pandemic. I guess I thought there might have been one place on this planet that was safe. OK, I made that last part up. We always knew that South Park was going to have a field day with COVID. Let’s be honest; the amount of material for the irreverent show is simply off the scales. There’s nothing like a global catastrophe to bring out the sharp wit of Trey Parker and Matt Stone. The pandemic meant we saw the long-running animated series limited just like everyone else. So instead of a 10-episode run, the 24th season of South Park was made up of two double-length “Pandemic Specials”, but just for whats and giggles, let’s call it South Park The Complete 24th Season, and then there were two Post COVID specials, and that’s what we have next, a look at it in Blu-ray.

Yes, the pandemic is finally over, but it appears it took 40 years to happen. The South Park boys have grown into adults, and most have moved away from South Park. Stan is now basically a booze-hound who spends his life “testing” booze for an online blog. He gets a call from Kyle, who is still living in South Park, and he’s got bad news. They’ve killed Kenny. It appears Kenny has become a world-renowned scientist who was closing in on how COVID got started when he turns up dead. His last notes claim he’s hidden the answer where only his closest friends could find it. So it’s back to South Park to discover some answers. If you saw the 24th season, you know how it got started. It turns out Kenny had discovered the secret to time travel, and now that he knew how it all happened, he was going back in time to stop it. But the experiment was a disaster, and the boys will have to figure it out.

But what about Cartman? He’s now a rabbi with a wife and kids, and Kyle is pretty convinced it’s a scam, but it’s Cartman’s love for his family that causes him to create an underground movement to stop Stan and Kyle from going back in time. If they fix COVID, his family would never have happened. So it’s just like the old days with the boys at odds and a struggle to win.

South Park has been locked down when it’s discovered that Kenny really died of a new COVID strain, the Delta Plus With Rewards Benefits Strain. No one gets in or out, because there’s a single unvaccinated citizen in South Park.

The special does a pretty cool job with the adult life reveals, and I actually ended up liking most of this “episode”. Being in the future, there’s a new endless line of jokes that are actually pretty cool. One of the running gags is that Alexa is now an AI and gives you crap about your life while getting jealous and angry. It’s HAL meets Amazon, and the result pretty much runs through both specials. I also rather like the fact that they played the old killing Kenny joke for an ultimate story. The problem here is that it ends where it all started, with Randy escaping from a retirement home and discovering there’s a single bud from his Tegridy Farms pot farm. You know where this is going. I know where this is going, and I’m none too happy about that.

The second special goes where I feared it would. Randy cultivates his pot, and that takes over too much of what was actually a good story. It’s Cartman’s Foundation To Fight Time Travel, or FAT, against everyone else. So the show becomes more Terminator with too many going back in time to stop too many things.

In the end it’s pretty much standard South Park, and there’s finally some hope that the 25th season will return to something like what we’re used to. Let’s hope.

Readers of this site know that I have a great fondness for the show. I love the entire non-political-correctness of it all. They cut all sides of the issues, and that continues here. I’m a little afraid the boys just aren’t hungry any more and might not even really want to keep doing this. I hope maybe if they go back to those things that made it all work from the beginning, it’ll be a big kick in the pants for the guys and bring back some of that clever stuff we all remember. The focus has to go back to the kids. I think they’ve beaten this dead horse of Randy’s pot business to such a point that the stench is going to drive me away before long. There’s plenty of good material out there, guys. Let’s get back to work and bring South Park back again. I long to hear Parker and Stone proclaim: “Let’s get back to normal.”

Gino Sassani is a member of the Southeastern Film Critic's Association (SEFCA). He is a film and television critic based in Tampa, Florida. He's also the Senior Editor here at Upcomingdiscs. Gino started reviewing films in the early 1990's as a segment of his local television show Focus. He's an award-winning recording artist for Omega Records. Gino is currently working on his 8th album Merchants & Mercenaries. Gino took over Upcomingdiscs Dec 1, 2008. He works out of a home theater he calls The Reel World. Favorite films: The Godfather, The Godfather Part II, The Body Snatcher (Val Lewton film with Karloff and Lugosi, not the pod people film), Unforgiven, Gladiator, The Lion King, Jaws, Son Of Frankenstein, The Good, The Bad And The Ugly, and Monsters, Inc.
Paranorman (UHD Blu-Ray) (4k) Holiday Gift Guide Spotlight: Warner Brothers Christmas Classics – A Christmas Story / Elf / The Polar Express / Christmas Vacation