Posted in Disc Reviews by Gino Sassani on November 1st, 2019 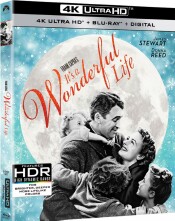 Every generation has had its Christmas classics, films that have become as much a part of the holiday family traditions as Christmas trees and candy canes. For me it has been the more modern A Christmas Story with ol’ Carl Kolchak himself, Darren McGavin. Kids today have taken more of a shine to even more recent films, but for more than one generation, Christmas wouldn’t be the same without Frank Capra’s It’s A Wonderful Life. Since 1947 the film became a seasonal fixture in neighborhood movie houses across the fruited plain. In the 1970’s the film temporarily fell into the public domain and was played relentlessly on local television stations as each holiday came and went. Unfortunately, these were usually prints in horrible condition, so that scratches and splice marks became a part of the experience, not to mention ads for department stores touting their early bird specials. It is with that experience that I, as did most from my generation, become acquainted with Jimmy Stewart’s George Bailey. When the home video market began to bloom with VHS in the mid 1980’s, a better print resurfaced, so that the experience improved dramatically, along with the loss of those commercials. Of course, this new resource of home entertainment created a fight for the rights to the film to once again be restored to a single owner. It ended up being the film’s score that would allow the rights to be enforced once again. The crappy television prints disappeared, and by the early 1990’s, efforts to restore the film began. END_OF_DOCUMENT_TOKEN_TO_BE_REPLACED

Posted in Disc Reviews by Archive Authors on December 12th, 2006

The Griswolds, a household name for a series of National Lampoon comedyï¿½s beginning with Vacation and most recently Vegas Vacation. Few of us could say these iconic characters havenï¿½t left an impression in our minds. I was happy when I heard that Christmas Vacation was going to be released on HD DVD, a true Christmas classic in high definition. With many memorable scenes associated with Christmas, is this classic worth the purchase in HD? END_OF_DOCUMENT_TOKEN_TO_BE_REPLACED