Where Was God? Stories of Hope After the Storm 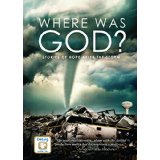 “There are some rough spots in His plan.”

I’m not the only person who’s reflexively rolled his eyes after an athlete or entertainer has thanked God for helping them win the Super Bowl or a Grammy. I personally don’t mean it as blasphemy; I just don’t believe God has a vested interest in the outcome of a football game. Following that logic, it seems silly to think He also roots *against* certain people. And if anybody has a right to feel like God is “against” them, it’s people like the real-life tornado survivors who appear in this admirable documentary, which illustrates how one can rise above anger and staggering loss. END_OF_DOCUMENT_TOKEN_TO_BE_REPLACED