Village of the Giants (Blu-ray)

Posted in Disc Reviews by Gino Sassani on February 23rd, 2022 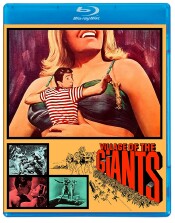 “And I thought we were pals.”

Bert I. Gordon and I shared a friend. He was one of Forry Ackerman’s favorite people, and when I would see Forry, he never failed to mention Gordon. Bert I. Gordon was once the king of schlock. He was as much a marketing genius as he was a filmmaker. Like William Castle, he knew how to find something zany and odd which was just different enough to bring in the audiences. I saw most of his films of the 60’s and 70’s at drive-ins where most of his films were shown in those days along with many of the Hammer and AIP Poe films from Roger Corman. If you look at the B films in the science-fiction/horror genres from that time, you will find them dominated by Gordon, Corman, and Castle. Gordon often used stories in public domain so that he didn’t have to pay a writer and he would adapt them with some clever “hip” idea and out would come a cheapie, but something that was always a hoot to watch. END_OF_DOCUMENT_TOKEN_TO_BE_REPLACED

Posted in Disc Reviews by Michael Durr on July 21st, 2020 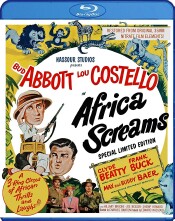 Despite my dad being away a lot on business as I grew up, he would often make the most of his time spent with me and leave lasting impressions on my mannerisms and character to this very day.  We would play baseball (even though I wasn’t very good); he would teach me about money and how to be financially sound (which for the most part I think I do OK).  He would also introduce me to the things he enjoyed, like root beer floats and Abbott & Costello.  Even though these days I can’t have many root beers, I can enjoy an Abbott and Costello movie almost any time I like.  One of those movies I remember watching with my dad was Africa Screams.  It was my distinct pleasure to watch that movie again and bring my review to you today.

END_OF_DOCUMENT_TOKEN_TO_BE_REPLACED

Posted in Disc Reviews by Gino Sassani on October 4th, 2013 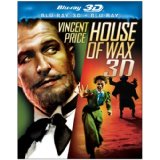 There’s a saying that in the land of the blind the one-eyed man is king. No one would have expected that a one-eyed man could become the king of 3D. But that’s exactly what happened with House Of Wax. The film has become one of the definitive films in the 3D format. To look at it on Blu-ray now, it holds up quite nicely in a day where 3D has become almost passé. Still, it’s hard to believe that Warner Brothers would choose a man with only one eye to shoot their 3D film. That man was Andre’ De Toth END_OF_DOCUMENT_TOKEN_TO_BE_REPLACED