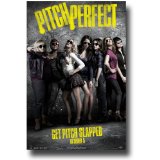 Pitch Perfect is the best big-screen a cappella comedy I’ve ever seen. Of course, the new film pretty much wins that title by default because the hyper-competitive world of collegiate a cappella has been largely ignored by the movies. To make up for that oversight, Pitch Perfect tries to cram all aca-related matters into one movie. The result is a slightly flabby 112-minute running time. Fortunately(?), I’ve been to enough a cappella competitions to appreciate the fact that the movie gets a lot of things right. (Including the annoying habit aca-people have of sticking “aca” in front of everything.)

Beca (Anna Kendrick) is a reluctant freshman at Barden University. (LSU’s campus stood in for fictional Barden.) She dreams of moving to Los Angeles and becoming a music producer, but is pressed into going to college by her dad (John Benjamin Hickey). Quite conveniently, Beca also has a good singing voice so she is recruited by the Barden Bellas, the all-girl group coming off a humiliating failure at the International Championship of Collegiate A Cappella (ICCA) competition that opens the movie.

The Bellas — led by domineering Aubrey (Anna Camp) and friendly Chloe (Brittany Snow) — are forced to ditch their old-fashioned fembot image and recruit misfits like Beca (who, gasp, has tattoos!), low-talking Lily (Hana Mae Lee) and Fat Amy (Rebel Wilson, horizontally running away with every scene she’s in). To win at ICCA, the Bellas are going to have to take down the Treble Makers, the reigning champions led by the phenomenally douche-y Bumper (Adam DeVine). Meanwhile, Beca’s burgeoning affection for nice-guy Treble Maker Jesse (Skylar Astin) complicates matters.

In case you’re thinking this sounds like Glee: The College Years — although I suppose Glee itself has now morphed into Glee: The College Years — the movie drops in a Christopher Mintz-Plasse cameo where he announces that collegiate a cappella isn’t some high school club where you sing, dance and tackle social issues. (“This s— is real life!”) That being said, the film can’t resist sneaking in a reference to “Regionals.”

Pitch Perfect is based on the non-fiction novel of the same name by GQ senior editor Mickey Rapkin, who followed groups from several different universities and chronicled their performances, rivalries and parties.

The source material accounts for the film’s authentic touches — like all-girl groups being underdogs because they can’t hit low notes as well — but the off-kilter humor comes from director Jason Moore (a Tony nominee for Avenue Q), screenwriter Kay Cannon (30 Rock), and co-producer/co-star Elizabeth Banks, who wrangled a handful of funny friends like Mintz-Plasse, Donald Faison and Joe Lo Truglio to make cameos. (Banks is less successful alongside John Michael Higgins as a pair of casually caustic announcers, a pale imitation of what Fred Willard did in Best in Show.) The Pitch Perfect team’s offbeat comedic sensibility is a good match for the outsider-filled world of a cappella and works better than some of the broader gags. (And I do mean “gags”: Too. Much. Vomit.)

Despite its authentic touches, Pitch Perfect borrows its predictable story structure from countless performance-based movies, most notably Bring It On and Drumline. (Not to mention its poster is a straight rip off of the promo art for Bridesmaids.)

Kendrick had her breakout, Oscar-nominated role in Up in the Air as the sort of sunny go-getter Beca would roll her eyes at. Here, she convincingly plays the outsider — and audience stand-in — who experiences the lunacy of the a cappella world for the first time. Kendrick is matched well by the immensely likable Astin (a Zachary Levi/Dane Cook lookalike), even if I didn’t totally buy Jesse’s obsession with The Breakfast Club. (That seemed more like something the screenwriter would be invested in rather than a college freshman in 2012.)

The biggest laughs come courtesy of Wilson, whose breezy, accented one-liners recall Russell Brand’s great work in Forgetting Sarah Marshall. (Way before we collectively got sick of Russell Brand.) I also enjoyed DeVine’s hideous rock star bravado as the leader of the “Bad Boys of A Cappella” as well as Ben Platt’s smallish role as a Treble Maker fan who is too nerdy to join the group. (Being too nerdy to join an a cappella group is like being too short to be a jockey.) I felt a little bit bad for Camp because she was stuck playing an uptight stick in the mud and…not much else.

Overall, the cast acquits itself nicely from a vocal standpoint — with a recording studio assist, of course — and the stage performances are appropriately energetic. The movie immediately grabbed my attention by unleashing an a cappella version of Universal’s animated logo, but the highlight is an after-hours Riff-Off battle.

Pitch Perfect probably won’t win any awards — although a 2013 MTV Movie Award is probably well within its reach — but I think it’s got the potential to be a mid-size hit. At the very least, it’ll be a compulsively re-watchable cable movie in a few years, and a must-see for a cappella groups across the country.