Posted in: The Reel World by Gino Sassani on September 28th, 2012 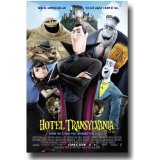 “Ever since you were born I wanted to protect my little ghoul. So I created a place where all monsters could be safe from them.”

I love monsters. Both old and new, I’ve been in love with monsters for as long as I can remember. There were the Friday night Creature Features with Dr. Shock. My Dad and I would watch the old Universal classics, and while I didn’t know it then, I was getting my first lessons in cinema. I was being groomed to become the film lover I am today. I still love monsters even when they’re making us laugh (preferably on purpose). I love Abbott & Costello Meet Frankenstein, and I recently got to renew my love for the animated camp romp Mad Monster Party. It was with this tradition in mind that I eagerly entered the screening for Hotel Transylvania.

Dracula (Sandler) has been a single parent since a mob with torches took out his bride. He raised the young batling lovingly and made her the center of his world. He decided that humans would not be allowed to harm his daughter, so he spared no expense to build Hotel Transylvania. With every security precaution known to man and monster, it is a safe haven for his daughter. For her 118th birthday Dracula decides to throw a big birthday bash for his daughter Mavis (Gomez). He’s been a rather overprotective father, and she’s never been out in the real world on her own. He hopes the big monster bash will take her mind off wanting to explore the world outside of Hotel Transylvania.

All of Drac’s buddies are invited. You have Frankenstein’s monster (James) and his bride (Drescher). Wolf Man Wayne (Buscemi) and his rather large clan of wife and hundreds of pups. It’s a full house. They’re here to have a great time and share their fear of humans. A surprise guest is Jonathan (Samberg), a human who sneaks on the property. He and Mavis hit it off, but Dracula wants to keep the two apart. He does develop a soft spot for the human and helps him to pretend to be a monster (Frankie’s nephew) to keep the other monsters from killing him. But romance is in the air, and monster and human may have to find a way to come together after over a century of fearing each other.

The idea of monsters fearing humans was handled far better in Pixar’s Monsters, Inc. The idea of a big monster mash-up party was handled better by Mad Monster Party. That means there is very little new to offer here. From beginning to end the story feels about as old and dusty as the Mummy’s bandages. The film tries too hard to remain harmless and inoffensive fun that it doesn’t take any chances at all. Technically it’s fine, and the 3D looks pretty good. It’s a nice shiny film that will likely be a pretty good time for the kids. But if you’re going to use these kinds of characters, you really need to include something for the adults. There’s just nothing here. It’s predictable and tame. Fran Drescher is particularly annoying as the Monster’s mate. I know it’s her “character” schtick, but since Jersey Shore the routine has really gotten stale. She brings it all crashing down every time we hear her voice. Am I the only one getting tired of her routine?

Adam Sandler channels his best Bela Lugosi, but the accent changes quite a bit throughout. Kevin James is a standout, but the real voice cast scene stealing is by the always great Steve Buscemi. The werewolf clan is the freshest part of the film. Samberg and Gomez provide the perfect lovesick teens here. Again, there just isn’t any place to go with this film. You’ll leave feeling like you’d already seen it before. Not the kind of memorable I had in mind.

I love a good monster spoof. It hasn’t been done well since Pixar. The end musical number is loud and obnoxious. Okay, maybe that’s just my age talking. As much as I like end credits, this one was a bit too hard on the ears. Of course, the kids will think it’s hip while mom and dad scratch their heads. “Don’t give me the pouty bat face.”

Gino Sassani is a member of the Southeastern Film Critic's Association (SEFCA). He is a film and television critic based in Tampa, Florida. He's also the Senior Editor here at Upcomingdiscs. Gino started reviewing films in the early 1990's as a segment of his local television show Focus. He's an award-winning recording artist for Omega Records. Gino is currently working on his 8th album Merchants & Mercenaries. Gino took over Upcomingdiscs Dec 1, 2008. He works out of a home theater he calls The Reel World. Favorite films: The Godfather, The Godfather Part II, The Body Snatcher (Val Lewton film with Karloff and Lugosi, not the pod people film), Unforgiven, Gladiator, The Lion King, Jaws, Son Of Frankenstein, The Good, The Bad And The Ugly, and Monsters, Inc.
Pitch Perfect Portlandia – Season Two (Blu-ray)