Posted in: The Reel World by Brent Lorentson on December 25th, 2012 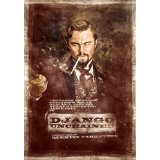 There is a difference between calling something the “best” and calling it your “favorite”.  For instance when I look back at the films I’ve seen over the course of the year, I can say Django Unchained is my favorite film of the year that I enjoyed immensely, but I don’t believe I can say it is the best film of the year.  Will Django be a film to live on for decades and be hailed a classic in the annals of film history?  It’s too soon to even suggest such notions, but what I can say is that the film was a hell of a good time.

Taking place in a pre-civil war era Dr. King Shultz (Christoph Waltz), a former dentist turned bounty hunter, is looking for a group of slave traders who have a slave in their possession who can help identify a group of men known as the Brittle brothers.  The slave in question is none other than Django (Jamie Foxx).  Seeing this slave is the only man who can identify the brothers, Shultz makes the decision to purchase Django from the traders, but this is a Quentin Tarantino film, and you know it can’t be that simple.  The scene sets the tone for the rest of the film, delivering crackerjack dialog followed by explosions of intense violence.

Their journey brings them to a plantation run by Big Daddy, whose introduction is quite memorable as he laments the sight of a colored man riding atop a horse, and on his property.  Django’s appearance in the gaudy blue suit simply adds to the humor of the scene that in another writer/director’s hands could have simply been viewed as offensive.  And that is a fine line Tarantino skillfully walks throughout the film.  As Shultz distracts Big Daddy, Django searches the plantation to find the Brittle brothers.  It’s here we are given a brief flashback to the horrors the brothers have committed, not just against Django but his wife Broomhilda (Kerry Washington).  What unfolds with this confrontation is a thing of savage bliss.  Following this confrontation we see Big Daddy with a clan of hooded vigilantes who deliver, in my opinion, the funniest moment of the film.

It’s after these confrontations and around a fire we are shown the true humanity in Shultz as he tells Django a story about the German origins of she for whom Broomhilda is named.  The childlike joy Foxx shows in this scene as he listens to Shultz tell this story is perhaps one of the more endearing scenes of the film.  This moment with our heroes (who have previously just killed several men) sitting around a campfire being sentimentalist and believing the notion Django and his wife will one day be reunited, is in fact rather a sweet moment.  It’s here I started viewing this not so much as just a revenge western, but as a fairytale romance for men.

Upon the discovery of learning that Broomhilda is now the property of Calvin Candie (Leonardo DiCaprio), a ruthless plantation owner whose plantation has been dubbed Candie Land,  this was the first time I’ve watched Dicaprio on the screen and felt he was more than a persona but actually acting, and damn, is he scary in this role.  Candie isn’t just satisfied with owning a successful plantation; his passion rests in Mandingo fighting where he gets the biggest and strongest slaves together in brutal fights to the death.

The plan that Shultz orchestrates to get Django through the doors into the slave fight club is a plan that shifts this film from being a western to a con-man film.  This shift could have been a disaster, and I’m sure there will be viewers who will feel this is nothing more than Tarantino being self-indulgent with having his characters talk.  But that is what he does best; simply throwing people in a situation and having his characters talk and react to a situation is what QT has mastered over the years.  Never has it been so apparent as with a dinner table scene at Candies plantation.  The twists the scene delivers and seeing the momentum shift from one character to the next is like nothing I’ve ever seen before.  And when this scene hits its climax…this will be one of the scenes Tarantino will be remembered for; not only will I go so far as to say this is the best scene Tarantino has written, but I will say this is one of the greatest scenes ever put to film.

The level of commitment Dicaprio put to this role is to be applauded; the fact that he injured his hand and continued filming as blood flowed from his hand is not only commendable but cringe-worthy when you see how the scene plays out.  In case you’re wondering what the scene is, trust me, you can’t possibly miss it.  But Dicaprio isn’t the only one on the plantation delivering a great performance against Waltz; Samuel L. Jackson delivers a more subdued performance that reminds us he’s more than just the coolest actor in Hollywood.  His performance as Stephen is brilliant, playing the head caretaker with so much depth and intelligence one could argue he could be the most vile character in the entire film, though no matter how vile he may be, he manages to make us laugh as well.

Getting more into the violence of the film, Django Unchained earns its R rating with blood-soaked ferocity.  Every swing of a whip, every gunshot hurts.  This may not be the most violent film, but it manages to have moments of carnage that are a punch to the gut.  Opting out from using CGI blood, we are given squibs filled with blood that spray the walls and camera.  Is the violence sensationalized?  Without a doubt it is, but not to glorify the violence but instead to reflect the brutality of what a man is capable of.

If I had to get into my complaints, the first falls upon Foxx.  He’s our hero, the man we’re supposed to cheer for and see find his wife, but he simply just falls into the background.  This film is owned by the stars that surround Foxx and, well, that’s a problem when the film is called Django.  Foxx did his best to try and deliver us a vengeful badass, but never gave us the heart and charm that is also in the character.  Thankfully the dialog and direction came through to elevate the performance.

My other issue is more of nagging feeling that I couldn’t figure out till I was reminded this was the first film Tarantino released without his editor Sally Menke who passed away in 2010.  I don’t think I can express how this affected my viewing, but the pacing just felt a bit off.  The decision to go with using hip hop in certain scenes, then at other moments an array of themes from famous spaghetti westerns, was a bit jarring as well.

The linear storyline may make the film more accessible to those that have had issues with his storytelling in the past, but the subject matter may make this film his most divisive.  How this plays out in the box office is anyone’s guess, but all this has done is ignite my excitement once again for whatever project Tarantino has planned for us next.

Brent Lorentson is a horror writer and film critic based out of Tampa, Florida. With a BA in Digital Film, he co-wrote and co-directed Scavenger Hunt. His short stories have appeared in various horror anthologies. In 2019 his short script Fertile Blood will be a part of the anthology horror film Slumber Party. He is currently working on his first novel A Dark and Secret Place set to be released in late 2019. Favorite Films: Taxi Driver, Fight Club, I Saw the Devil, The Wild Bunch, Dawn of the Dead, A Clockwork Orange, Pulp Fiction, Heathers, The Monster Squad, and High Fidelity.
House of Lies: Season One 12 Days Of Christmas Giveaways – Day 1: Lifetime Christmas Movie Collection