House of Lies: Season One

Posted in: No Huddle by Jonathan Foster on December 24th, 2012 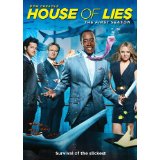 “My name is Marty Kaan, and I’m a management consultant. Every week, my team and I go somewhere and talk people into thinking they really, really need us.”

With that kind of opener, I was fully expecting House of Lies to be a darker, edgier, less ethical Leverage.  The sort of show where the main character is a loveable rogue whose failings are excusable because he’s just so gosh-darn charming. That notion was quickly dispelled, however, the minute the pilot opens with Marty (Don Cheadle) waking up in bed with a woman and freaking out about it. We learn the reason for his panic when he tells us (via breaking the fourth wall) the woman is his ex-wife. Marty’s problems only get worse from there. His ten year-old son, Roscoe, is a cross-dresser and wants the role of Sandy in his school’s production of Grease. Marty’s father is constantly telling him how to run his life, and his ex-wife (also a consultant) seems hell-bent on not only stealing Marty’s clients, but their son as well. All of these things would be enough to send anyone screaming to therapy, but Marty internalizes everything and channels it into his work. At work, Marty is ruthless, doing whatever he can to manipulate the client into spending more money on his services. His team, while not as experienced as Marty, is just as ruthless. There’s Jeannie, Marty’s second-in-command, who’s not above using her feminine assets to charm and distract a client. Clyde and Doug are like a crude Abbott and Costello, cracking jokes (usually about women or each other) and spinning numbers and data to their advantage.  They may not have morals, but if you want your business turned around, these are the people to call.

House of Lies starts off slow here in its first season, with the first few episodes introducing you to all the characters (regular and returning) who will play a part in developing the story arc throughout the season. It doesn’t really hit its stride until about halfway through, when all the seemingly separate subplots start to weave themselves together. The character of Marty Kaan could easily been played as a stereotypical shmuck with family problems, but Don Cheadle plays him with a underlying sense of vulnerability that almost makes you like Marty, and you can’t help but feel impressed when he closes a big account. Ben Schwartz and Josh Lawson are hilarious as Clyde and Doug, spitting out one-liners and spinning the numbers so Marty can close the deal. Schwartz and Lawson could have their own spin-off show where they just riff on each other, they’re that good. Clyde and Doug really help lighten the tone of the show. The biggest disappointment is Kristen Bell’s character, Jeannie. Now, I adore Kristen Bell (I’m a HUGE Veronica Mars fan), but her character isn’t given much to do. For the first seven or so episodes, it seems all Jeannie does is roll her eyes at the antics the men in her group perform. When we finally get to see more of her character, it is an intriguing revelation that shows just how complex this lead female character is and how good Kristen Bell is. The recurring characters of Greg Norbert (Greg Germann) and Griffin Dunne’s crazy “Rainmaker” always liven up any episode they’re in.

While the many subplots are interesting, I have to say, it’s a bit distracting and hard to follow when the show jumps from Marty’s problems with his family, to his dealings with ex-wife, to him worrying about a potential merger that would see him fired, and so on. If they had picked three storylines to work on and fleshed them out more, this would have been a more solid first season. My only other complaint (and I never thought I’d ever have to write this) is that there’s too much sex in this show. I realize this is Showtime, but give me a break. Not only are many of the scenes needless, they take valuable airtime away from more interesting plot developments. I hope next season they trim the storylines and we learn more about Marty’s group. I’m curious to see where they’ll go from here.