Posted in: The Reel World by Brent Lorentson on April 5th, 2013 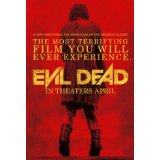 Remakes, reboots, and sequels: these are the trends in Hollywood that seem to make fan boys groan.  Some films should be left in the past, and some franchises simply need to come to an end.  But every so often a film comes along that dares to show us something new, and the end result manages to capture some of the magic that got us to love the original film to begin with.  The new Evil Dead filmmakers managed to succeed in doing just that and deliver a film that has me excited about what is next for the Book of the Dead and all those unfortunate enough to flip through its pages.

For those who are unfamiliar with the Evil Dead franchise, this entry into the series will likely be a gore-soaked experience you won’t soon forget.  And for the hardcore fans of the series, there are plenty of winks and nods to the previous entries to keep you grinning as well as some new twists to the mythology that you’ll either find groovy or you’ll simply sink into your seat and groan.  But one thing is for certain, fans will miss their beloved Ash and his “boom stick” this go around.

The film wastes no time letting us know something isn’t right with this lonely cabin in the woods.  We come in after a family has fallen victim of the Book of the Dead. For me this scene shouldn’t even be in the film; giving viewers a tease of what’s to come simply ruins the impact of what follows later in the film.  I understand this is an age where the idea of developing characters and plot takes a back seat to placating an audience filled with teens with ADD who can’t keep their faces away from a cell phone through a film. But to spoil so much in the opening minutes is just criminal. Beyond the nonsense of seeing a father face the consequences of reading from the book while surrounded by creepy-looking townsfolk and some old lady, none of these characters are explained or even mentioned after the opening credits roll.  This sequence irks me so much; though it may be creepy, it offers nothing to the story and simply cock blocks better scares that follow later in the film.

With the opening sequence out of the way we meet up with a group of five friends getting together at the cabin where we saw all the previous chaos unfold.  This isn’t just friends getting together for drinking and sex; in fact, it’s the opposite;  Mia ( Jane Levy) has been brought out to the middle of nowhere for an intense detox session.  Mia has the best intentions with getting clean, but her friends seem to know the likelihood of her having a relapse, so they make it clear to her brother, David ( Shiloh Fernandez) that he can’t cave and let her leave before she is better.  At first I wasn’t sure how I felt about this approach, but as the story unfolds I could appreciate how this almost instantly gives us an attachment to all those involved.  There’s no drunk jock to hate on, no slutty girls to shake our head at knowing they’ll be dead in the next reel; instead we get characters who are good people just trying to help a friend, and for me this made a greater impact once things began to go horribly wrong.

Things of course start to go wrong once the group stumbles upon the basement where something grotesque occurred (thanks to the opening scene there is no mystery to what happened, but I don’t plan on spoiling it for you); as they venture deeper into the basement Eric (Lou Taylor Pucci) discovers the Book of the Dead, which is wrapped up in plastic and barbed wire.  To look at the barbed wired package you have to know nothing good will come from opening this, but of course this is a horror film, and he’s going to open it up.  From the moment Eric begins to read passages from the book, the film takes hold and simply continues to tighten its grip and is unrelenting till the final credits roll.

What I can’t express clearly enough is, if you have a hard time watching blood, gore or needles, this film may not be for you.  I’m having trouble thinking of a film with more blood and gore than this film.  There is a bathroom scene that not only involves some hardcore self-mutilation but also one of the most intense scenes involving a needle I’ve ever witnessed, and damn, did it have my pulse racing.  If this were the only gory scene in the film, I’d feel comfortable saying this was one of the more violent films I’ve seen in a couple years, but that is merely only a taste of the bloody dismemberments to come.  Now before anyone gets the idea this is gory just for the sake of being gory, let me just say, no.  This is gore that makes you cringe, makes you want to turn away not because it’s gross (though it is) but because you care about these characters and you feel the pain and disgust right along with them.  This is what evil should look like, this is what true horror would be, not some monster in the woods but to be possessed and doing unimaginable horrors upon yourself and loved ones without control.

This is a story about a brother trying to mend a broken relationship with a sister who has suffered a lot of emotional pain and just needs the love of her family.  The dynamic of Mia and David is so well played that despite knowing that one should kill the other to protect the group (yes, being vague on purpose) that you can appreciate they are willing to do whatever it takes to find another way.  This isn’t the story of Ash simply trying to survive the night as his friends are dying around him.  What we get instead is a story about blood and family coming together to face evil and not to survive but to allow their loved ones to survive.

Even if the film dropped its opening sequence I do have some issues with the film, things that just do nothing for the plot like there being a dog.  I’m all for there being animals involved, but short of it finding the basement for the group it really serves no purpose to the story.  Also for those survivalists out there, apparently duct tape is the key to mending most bodily injuries; I’m hoping the excessive use of duct tape was intended as a joke, but even for a joke it goes a bit too far.  Sure, I can nitpick and complain about little things, but for the most part the movie exceeded my expectations.

I can’t say that I like this film more than the 1981 release of Evil Dead, but what I can say is that this is a worthy installment to a franchise that is dear to my geekiness.  For me this is merely a continuation of a story Sam Raimi and company began many years ago.  Heck, for those who are fans of the series and Raimi’s work you’ll recognize one of his “characters” resting outside the cabin.  For those who want to bicker about it not having Bruce Cambell in the film, no need to fret, since Raimi announced he’s working on the script for Army of Darkness 2 this summer.  What fans should be most grateful for is that we got a film that not only doesn’t suck but is pretty damn good…And for those who do plan on seeing the film, there is a groovy little surprise at the end of the credits.

Brent Lorentson is a horror writer and film critic based out of Tampa, Florida. With a BA in Digital Film, he co-wrote and co-directed Scavenger Hunt. His short stories have appeared in various horror anthologies. In 2019 his short script Fertile Blood will be a part of the anthology horror film Slumber Party. He is currently working on his first novel A Dark and Secret Place set to be released in late 2019. Favorite Films: Taxi Driver, Fight Club, I Saw the Devil, The Wild Bunch, Dawn of the Dead, A Clockwork Orange, Pulp Fiction, Heathers, The Monster Squad, and High Fidelity.
The Frankenstein Theory Jurassic Park 3D