Posted in: No Huddle by Archive Authors on April 4th, 2013 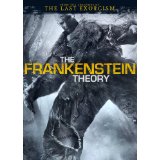 Many small unheralded horror films are produced, and they easily slip through the cracks. The Frankenstein Theory is one. It has an interesting premise, though. In 2012, Professor Jonathan Venkenheim takes a film crew to the Arctic to document the attempt to prove that Mary Shelly’s Frankenstein was a true story based on his great, great, great grandfather’s letters. Venkenheim is a highly educated, nervous, and nerdy academic who is obsessed with this possibility. The documentary crew and Venkenheim’s own girlfriend think his obsession is driving him a little mad, but they want the job, and Venkenheim will not be deterred. The engine that drives the professor’s obsession is the belief that his family name should be credited with the greatest scientific discovery of all time.

The film crew seems a little immature and unprofessional and adds an air of silliness to the initial attempts to get footage as they go on a journey through Canada. The professor’s nervous intensity is also somewhat comedic. A welcome gravitas comes from the stern guide who will guide them through the north country. After a while the guide seems more and more like Quint from Jaws. In this case Jaws might be the Frankenstein monster. Most of the cast is relatively unimpressive except for the guide, played by Timothy V. Murphy, who has a very recognizable face from film, TV, and commercials.

They crew flies up to Whitehorse in the Yukon so they can begin the journey by land through the Northwest Territories. One of the best things about the movie is some of the scenery, filmed mostly in Alaska. It certainly wouldn’t be the acting, writing, or directing. The film uses the fairly overused gimmick of “found footage”. The biggest problem when you use this technique is to have the “actors” behave in a believable manner. This actually requires a very subtle understanding of human behavior, and any attempts to “act” are usually read as phony. That’s what often happens here.

The producers of The Last Exorcism also have another problem here. Since this is clearly a low-budget production, they are limited in their ability to portray a Frankenstein monster. They attempt to solve the problem by severely limiting any sightings of the monster, or as Venkenheim would prefer, scientific test subject. They also make use of the limitations by maximizing the buildup of increasing suspense. As their journey seems to become more and more dangerous, Venkenheim seems to believe when he encounters the creature he will be able to reason with it. They encounter increasingly cold, desolate, and unsettling conditions as they head north. Ultimately, they arrive at a location where their only shelter is a primitive wooden yurt. It is at this location that most of the climactic action takes place. The way the story plays out it could just as easily be a search for the abominable snowman, the mysterious Yeti, or Bigfoot. We do get to meet the creature on a few occasions, but we would hope if there is ever a sequel, they will spend more time actually showing the creature.

On the plus side, much of the location photography is enticing while showing the frigid and unforgiving locations. Also, the basic premise is sound and would benefit from a little more rigorous treatment. This film doesn’t do enough to bring out the potential of this concept. I would definitely welcome a second attempt at this concept with more attention paid to the creature itself. It is a classic story.