Posted in: The Reel World by Gino Sassani on April 5th, 2013 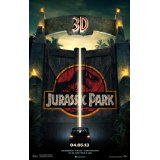 With those words begin an adventure that started with the legacy of Willis O’Brien’s  The Lost World. You see, dinosaur films are nothing new; they have held our child-like fascination since the industry was born. Jurassic Park was, however, something very new when it thundered into our cineplexes and forever in our imaginations 20 years ago. The marriage of brand new CGI technology with Stan Winston’s superbly detailed animatronics models transports you back 65 million years in time. CGI technology has improved since then and has become somewhat commonplace, but there is nothing common about Jurassic Park.

Jurassic Park not only broke ground in its fantastic visual presentation, but in its audio presentation as well. It was the first film to be released with an accompanying digital soundtrack in theaters that were equipped to handle it. With one roar of a T-Rex, digital audio was born in our movie houses. It was the perfect film to make the milestone. When T-Rex delivers his first roar on screen, we can’t help but be spellbound. The iconic scene was one of those perfect moments. Spielberg was smart enough to eliminate any of John Williams’ brilliant score. There is silence…until there isn’t. And it’s the ear-piercing shrill of the dinosaur that fills the room. There have been few cinematic moments that have been more memorable or immersive. It almost couldn’t have been better…almost.

Now you get to see the landmark film for the first time all over again. Universal has spent considerable resources and care to perform a 3D conversion on the movie. I know what you might be thinking, but you’re wrong. Conversions are never as good as 3D films shot that way natively. That still holds, and of course we can’t go back and change that when it comes to Jurassic Park. We get the next best thing, and while I’m certain that the film would have been far more impressive had Spielberg had this technology 20 years ago, the new release pulls out all of the stops to draw you back into the world of Jurassic Park. The conversion never stoops to the gimmick level. The 3D only enhances what is already there. Honestly, there are many moments when it’s almost invisible. Still, there are certain moments that will grab you like never before. The raptors in the kitchen is one of those moments. The close-ups of the raptors provide an even greater layer of realism. I never would have thought it possible. Add the large IMAX experience and this truly is Jurassic Park for the first time.

If you don’t already know the story, shame on you. Most of you can skip this little paragraph and go straight to the head of the class. John Hammond (Attenborough) has an idea for an amusement park that would spin Walt Disney in his grave. Using blood from ancient insects caught in amber Ingen obtains dinosaur DNA. Soon cloned dinosaurs are the star attractions at Hammond’s Jurassic Park.

Bonding agents are a little nervous, so Hammond hires Alan Grant (Neill), famous dinosaur expert, and Ian Malcolm (Goldblum) to put their stamp of approval on the project. Approval becomes secondary when a disgruntled computer programmer shuts down the Park’s vital systems to steal dinosaur embryos.

Grant and Malcolm along with Hammond’s grandchildren and Grant’s partner (Dern) spend most of the film being chased by the Park’s prized T-Rex and the intelligent Velociraptors.

I think what stands out for me isn’t even the new 3D conversion. The biggest surprise is noticing just how well these 20-year-old f/x hold up. That’s rare, at least for me. I can still love the classic f/x of 1960’s Star Trek or any 20-year-old film. I’ll accept the dated f/x because that’s the way it is, and they might have been groundbreaking at the time. But no matter how much you still love it, you can’t help but notice the “strings” of it all. We’re getting spoiled more and more each year. Folks like Peter Jackson’s WETA have delivered stunning images that just weren’t possible 20 years ago, or were they? Jurassic Park still looks incredible. The dinosaurs sell just as well today as they did back when. And that’s on an IMAX screen.

I’ve been told there are still a handful of folks out there who have never seen Jurassic Park, and you know who you are. You can run, but now it’s impossible to hide any longer. You have a date with a T-Rex and his nasty little friends. It’s time you booked a couple of hours in “the only amusement park where the exhibits eat the customers”.

Gino Sassani is a member of the Southeastern Film Critic's Association (SEFCA). He is a film and television critic based in Tampa, Florida. He's also the Senior Editor here at Upcomingdiscs. Gino started reviewing films in the early 1990's as a segment of his local television show Focus. He's an award-winning recording artist for Omega Records. Gino is currently working on his 8th album Merchants & Mercenaries. Gino took over Upcomingdiscs Dec 1, 2008. He works out of a home theater he calls The Reel World. Favorite films: The Godfather, The Godfather Part II, The Body Snatcher (Val Lewton film with Karloff and Lugosi, not the pod people film), Unforgiven, Gladiator, The Lion King, Jaws, Son Of Frankenstein, The Good, The Bad And The Ugly, and Monsters, Inc.
Evil Dead (2013) Down the Shore (Blu-ray)