Down the Shore (Blu-ray) 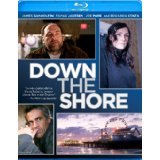 For better or worse — okay, it’s worse — it’s now impossible to hear the words “Jersey” and “Shore” without thinking of a certain group of knuckleheads on MTV. Down the Shore is a dreary, observant drama set in the region and starring James Gandolfini. If anyone is ever going to restore the area’s good(?) name, you figure the Sopranos star is a better bet than most, having previously dominated the Garden State from a pop culture standpoint by starring in the landmark television drama.

Funnily enough, Down the Shore actually opens in a sunny playground in Paris. The first scene is a meet-cute between French merry-go-round operator Jacques (Edoardo Costa) and American tourist Susan (Maria Dizzia). Fast forward three months later with Jacques traveling to the Jersey Shore to inform Susan’s brother Bailey (Gandolfini) that his younger sister is dead. On top of that happy news, Jacques and Susan had actually gotten married, and Susan left Jacques half of the house where Bailey currently lives. Bailey — who works as an amusement park operator on the Shore (apparently, Susan was drawn to certain types of men) — is understandably not happy about any of this, while Jacques is merely trying to carry out his late wife’s wishes and is willing to pull his weight at the park.

The park is owned by Wiley (Joe Pope), Bailey’s boorish best friend since they were boys who bonded over their bad dads. Wiley is also married to Mary (Famke Janssen), Bailey’s childhood sweetheart. Jacques’ arrival and Wiley’s increasingly unstable behavior lead to a revelation from Bailey and Wiley’s past. Bailey has been beaten down by life — you can practically see the weight of the world on Gandolfini’s broad shoulders — but these recent events help spur his desire to break free from his bleak existence.

The recurring amusement park motif utilized by first-time director Harold Guskin — working from a script by Sandra Jennings — turns out to be shrewdly ironic because this really is a depressing film. (I believe the working title for this project was James Gandolfini is Sad and Angry.) I think I can handle a downbeat story better than most, but the melodramatic beats in Down the Shore mostly rang false. On the other hand, Guskin absolutely nailed the somewhat miserable beauty of the film’s setting and captured the relentless grayness of everything in Bailey’s life. (Credit should also go to cinematographer Richard Rutkowski and production designer Mary Frederickson.)

Before taking on — and crushing — the iconic role of Tony Soprano, Gandolifini was a solid, steadily-employed character actor in movies. So I suppose I shouldn’t be surprised that, despite winning a shelf-full of trophies for the HBO drama, Gandolfini has mostly returned to bit roles on the big screen. Down the Shore is a rare lead role for the actor, who plays a wounded bear of a man very well. Unfortunately, that same heft and presence makes Bailey not totally believable as a tentative man who has let life take a dump all over him. Thank goodness for Costa as the lone ray of sunshine in this cloudy story. The actor brings an easy charisma which makes you believe in the idea that Susan impulsively married Jacques. As Bailey and Jacques reluctantly live and work together, there are some intriguing ideas — the notion that a relative stranger like Jacques knew more about Susan at the end of her life than protective big brother Bailey; or maybe Jacques is conning Bailey — that are brushed aside for nonsense.

Wiley is supposed to be a scary, unlikable character, but Pope is simply not up to the task. I don’t understand why producers would cast such an inexperienced actor in what turned out to be a crucial role. (Wait, I think I know: Pope is an exec producer on the project.) In the end, Wiley turns out to be more annoying than antagonistic mostly because of Pope’s poor performance. Meanwhile, the striking, statuesque Janssen sticks out like a sore thumb on the Shore, but does good understated work that includes a natural rapport with Gandolfini.

Down the Shore takes its time meting out the part of the story that explains why Bailey feels he can’t challenge Wiley and alter his own life drastically. Unfortunately, it’s a carefully-constructed reveal that comes too late for us to truly connect with the characters, and the film limps to a hasty conclusion.

Down the Shore is presented in an aspect ratio of 1.78:1. The 1080p image is arrived at with an AVC MPEG-4 codec at an average of 26 mbps. Not surprisingly, the movie’s gloomy mood extends to its palette, which the Blu-ray reproduces faithfully. Obviously, this means colors don’t pop very well and the contrast is intentionally high in a few instances. There’s a solid amount of detail on close-ups, though the image occasionally goes a bit softer than I’m used to seeing from a high definition presentation. The film’s micro-budget roots are only evident during a few scenes taking place in darkened interiors that feature a massive amount of digital noise. Then again, the shabbiness goes well with the movie’s story and surroundings.

The Dolby TrueHD 5.1 track gives us a great sense of immersion, particularly during the scenes that take place near the water. Though the subs remain mostly quiet — the notable exception is a thunderstorm in the park — the rears are plenty busy cranking out ambient Shore noises like crashing waves and seagulls (as well as subtler noises when the action is away from the beach). Dialogue remains in the front speakers and comes through quite well.

The absence of special features is disappointing; Down the Shore sat on the shelf for a few years and the area where filming took place was destroyed by Superstorm Sandy. This is a (mostly) well-acted little film, but the small-scale (melo)drama of Down the Shore would probably play better on a stage than it does on screen.