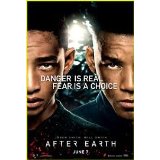 “Fear is not real. It is a product of thoughts you create. Do not misunderstand me. Danger is very real, but fear is a choice.”

It’s been seven years since father and son Will and Jaden Smith partnered up for Jaden’s first film role in The Pursuit of Happiness. Since then, Jaden has managed to forge a path similar to his father’s albeit his own starring in his blockbuster films The Day the Earth Stood Still and a reboot of 80’s popular franchise The Karate Kid. No doubt Will Smith looks upon his son’s accomplishments with pride, but no matter how fulfilling it may be to forge your own way, there is something to be said about the comforts of familiarity. Opportunity for a re-teaming comes in the form of the Shyamalan-directed dystopian film After Earth.

Set one thousand years in the future, Earth has become dangerous and uninhabitable. Humans have been forced to escape and resettle on a new planet outside our known solar system known as Nova Prime. New settlement does not come easy as the inhabitants of Nova Prime and the new settlers do battle and the inhabitants unleash the URSA, a genetically enhanced creature that hunts by sensing the fear of its prey. Salvation for the new settlers comes from one man, Cypher Raige (Will Smith) a member of the Ranger Corps who perfects the technique of “Ghosting,” the ability to purge oneself of all fear thereby making him completely invisible to the URSA. Under Raige’s leadership, the new settlers win out and settle into their new homes.

Some years after the conflict, Kitai Raige (Jaden Smith), Cypher’s son, is a cadet at the Ranger Corps eager to live up to his father’s legacy. With his father returning soon, Kitai tries but ultimately fails to earn advancement to Ranger before his father returns. Upon Cypher’s return, his wife urges him that it is time for him to get to know the son he has been neglecting. He decides to take Kitai with him on a routine patrol mission. En route their ship is destroyed by an asteroid storm and they crash land on the now evolved and deadly Earth. Critically injured, Cypher must entrust his son with the dangerous task of venturing out alone into a planet where everything has evolved to kill human beings to retrieve signal beacon that is their only hope for rescue.

Considering that this year is populated with several post-apocalyptic films with the recent release of Oblivion and the release of Elysium set for August, the idea of a film setting itself apart from the pack will be undoubtedly difficult; however, I do believe that After Earth pulled it off. This film makes me forgive Shyamalan for The Last Airbender. Although After Earth does have its drawn out moments and it lacks that patented Shyamalan “twist,” it builds a completely immersive world that is logical and completely possible. The detail put into the overall design of what Earth could become was surreal and yet still familiar as the designers opted to include some recognizable creatures with a few slight evolutionary upgrades.

Jaden is a new man in film, practically unrecognizable (voice or appearance) from the curly-haired boy he used to be, stepping out in front of his father and carrying the story on his back. Will, who also switched it up by withholding his charismatic charm in favor of being more of the strong silent type, plays a huge part in the story’s progression, but it is his son who brings the emotion and will reap the rewards. Another member of the cast worth mentioning is Zoe Kravitz; I won’t go into detail about her capacity in the film, but let’s just say in my opinion her role was essential to the dynamic between the father-son duo.

“Fear is a choice.” What a powerful quote, one that is likely to be the most memorable of the entire movie, fitting given that the principal theme of After Earth is overcoming fear. For the characters overcoming fear or “Ghosting” is the key to survival and for me the best aspect of the film.

Jeremy Butler is a film school graduate of the International Academy of Design and Technology. He is been writing for Upcomingdiscs since 2012; however, movies have played a big part of his life for much longer. Favorite genres include horror, science fiction/fantasy, and comedy. Favorite movies are V for Vendetta, Boondocks Saints, Kiss Kiss Bang Bang, and The Godfather.
Teen Wolf: Season Two Now You See Me