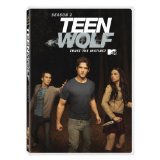 “You’re so unprepared for this…”

If you’re a fan of the 1985 comedy staring Michael J. Fox, that statement is particularly appropriate. We all remember the cute high school romp where Michael J. Fox discovers that his family has been hiding a long dark secret. They are werewolves. Now, the young teen finds himself having to deal with the usual growing pains of adolescence on top of dealing with the family curse. Before long he’s a basketball star and the most popular kid in school. A fun time was had by all. The film spawned a sequel with Jason Bateman and an animated series on television. It was all a hoot.

Scott McCall (Posey) is roaming the isolated woods near Beacon Hills with his friend Stiles (O’Brien). They’re searching for half of a missing girl’s body that Stiles has discovered might be somewhere in the woods. His father is the town’s Sheriff Stilinsky (Ashby) and Stiles overheard him call for a search party. But a body isn’t the worst thing that Scott can stumble upon in the dark woods. It’s what stumbles upon him that changes everything. He’s bitten by a werewolf, and his life will never be the same.

As Scott discovers more about his new alter-ego, he also discovers there are advantages. He can hear, see, and smell better than ever before. It comes in handy while eavesdropping. He’s also got super strength, which makes him a sudden star on the school’s lacrosse team. That’s going to put him on the bad side of former team star Jackson (Haynes). The two become bitter rivals with Jackson out to learn Scott’s secret. Then there’s Derek (Hoechlin), another werewolf who is trying to teach Scott to control his abilities in order to keep the secret for both of their sakes.

Finally, there’s Allison (Reed), the new girl in town, and they’ve fallen for each other. But this show takes a page out of Romeo and Juliet. Allison’s father (Bourne) and his sister Kate (Wagner) are werewolf hunters, and Kate wants to train Allison in the family business. Now we have a werewolf in love with a werewolf hunter. It’s like the son of Dracula falling for the daughter of Van Helsing, and this isn’t going to be good at all for their high school romance. Scott needs to keep his secret, or he might lose more than just Allison. All of them are trying to identify and kill the Alpha, which is bigger and stronger and might release Scott from his curse.

Fans of the original might be disappointed in the serious tone along with the many changes in the series. The change I dislike the most is switching basketball for lacrosse. I mean really, lacrosse? In my high school only the girls had a lacrosse team. There are many other changes beyond the tone. The curse is gotten through a bite and not a family tradition. But I think if you give it a chance you’ll find the changes are actually for the better in a television series. The tone is pretty much an asset here, although maybe they should have just started from scratch with a different name. It’s not like this is anything close enough to the older material.

The cast is made up of some of the most solid young actors on television. There is real chemistry here between them all, particularly between Tyler Posey and Crystal Reed who play Scott and Allison respectively. I get the sense that the actors might be as into each other as their characters. If not, it’s quite an amazing performance. Tyler Hoechlin has the requisite brooding character as Derek. Holland Roden plays Jackson’s girl Lydia, and she’s the requisite stuck up pretty girl in the group. Dylan O’Brien gets to be the goofy comic relief as Stiles. Together they play off each other quite nicely. The stories stay tight and interesting, and the show strikes a pretty good balance of providing a complicated mythology with plenty of twists and turns without straying into the too-cryptic department. Each episodes doles out some answers with its mystery, so you really feel like you’re making progress from week to week. It was entertaining enough for me to burn through all 13 episodes in less than two days.

The second season begins with Kate’s funeral as Jill Wagner leaves the show. Don’t worry. She’ll be replaced by an incredible performance from Michael Hogan who played the forceful Tigh on the new Battlestar Galactica. He plays the family patriarch Gerard who has come to town to push the Argent clan into high gear. He has a take-no-prisoner attitude and a secret that’s going to make the season end with a bang.

The show absolutely improved in its second year. The cast has really hit their strides, and the chemistry is outstanding. While everyone around her is transforming into werewolves Crystal Reed has transformed into an incredible actress. This was a big year for the Allison character. She’s being pushed emotionally and physically, and Reed delivers the outstanding performance of the series. She’s created a dynamic character who actually raises the bar for her castmates. I can’t say enough just how much I enjoyed her portrayal this season.

As one of the crew members states in an interview, they might have to change the name of the show to Teen Wolves. This season Derek has decided he wants to become an alpha and begins to pick off members of the cast and turning them into werewolves. Scott isn’t alone in his situation any more, but his life just got a lot more complicated. Gerard is an even more imposing foe than Kate ever was. He’s dealing with the new wolves in town and Derek’s pressure to join the growing pack. And just when you think he already has too much to deal with, a new creature arrives on the scene.

There is a shape-shifting reptilian creature killing people in town. It has poisonous claws that cause paralysis and enough time for the creature to do the slice-and-dice routine. To make matters worse, it’s a vengeance creature that is being controlled by someone with an ax to grind. It’s a danger to both humans and werewolves as well as the Argent family. Do they finally have a common enemy to join forces against? Don’t exactly count on that.

Extras on the set include deleted scenes, a gag reel, another shameless shirtless montage, and a behind the scenes feature. The show has really found its hairy legs this season, and I can’t wait to see what is coming. It’s an addictive show to be sure. “One bite and everything changes.”

Gino Sassani is a member of the Southeastern Film Critic's Association (SEFCA). He is a film and television critic based in Tampa, Florida. He's also the Senior Editor here at Upcomingdiscs. Gino started reviewing films in the early 1990's as a segment of his local television show Focus. He's an award-winning recording artist for Omega Records. Gino is currently working on his 8th album Merchants & Mercenaries. Gino took over Upcomingdiscs Dec 1, 2008. He works out of a home theater he calls The Reel World. Favorite films: The Godfather, The Godfather Part II, The Body Snatcher (Val Lewton film with Karloff and Lugosi, not the pod people film), Unforgiven, Gladiator, The Lion King, Jaws, Son Of Frankenstein, The Good, The Bad And The Ugly, and Monsters, Inc.
Only The Young / Tchoupitoulas After Earth