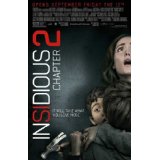 “Personally, I prefer the ghosts to people.”

The biggest reason Insidious became a surprise smash was because of its astoundingly straightforward and effective approach to delivering scares. The 2011 film came at the height of the “found footage” craze (and counted Paranormal Activity mastermind Oren Peli as one of its producers), yet it managed to resist the gimmick. It was also released less than six months after the Saw franchise limped to its bloody conclusion, so the fact that Insidious had a grand total of one fatality made it seem downright revolutionary. Unfortunately, the sequel doesn’t seem nearly as interested in standing out from the pack.

At this point, it’s not all that shocking when a micro-budgeted horror movie makes a killing at the box office. No filmmaker has had more success with this formula than James Wan, who kickstarted the Saw franchise in 2004 and had another major hit with The Conjuring earlier this year. In the time between those blockbuster thrillers, Wan re-teamed with Saw writer/actor Leigh Whannell for Insidious. The duo — along with the entire cast from the original film — returns for Chapter 2.

The sequel opens in 1986 with the first meeting between troubled young astral projector Josh Lambert and Elise Rainier, the medium who made him forget about his ability to mingle with troubled souls. (Lin Shaye played Elise in the first film, and her voice appears to be dubbed over Lindsay Seim, who plays her in the flashback; it’s a distracting, needless tactic because the younger actress strongly resembles Shaye.) This first encounter will be revisited later on, and one of the coolest things about Chapter 2 is that it also finds a way to loop back to some of the events from original movie.

The present-day action picks up in the immediate aftermath of the first film. If you haven’t seen Insidious, why are you reading a review to its sequel? the film ended with adult Josh (Patrick Wilson) rediscovering his ability in order to rescue similarly gifted son Dalton (Ty Simpkins). Unfortunately, the entity that haunted Josh in his childhood — known as the Bride in Black — returned to the world of the living in his stead and is currently occupying Josh’s body. His wife Renai (Rose Byrne) believes something is off because the family continues to be haunted by ghosts…and because Josh is clearly acting like an aggressive weirdo whose body is slowly decomposing. As Renai fights for her life and sanity, Josh’s mom Lorraine (Barbara Hershey) and bickering paranormal investigators Specs (Whannell) and Tucker (Angus Sampson) race to uncover the spirit’s twisted past.

My favorite thing about Insidious was the film’s excellent first two acts and the way they slyly subverted the conventions of “haunted house” films. (The story appeared to focus on the Typically Delirious Wife, but the Clueless Skeptical Husband turned out to be the key; also, the couple actually moved away when they suspected their house was haunted!) Chapter 2 sidles up to a neat idea — maybe some of the spirits messing with Renai and Co. aren’t malevolent — but too much of the movie focuses on the weakest part of the original film.

“Into The Further we go.”

The Further, we learned, is the plane of existence occupied by tortured souls. It also looks suspiciously like one of those amusement park haunted houses filled with performers who try to spook you while wearing vaguely Victorian garb and white-face makeup. (I’m surprised Johnny Depp hasn’t gotten in on that action.) So while developing an actual haunted house based on the film was a no-brainer, I found the renewed emphasis on easy jump scares (and the marginalization of even halfway relatable domestic drama) to be a letdown. And it’s not confined to the action in The Further. Lorraine, Specs and Tucker spend most of their time puttering around creepy abandoned hospitals and creepy abandoned homes; somebody needs to get a hold of Code Enforcement and raze these spooky death traps.

Also, where Insidious felt like a chilling breath of fresh air, Chapter 2 is more overtly referential to vastly superior films. The film is basically The Shining (with a family slowly realizing that dad is not quite himself to horrifying results) with a somewhat Psycho-tic backstory mixed in. The film makes the common mistake of over-explaining its monster: it’s the Hannibal Lecter problem. At the end of The Silence of the Lambs, audiences simply accepted that Lecter was a charismatic psychopath; by the time Hannibal Rising attempted to explain away his tragic upbringing, most of us were rolling our eyes. As a result, the closest doppelganger I can think of for Chapter 2 is actually The Ring Two, another underwhelming horror sequel that spent a good chunk of its running time ploddingly exploring the origins of the first movie’s evil entity.

To be clear, Chapter 2 is better than The Ring Two. Wan is a talented, stylish showman who always keeps things visually interesting. The film features some impressive set pieces — Lorraine’s house appears to have an unusually high number of doors and walkways — even if it looks like the director used up all his meaningful scares for The Conjuring. Joseph Bishara’s menacing score once again deserves a good amount of credit for helping establish the film’s unsettling atmosphere. The niftiest addition in Chapter 2 is a dice set used by fellow medium Carl (Steve Coulter) to make contact with the undead. (Thanks to this movie, I’ll be looking for hidden messages from the great beyond next time I play Boggle.) Wan also frames Wilson in aggressively sinister angles, which suggests the filmmakers are aware of the storyline’s absurdity. The takeaway winds up being that this malevolent spirit is just comically bad at pretending to be Josh.

Wilson has a tough acting challenge, and sometimes his work comes off campy. (And not always on purpose.) Byrne gives another magnificently freaked-out performance, while young Ty Simpkins impresses once again with limited screen time. (And I’m not just talking about Dalton’s unintentionally hilarious ability to fall asleep on command.) Hershey gets more screen time, but so do Whannell and Sampson as the goofy, polarizing ghostbusters from the first film. I found their shtick to be somewhat jarring in the more serious Insidious, but it wasn’t as distracting in the sillier sequel.

Wan, who is next slated to direct the seventh movie in the Fast and Furious franchise, has been telling people he’s finished with the horror genre. But that doesn’t necessarily mean this is the end of the line for the Insidious films. In fact, the last scene in Chapter 2 is a tacked-on, shameless set-up for a potential sequel that will absolutely be made if the box office numbers for this film are good enough. (And I suspect they will be.) So while Wan may be done with Insidious, “it’s not done with us.”