Posted in: Disc Reviews by William O'Donnell on September 12th, 2013 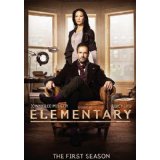 Modernizing Sherlock Holmes has been a popular trend in film and television lately. We have seen two slick action film adaptations courtesy of Guy Ritchie (Sherlock Holmes and its sequel), a contemporary BBC adaptation (Sherlock) and now there is Elementary, which transplants Sherlock Holmes and his loyal companion Watson from Victorian Era England to modern USA (New York, more specifically).

Jonny Lee Miller’s portrayal of Holmes makes me want to start drawing comparisons to the title character in the medical drama House. Both shows surround an eccentric, drug-addict savant who blazes beyond socially acceptable behavior to a series of “aha!” moments. Granted, said “aha!” moments are much less contrived and formulaic than they are in House. It takes a little while for the show to get it’s legs, but it does. The creators are clearly hoping the eccentric charm of Holmes can shoulder the burden of maintaining audience interest. Said eccentricity can come off a bit aimless at first. Sherlock has the ability examine people almost perfectly, yet the writers do not seem to have the character fully figured out, and there are too many moments where Holmes’ odd behavior seems a bit tacked on, such as when he hypnotizes himself to get through an addiction support group meeting.

Each episode features a mildly captivating crime puzzle for Holmes to solve. Holmes’ person connections to the crimes he investigates until the first season’s climax brings about this show’s adaptation of Holmes’ arch-nemesis Moriarty. The final two episodes are linked together into one story on this DVD set, and it makes for an engrossing thriller with an interesting twist to the Moriarty character and his relationship to Holmes.

Lucy Liu plays Watson. This incarnation of the classic character is a disgraced former surgeon who is assigned to keep Holmes from falling back into his heroin addiction. Very soon she begins assisting him in his investigations as she demonstrates a great aptitude for it. The platonic chemistry between Holmes and Watson is a bit of an issue for this show. Watson is more a babysitter than partner, but they do start to grow closer as the season progresses. By the time we reach the season finale, they are able to have a very touching (and unsurprisingly quirky) moment. There is no real hint of romantic connection between them, which I enjoy. This show avoids the laziest possible device for character tension, and I applaud it for that.

For you non-bookworms out there, Holmes’ drug use is actually taken from the original stories by Sir Arthur Conan Doyle. There are numerous references to Holmes use of various drugs and stimulants, many coming from Watson’s perspective, which means that this adaptations method of having Watson be a caretaker of Holmes is closer related to the original than one might assume.

Widescreen 1.78:1. The picture quality is admirably clear. Some of the flesh tones look a bit pasty at times…but that might be because we’re dealing with a British lead character.

Dolby Digital 5.1 and Stereo are both available. Some bits of dialog seem to drop away. Aside from that the sound mix is decent. The f/x and music are divided around the Surrounding speakers, but the majority seems to be blasting from the frontmost speakers.

The features in this set are a collection of the various promos created and aired before the show debuted. Because of their promotional nature, they do not offer the deepest insight into the creation of the series, but at least there is a good volume of them.

Holmes Sweet Holmes: A self-congratulatory series of interviews with creators and cast members that is quite typical with TV drama DVD releases.

On Set Tour With Lucy Liu: A very brief, lightly informative walk through a couple of their stage setups. Looks like it would be wedged amongst the fluffy segments in an entertainment news program.

The Power Of Observation: A web series that is the most satisfying of all the features. Much of it has that overly fluffy vibe of the other features but some, such as “Devil in the Details” which talks about the props and sets of this production, stand out as being genuinely interesting.

This series has started something that could bring about some interesting stories in its second season. These days a crime show that isn’t contrived, cheesy or sequestered to cable is a rare find. Enjoy this for any of those reasons.