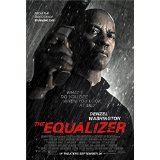 “Odds against you? Need help? Call the Equalizer.”

That familiar classified ad — which receives a clever update toward the end of this film — and a hero named “Robert McCall” are about the only things this bloody, big-screen adaptation has in common with the TV show that (allegedly) inspired it. And that’s fine, especially when you consider a large portion of this movie’s audience is probably not slavishly devoted to a CBS crime drama from the 1980s. (Assuming they’ve seen it at all.) The bigger issue is that, beyond it starring one of the world’s best and most charismatic movie stars, there’s not a ton that’s new or particularly interesting about The Equalizer.

Denzel Washington stars as McCall, who is leading a quiet, solitary life in Boston when we meet him at the start of the film. McCall works at a Home Depot-style store and casually deflects questions about his mysterious past. He’s a disciplined creature of habit who takes the time to help a co-worker (Johnny Skourtis) achieve his dream of becoming a security guard. McCall also banters with troubled, young aspiring singer Teri (Chloe Grace Moretz) at his preferred diner.

Unfortunately, Teri is mixed up with Russian mobsters who eventually threaten her life. As a result, McCall is compelled to channel the lethal, brutally-efficient skills he honed in his former life as a covert ops agent. Once he reverts back to his old ways, the movie suddenly (and conveniently) presents McCall with several instances of injustice that he can “equalize.” His actions eventually attract the attention of a dangerous, equally detail-oriented Russian mob enforcer named Teddy (Marton Csokas) and the corrupt cops in his employ.

The Equalizer reunites Washington with Training Day director Antoine Fuqua, a filmmaker who best is known for staging flashy, gritty action. But I actually think Fuqua does his best work here in the early parts of the film that establish McCall’s routine. The movie opens with a deliberate pan across McCall’s apartment, which is as no-frills and pared down as the guy who inhabits it. (Washington’s McCall sports a bald dome and prefers plain, dark button-down dress shirts.) Fuqua also has the patience to let the camera zero in on McCall’s borderline-OCD economy of movement because he knows he’s got a magnetic movie star who can hold our attention.

During several instances, the director effectively ratchets up the tension prior to some bursts of hard-R violence, which is obviously many notches beyond what went down on the network TV show. However, a lot of what we see ultimately feels overly familiar or ludicrous. McCall’s meticulous, clockwork takedown of a room full of Russian baddies, for example, feels like what Guy Ritchie has been doing with his Sherlock Holmes action sequences, except with more blood and less flair. The film also climaxes with the umpteenth watery showdown and features what is probably the longest slo-mo walk away from an explosion in the history of cinema; it honestly felt like the 131-minute movie could’ve come in under two hours if they’d simply cut this sequence in half.

Washington is pretty great as McCall, but he probably should be by now. The actor has been playing some version of “the Equalizer” for years — most notably in Man on Fire, which came out exactly 10 years ago — and I suppose this movie just makes it more official. Washington brings his unending reservoir of calm and composure — even when he plays a fall-down drunk, it’s a fall-down drunk who can hide it extremely well — to McCall, whose cool and personable demeanor can turn icy at a moment’s notice.

For a while, it seems as if McCall and Teddy might be flip(ped out) sides of the same coin, but Csokas’ character becomes more generic and hopelessly overmatched as the movie goes along. Moretz, using a convincingly weary rasp, makes a strong impression, which is crucial given that she drops out of the action pretty early on. I also enjoyed David Harbour as overwhelmed corrupt cop Masters. Bill Pullman and Melissa Leo turn up as former colleagues of McCall’s; there are implied years (or decades) worth of history between McCall and those characters, but the sequence is ultimately too opaque to make a lasting impression.

The Equalizer is an odd-duck in that it seemed eager to change almost everything about the pre-existing property it adopted. (The action takes place in Boston rather than New York; McCall trades in his Jaguar for…the city bus?!) It’s obviously been turned into a star vehicle for Washington — who is also a producer — and it’s probably his most direct attempt at grabbing a piece of Liam Neeson’s butt-kicking-middle-age-guy pie. (Neeson, by the way, seemed like a more obvious choice to play a big-screen McCall; he’s a closer match to original Equalizer star Edward Woodward.)

For what it’s worth, this movie is definitely a crowd-pleaser, at least judging by the lively reaction at the screening I attended. Earlier this year, Sony brought back screenwriter Richard Wenk and announced plans for a sequel after early test screenings earned the highest scores for an R-rated movie in the studio’s history. Of course, cinema’s graveyard is littered with planned sequels and proposed franchises that never made it past a first installment, so we’ll still have to wait and see. I found this movie to be entertaining, if uninspiring. I’d be happy if any potential follow-up — which would have to be called The Sequel-izer, right? —heeded McCall’s advice: “progress, not perfection.”