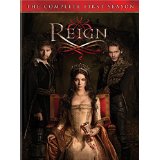 The creators of Reign — the CW’s campy, compulsively-watchable adaptation of the Mary, Queen of Scots saga — seem to be perfectly aware of their audience. I don’t think I’m talking out of school when I say no one turns to the CW — home of DC heroes, vampires, and other Supernatural beings — for gritty realism or historical accuracy. So it really shouldn’t be a surprise to find the monarch’s life has been turned into a handsome, soapy, frequently ridiculous drama that will nevertheless make European History teachers around the world facepalm in unison.

“Since Mary, Queen of Scotland, was a child, the English have wanted her country and her crown. She is sent to France to wed its next king — to save herself and her people — a bond that should protect her. But there are forces that conspire, forces of darkness, forces of the heart. Long may she reign.”

The series opens in 1557 with an attempt to poison Mary Stuart (Adelaide Kane), who has been hidden away in a convent since age 9. She is a valuable commodity to France’s King Henry II (Alan Van Sprang), who promised his son to the young queen in an attempt to forge an alliance with Scotland against England. Following the failed assassination, Mary is brought to French court to meet France’s next king and her future husband. But there are so many twists and turns in the debut season of Reign, that it’s not always clear exactly who that next king will be.

The title currently belongs to Francis (Toby Regbo), Henry’s son with Queen Catherine (Megan Follows). However, there’s also Sebastian (Torrance Coombs), the King’s bastard son with beloved mistress Diane de Poitiers (Anna Walton). Francis feels the weight of his responsibility to the country, while Sebastian — called “Bash” in this series — is more of a free spirit. As Mary and Francis begin to warm up to each other, Queen Catherine’s seer Nostradamus (Rossif Sutherland) has a troubling vision that forecasts doom for her son if he goes through with the marriage to Mary. With support from her ladies-in-waiting — Aylee (Jenessa Grant), Greer (Celina Sinden), Kenna (Caitlin Stasey), and Lola (Anna Popplewell) — Mary must dodge threats from enemies of Scotland and from an overprotective future mother-in-law. And I haven’t even mentioned the Castle Ghost or the seemingly supernatural pagan threat in the nearby Blood Wood.

As you can see, there’s a lot going on in this show. Reign is created by Laurie McCarthy and Stephanie Sengupta, though the latter writer/producer departed the series before the first episode aired. This particular drama seems like a handful for a single showrunner, given its large cast and the density of the schemes and counter-schemes at play. And although there are certainly some clunky bits of expository dialogue to remind us who is who and what is going on in the story, the series is surprisingly nimble.

It probably helps that the makers of this show have wisely decided to use history as a backdrop — rather than the foundation — for its characters’ melodramatic, bodice-ripping antics. Just as The White Queen did with the War of the Roses, Reign zeroes in on the soapy potential of all the political coupling that occurred during the Middle Ages while adding a healthy dash of supernatural spice. While The White Queen strove for more historical accuracy (and respectability), Reign goes all-in on the tragi-romantic notion that nobles were often not able to follow their hearts in terms of who they married. And it’s not just Mary ping-ponging between Francis and Bash; absolutely everyone on this show gets in on the action. One of Mary’s ladies-in-waiting begins an affair with the king, while another searching for a rich husband falls for a penniless servant. Some of those ladies-in-waiting even fall into bed with Francis and Bash. So much for girl code.

Reign also eagerly separates itself from stuffy historical dramas by heavily incorporating modern pop music, with a heavy emphasis on indie rock. (This show has more in common with Gossip Girl than you might expect from a series set in the 16th century.) The show’s theme, “Scotland”, is performed by The Lumineers, and Ep. 18/“No Exit” featured an extended (and cheekily clever) orchestral version of Lorde’s smash hit “Royals.” The modern, anachronistic music is sometimes jarring, but I mostly enjoyed the contrast with the production design that is otherwise faithful to the era. (Filming for the first season took place in Canada and Ireland.)

The attractive cast is largely unknown in the United States. The best-known actors are probably Follows (Anne of Green Gables) and Ep. 13/“The Consummation” guest star Amy Brenneman, who plays Mary’s mother. (The former Judging Amy star is married to executive producer Brad Silberling — City of Angels, Moonlight Mile — who also directed the pilot.) All of the series regulars also unanimously decided to adopt the same vaguely British accent, regardless of whether they are playing Scottish, French, or Italian characters.

All joking aside, the acting is actually pretty solid. Kane is a strong, alluring center; her indecision about Francis and Bash is less about not being able to settle on one, and more about genuinely feeling love for both. Regbo (blond, blander, and gallant) and Coombs (dark-haired, sensitive brooder) offer more of a physical contrast than an emotional one; they’re basically both good guys (so far), which I enjoyed because it makes the choice less obvious. The real standout in the cast is Follows, who absolutely devours every piece of ornate scenery as wicked, terrifying, poison aficionado Queen Catherine. Watching her go toe-to-toe with Mary is fun in an Emily Thorne/Victoria Grayson sort of way, especially when it becomes apparent that Mary is slowly morphing into Catherine.

The middle part of the season gets a bit repetitive as Mary and Francis keep breaking up and making up, but the action picks up steam toward the end as King Henry becomes more manically obsessed with power and sex. (Or maybe he’s simply becoming a maniac.) The finale features a pregnant woman going into labor, the ascension of a new king, and the arrival of a devastating, large-scale threat. And lest the show think viewers haven’t noticed, there’s still the matter of that Castle Ghost twisting in the wind somewhere.

Reign: The Complete First Season features all 22 episodes on five discs. The bonus material includes deleted scenes throughout the DVD set and two featurettes — “Reign: The Making of a Queen” and “The Authenticity of Reign: Re-creating the 16th Century” — that can be found on Disc 5. Those two featurettes — especially the latter, which focuses on the the series’ great production design and costumes — will make you wish Reign had been granted a Blu-ray release.

The show is (well-)made for fans of CW-style guilty pleasures rather than serious history buffs. It really is best to simply enjoy it as “historical fan fiction.” Season 2 premieres Oct. 2; “the ritual, the ceremony, the mystery…aren’t you curious?”

The Equalizer I Origins