Posted in: The Reel World by Archive Authors on October 28th, 2014 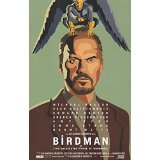 Wow! OMG! WTH! This is a towering achievement in every way. It is staggering. It is literally staggering; you will leave the theater drained because all your adrenaline will have been used up. Fragmentary, flowing, electric, and it shows the disintegrating of a man’s mind in a vibrant phantasmagoria. Any director in the world who sees this will slap himself in the face and say, “Why didn’t I do this!” It is a technical tour de force, and everyone in it delivers at full throttle. It is breathless and exhilarating and your mind will be blown. It’s a waste of time to compare this to anything else, since this is incomparable. There is nothing to compare it to. It stands alone. Sure, it’s a comedy. Yeah, it’s a drama, but what it really is is a whirlwind, a tornado, a cyclone, a tsunami of insanity. Everyone involved is fantastic, but Michael Keaton is front and center. Let me say, Batman is back! Wait, I mean Birdman.

Birdman is about an aging actor who refuses to reprise his big blockbuster franchise by making Birdman 4. Instead he has gone for broke and bet everything on a Broadway show that he has written, directs and stars in. It is based on a Raymond Carver short story, and nothing could be farther away from blockbuster. It is about integrity, but is he in over his head? He’s a movie star, and he has never done Broadway. He’s going to have to refinance the Malibu house even though his franchise has made billions. There are direct references to Iron Man and The Avengers as real world competition on entertainment news shows. Everyone is circling around him: mistress, girlfriend, ex-wife and daughter. None of them has every really connected with him, or he failed them all in some way. If one were to try and compare it to something it would be All That Jazz and Nine (or 8 ½ if you prefer the black and white non-musical). The difference is that the style of this movie is a new industry standard. It plays out as one handheld shot from beginning to end. It should be noted that it does not actually take place in real time, but the transitions are so seamless that you barely notice.

The average filmgoer probably won’t care, but filmmakers will be studying this film for years to come. Edward Norton, Emma Stone, Naomi Watts, Zach Galifianakis, Andrea Riseborough, Amy Ryan and Lindsay Duncan all support Keaton, and everyone hits a home run. The filming style was rigorous and demanding, requiring extremely long takes with copious dialog and elaborate choreography. The director and writer of the screenplay, Alejandro Gonzalez Inarritu, has had success with all his previous films. Amores Perros, 21 Grams, Babel and Biutiful have all won numerous awards. Babel, starring Brad Pitt and Cate Blanchett, is probably the best known and received seven nominations at the 2006 Academy Awards and won the Golden Globe for best drama. His style has always been adventurous and elusive, but Birdman raises the bar.

The real question is, what does much of it mean? Throughout from the very beginning the film veers from any concrete reality. One of the earliest shots is Keaton facing out a window floating in the air. Throughout he seems possessed by superpowers that he uses only when he is at his most irrational and out of control. He is frequently harassed by the alter ego of Birdman at moments of greatest weakness. The creative struggle and integrity and everything that gets in the way are the most consistent themes.

Riggan Thompson (Keaton) is clearly a man in desperate need of validation and renewal and rebirth. He is seeking relevance and desperately afraid of rejection. He doesn’t know how to love or how to accept love, and he knows that was his biggest mistake. He could have it all, but he doesn’t want it, and everything he does want seems out of his grasp. Could this be a similar story between character and actor? I hope Michael Keaton gets the love that has eluded Riggan Thompson. Oh, and I hope he gets an Oscar, too.