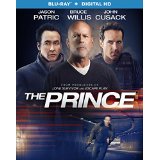 “That man brings hell with him wherever he goes.”

The “man” is supposed to be Paul Brennan (Jason Patric), a retired mob enforcer-turned-unassuming auto mechanic who reluctantly returns to his violent ways after his daughter goes missing. But the real culprit might be director Brian A. Miller. With The Prince and this year’s The Outsider, the director has made two consecutive sub-Taken crime dramas that lack the cohesion, refinement or energy to work even as satisfyingly junky action movies.

The Prince opens with a dream sequence, as we see the wife and daughter of powerful New Orleans crime boss Omar (Bruce Willis) get blown up in a car bomb intended for him. The dream actually belongs to Paul (Patric), a Mississippi mechanic who dotes on his college-age daughter Beth (Gia Mantegna). When a stranger answers Beth’s phone one day, Paul immediately becomes concerned and hops on a plane to track her down. He eventually connects with Angela (Jessica Lowndes), a vapid, troubled friend of Beth’s who reluctantly accompanies Paul on his search.

The journey takes them to New Orleans, which is where Omar still resides. (This is around the time we learn how Paul was connected to the car bombing that killed Omar’s family.) Suffice it to say Paul’s return to his old stomping grounds enrages Omar. As a result, Paul has to rely on his particular set of skills to not only find his daughter, but stave off his old nemesis. Paul also gets a second-act assist from a former partner-in-crime named Sam (John Cusack).

The prospect of having stars like Willis, Cusack, and Patric in the same movie was probably more exciting 20 years ago. But even though they’ve settled into the straight-to-DVD phase of their careers — at least when Willis isn’t cranking out cash-grab blockbuster sequels — I expected the trio to bring some of their star quality  to The Prince. Unfortunately, that simply doesn’t happen.

Patric — who had a supporting role in The Outsider — comes the closest as the film’s laconic badass. (Don’t let the Blu-ray cover fool you: despite being featured alongside Willis and Cusack, Patric alone plays a major role here.) Then again, maybe Patric fares the best because his character doesn’t say much, which means he doesn’t have to spit out the painful, tough-guy dialogue written by Andre Fabrizio and Jeremy Passmore. The script isn’t exactly elevated by Miller’s flat direction and storytelling. In fact, Miller’s stylistic peak comes during the lively opening credits, which detail New Orleans’ recent violent history via news headlines. After that, the movie’s shootouts and an early car chase are muddled and leave something to be desired in terms of excitement or ingenuity. At least Patric’s current heft makes him convincing as a guy who could beat up a group of punks.

In addition to populating the story with distractingly bad bit players that make the movie’s underworld feel instantly phony, the film squanders some potentially interesting ideas by focusing on the wrong things. For example, instead of really hammering home the idea that Paul’s daughter is no angel and having him discover just how far she had fallen, The Prince seems more interested in playing up the slightly icky relationship between Paul and college-age Angela. A movie like Taken succeeded because of the relentless, relatable single-mindedness of its Concerned Dad hero. The Prince, by comparison, goes on some unnecessary tangents. (Including the tangent that leads 50 Cent to pop up as a grinning drug dealer.)

Then again, as questionable as “Fitty’s” acting chops may be, at least the rapper actually seems excited to be in this movie. That’s much more than I can say for Willis or Cusack. Willis is the nominal villain, but his character simply wants revenge for having his family destroyed. Again, the movie doesn’t seem interested in fleshing out this potentially sympathetic side of the character. And Willis, in turn, doesn’t seem motivated to doing anything interesting with this character. His Omar can’t even be bothered to execute a subordinate himself; the job falls to a curiously dapper henchman played by South Korean pop star Rain.

At least Willis’ steely charisma pokes through a couple of times. Cusack has less than a handful of scenes, but always seems like he was woken up from a nap about two minutes before it was time to film. He does get to deliver the monologue that explains the title of the film — which feels like a stretch — but this otherwise continues his recent, dispiriting run of B-movie flicks. Cusack also seems to be continuing his slow transformation into Nicolas Cage; except Cage is at least likely do something insane/interesting in the crappy movies he cranks out. I actually wish there had been more about The Prince that was insane or interesting.

The Prince is presented in an aspect ratio of 2.40:1. The 1080p image is arrived at with an AVC MPEG-4 codec at an average of 17 mbps. The film opens with that intentionally soft, color-drained dream sequence. Otherwise, this is a fairly standard high-definition presentation. Sharpness and clarity are solid, if not anywhere near reference quality. There is just not a lot of fine detail on display beyond Patric’s stubble. Black levels are appropriately inky. The movie’s palette alternates nicely between warmer yellows/gold for early scenes in Mississippi to steely blue whenever Paul ventures into a trendy nightclub.

The DTS-HD Master Audio 5.1 track is not so much aggressive as it is active throughout the film. The subs crank out a strong boom during that opening car explosion and return when Paul ventures into a venue with thumping music. The surround sound field offers nice separation, despite the fact that there’s simply not much in the way of immersion here. The music by The Newton Brothers plays quite nicely with the dialogue and the little ambient noise there is. Dialogue comes through clearly. Not the most dynamic track by any means, but still serves the movie quite well.

Commentary with director Brian A. Miller and actor Jason Patric: Miller heroically tries to stay on topic while discussing the film’s themes and production, but Patric seems totally intent on trolling the director every chance he gets with his sarcastic, bone-dry sense of humor. It’s pretty amusing actually.

Capturing The Prince: Behind the Scenes: (9:58) A fairly basic “Making of” featurette. Miller states his intention to make a modern-day Western and specifically name-checks Clint Eastwood’s Unforgiven. (Bonus points for the lofty goal, even if he ultimately came up woefully short.) The cast and crew also discuss filming in Mobile, Ala., which doubled as New Orleans.

Extended Scenes: (10:28) There are six scenes, all of which represent longer versions of existing material from the film. The most notable ones involve moments that make the relationship between Paul and Angela more overtly romantic. Features a Play All option

Interviews with Cast & Crew: (14:10) There are separate segments with Miller, Patric, Cusack, Lowndes, 50 Cent, and Mantegna. These interviews provide the fodder for the brief soundbites in “Capturing The Prince”, but don’t offer any new or earth-shattering revelations. Features a Play All option.

Maybe next time, director Brian A. Miller would be better served trying to make an actual Western because his version of a “modern-day Western” ended up looking like a cheap Liam Neeson knockoff. It’s too bad Miller seems stuck in this revenge rut because I thought he showed some directorial promise with Officer Down.

The Prince feels longer than its slim 91 minute running time and mostly squanders a talented cast. With all of the film’s cliches and uninspired plotting, I can’t say I blame some of the actors for seeming like they wanted to be elsewhere. Probably best to skip this one and just wait a few months for the next Taken flick.