Posted in: Podcasts by Gino Sassani on February 4th, 2015 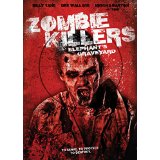 You’re going to be seeing a lot from Anchor Bay’s Zombie Killers: Elephant’s Graveyard. It’s a new and interesting zombie franchise from writer/director Harrison Smith. No, not the one who plays for my NFL Vikings. More on him later. (The director, not the football player). The film stars, among others Felissa Rose. You might remember her as the 13 year old baddie in Sleepaway Camp. She’s been busy lately. You can catch her in Zombie Killers. I caught up to her last week and I got to talk to her about both films…and more. The movie is out now. She was super excited to talk. Bang it here to listen in on my chat with Felissa Rose.

Gino Sassani is a member of the Southeastern Film Critic's Association (SEFCA). He is a film and television critic based in Tampa, Florida. He's also the Senior Editor here at Upcomingdiscs. Gino started reviewing films in the early 1990's as a segment of his local television show Focus. He's an award-winning recording artist for Omega Records. Gino is currently working on his 8th album Merchants & Mercenaries. Gino took over Upcomingdiscs Dec 1, 2008. He works out of a home theater he calls The Reel World. Favorite films: The Godfather, The Godfather Part II, The Body Snatcher (Val Lewton film with Karloff and Lugosi, not the pod people film), Unforgiven, Gladiator, The Lion King, Jaws, Son Of Frankenstein, The Good, The Bad And The Ugly, and Monsters, Inc.
A Little Game Exclusive Interview With Harrison Smith Writer/Director Of Zombie Killers: Elephant’s Graveyard