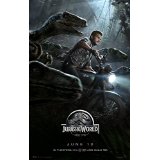 That’s the problem with sequels, isn’t it? There’s always the belief that you have to go bigger and stronger than you did before. It’s an ideal that is also reflected quite literally in the story of Jurassic World. You know what kills worse than dinosaurs? Expectations. It is those expectations that will turn what is a pretty solid action movie into a disappointment for so many. No doubt, Jurassic World is a fun and entertaining movie. But it’s not Jurassic Park, and the truth is it never could be. If you go to this movie hoping to recapture what you felt the first time you heard the words “Welcome to Jurassic Park”, it’s never going to happen here. Thank God that you will always have the original. It’s even out there in an impressive 3D conversion. You can watch it whenever you want. You have to approach Jurassic World as something almost totally different. If you can, there is fun to be had.

Just as it has been in real life, it’s now been 22 years since John Hammond put together his JurassicPark creation and disaster followed. Since that time the situation has been contained enough that we actually have a functioning theme park now called Jurassic World. There’s nary a mention of the original name and the events associated with it in the park itself. When an employee wears a JurassicPark shirt, he’s reminded that it was in bad taste and told never to wear it again. The gates are moving people by the score, but the novelty is beginning to wear off, and attendance is starting to drop. It’s the reality of any big park today. The solution is always the same. It’s time for a new envelope-pushing ride or attraction. When you already have dinosaurs, where can you go next? The answer is a newly created super-hybrid dinosaur called Indominus Rex. The dinosaur was originally called Diabolis Rex or D-Rex, but was changed mid-production.

Claire (Howard) has two jobs to perform. She has been tasked with overseeing the unveiling of this new dinosaur. That means enticing Verizon to be the creature’s sponsor. I can see the ads now. A huge Indominus Rex roar followed by “Can you hear me now”. It also means getting Owen (Pratt), a man she once dated, to check the animal’s paddock for potential security issues. That’s not going to easy, because they dated once, literally, and she doesn’t have a very high opinion of the man. Her second job is to care for and entertain her two nephews who are visiting as a distraction while their parents work out a divorce. Of course, the kids aren’t supposed to know about that part. Claire’s too busy and assigns the kids to her assistant. Yeah, that’s going to work out well.

Owen has been training raptors to respond to commands. This is very interesting to Ingen’s security chief Hoskins (D’Onofrio) who sees an opportunity here to offer them up as super soldiers to the military as a kind of dino-force to fight battles. Yeah, that sounds like a good idea.

When the Indominus Rex outsmarts the crew and escapes, Hoskins looks at it as the perfect chance to put his dino-soldiers in action and make some news to sell the program to the feds. Meanwhile there are tourists getting eaten, most notably by a flock of Pteronodans that escaped as Indominus Rex stomps his way through the park. What follows is what Dr. Malcolm once described in the second film :”Oh, yeah. Oooh, ahhh, that’s how it always starts. Then later there’s running and um, screaming.”

This is where Jurassic World differs significantly from the original film. What we have here is a straight-up action/adventure film. Much of that pulls out the typical high kill count, and most of that coming from stupid mistakes or outrageous circumstances. There’s really no new ground being broken once the screaming starts. It’s the same formula in a new wrapper. None of the interactions between humans and dinosaurs carry the nail-biting suspense of the kitchen scene in the original film. There’s not really any attempt to build anything close to that feel. Now, that doesn’t mean it isn’t an exhilarating ride with some wonderful special effects. Perhaps, the filmmakers took the only route that was honestly available to them. Let’s introduce some new dinosaurs including a genetically manipulated big baddie and just let the mayhem take completely over. From that point all of the character development we saw in the film’s first 20 minutes goes straight out of the window at 70 miles per hour, of course. Everything becomes about the adrenaline, and any emotional or character-driven moments are gone.

When it comes to what an actual Jurassic Park/World would look like, they got a lot of things right here. I live close enough to the Mouse House that I’ve gotten to spend many days in the world of the theme park. This movie captured the conventions of that world perfectly, from the $7 sodas to the kind of ride videos by celebrities preparing you for your experience. In this case it’s a humorous diversion by Jimmy Fallon playing himself in one of those pre-ride amusements. You have company sponsors putting their name… and their money … into various exhibits or attractions. The layout looks like it could have been pulled from almost any theme park map across the country.

The cast does what they can for a movie that isn’t really about people. Bryce Dallas Howard is trying her best to establish a strong corporate female role, but I have to say she mostly acts lost. When she tries to take control of a situation, it usually falls flat. I know there were complaints about that from the trailer, and everyone told us it was a misrepresentation of who the character is. No, it wasn’t. That’s exactly what she is. Vincent D’Onofrio is another character with strong possibilities, but he’s the most cardboard character in the film. We’ve seen his obsession before, and it just ends up sounding silly and ill-thought-out here. It’s not the actor’s fault. He makes the best of a sad situation, but there are moments you can almost see the actor about to roll his eyes before delivering rather stale villain material. There are the two boys who are meant to remind you of Hammond’s grandchildren. Fortunately, they are both better actors and characters. Unfortunately, the films uses them mostly as a device that never lives up to any potential. For too much of the film they are a red herring to where the real action is going on.

The only standout performance has to be Chris Pratt. It’s so easy to see why his star has risen so much in recent years. He’s the only character with any forcefulness and frankly the only one we really care enough about that we don’t want to see him become dino-chow. He comes the closest to offering the cautionary tale that was so much a part of the original film. Here it’s mostly a few throwaway lines at best.

Of course, the dinosaur effects are pretty amazing. But they were that 22 years ago. Recently I was amazed at how well those original effects held up when the movie was released in 3D. This movie is just as spectacular, but the images haven’t really improved. I see no quantum jump from that film to this. Again, it’s a case of more replacing better. They’re very good, to be sure. But we’re already used to that and perhaps more than a little jaded.

The film racks up the carnage and ends up as a kind of monster mash-up with a few dinosaurs getting into the fight. The T-Rex is made out as the hero and gets cheered by the audience when he makes his appearance, much like Clint Eastwood standing on the bridge waiting for the bad guys to come and get wasted. The film does that a lot. At times I felt like I was watching a western with dinosaurs as the gunslingers. The movie gives them almost human qualities that didn’t quite work out for me at all.

There’s going to be money made here, for sure. We are all hungry for more Jurassic adventures. The film uses BD Wong, the only returning character, as a set-up for future movies. This won’t be the last roar for the Jurassic movies. As long as they continue to make big money and deliver an entertaining ride they will not soon go extinct. I just hope the filmmakers don’t become as jaded as the audience. We need relatable characters in emotional situations. It would be too easy to fall back on formula. “They’re dinosaurs, wow enough.”

Gino Sassani is a member of the Southeastern Film Critic's Association (SEFCA). He is a film and television critic based in Tampa, Florida. He's also the Senior Editor here at Upcomingdiscs. Gino started reviewing films in the early 1990's as a segment of his local television show Focus. He's an award-winning recording artist for Omega Records. Gino is currently working on his 8th album Merchants & Mercenaries. Gino took over Upcomingdiscs Dec 1, 2008. He works out of a home theater he calls The Reel World. Favorite films: The Godfather, The Godfather Part II, The Body Snatcher (Val Lewton film with Karloff and Lugosi, not the pod people film), Unforgiven, Gladiator, The Lion King, Jaws, Son Of Frankenstein, The Good, The Bad And The Ugly, and Monsters, Inc.
Debug Christopher Lee Tribute (1922-2015)