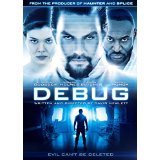 As a member of the Upcomingdiscs family, it probably isn’t a surprise that I am a fan of David Hewlett. Yes, Dr. Rodney McKay is a role we are most familiar with, but my appreciation of the good doctor goes a little deeper than the Stargate universe. I first became a fan of David Hewlett after watching him in Vincenzo Natali’s low-budget feature Cube (1997) and began looking to other films in which he was featured, such as Pin (1988) and Nothing (2003). His body of work as an actor goes much deeper than these films, but they are largely responsible for my fandom. With the release of his directorial debut A Dog’s Breakfast in 2007, David Hewlett graced us with a dark comedy that adequately demonstrated his knowledge of filmmaking. Seven years later, he tackles the sci-fi/horror genres with Debug.

The film follows criminal computer hackers and their supervisor, who are assigned to debug a neglected prison ship. Upon their arrival, we learn of a tension between squad members Mel (Kerr Hewitt) and Kaida (Jeananne Goossen) who quarrel over being squad leader. Ultimately their supervisor, Capra (Adrian Holmes), delegates this position to Mel, and the crew begins their mission. Unbeknownst to the team, the ship’s AI (Jason Momoa) has taken over the ship by killing all the prisoners, absorbing their life forces. Soon the squad realizes that their debugging mission’s stakes have risen from finally returning home, to leaving the ship alive.

Before viewing this film, you might think: “Humans against an AI in space? I’ve seen that before.” And you would be correct, as there are countless titles with similar plot lines. However, when reading reviews for this film prior to writing my own, that seems to be one of the biggest issues this film faces. I must agree that there is a rather strong homage to 2001: A Space Odyssey, but I don’t believe it should detract from the overall film. Debug might be following a rather worn-out plot line, but the visuals in the film pay a lovely homage to other sci-fi/horror giants. The opening scene and claustrophobic corridors of Alien (1979), the minimalistic set design and introduction of Cube (featuring David Hewlett as previously mentioned), along with several others. The point is, if you take issue with the worn-down plot, there are other recycled elements in the film that were treated with respect that not a lot of people recognize (thus far).

Underneath the homages, there are actually quite a few risks being taken in the film: most notably, the way in which the characters use their HUDs (heads-up displays) to communicate with each other and retrieve information. Not only do we see an impressive display of CG for the HUD, but also we see it from behind the display itself. In other words, you look through the holographic HUD straight into the characters’ faces (who, in turn, are looking back at you). I would call this a bold stylistic choice, as these scenes happen often and would typically be considered “breaking the fourth wall” with the absence of a HUD. This is an interesting choice, in that it works in a rather strange way. Where breaking the fourth wall is normally off-putting (as it directly addresses the audience), in Debug, it places you behind the HUD’s interface, successfully immersing you within the film itself: you become part of the program.

The film has other charms for horror fans, such as creatively gruesome death scenes, subtle (but awesome) physical and psychological torture, and occasional comedic scenes. Unfortunately, all of the film’s charm arrives a little late. With a rather slow start and setup, what actually makes the film fun gets buried underneath the homages, creating lopsidedness in audience attention. The slow-paced beginning allows the audience to nitpick the unoriginality of the homages long before the interesting and original filmmaking choices are introduced.

Overall, I am impressed with the creative cinematographic choices that were made, and I am always enthralled by a clever use of minimal space. The film just didn’t win me over in the way I wanted it to. Where it succeeds in creating a wonderful atmosphere through cinematography, mise-en-scène, and creative story elements, it lacks in the way in which the story is told. The first act feels rather empty, but if you are able to stay for the second and third acts, the movie does reward you nicely. I cannot say that I like the film more than A Dog’s Breakfast, but it does get me excited for David Hewlett’s future behind-the-camera projects.